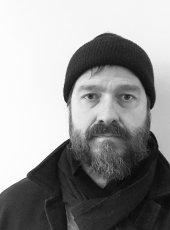 "If you jump / you will live a full life / while falling."
—from "You are so high in the tree" by Zachary Schomburg

2021-2022 U.P. Poet Laureate, M. Bartley Seigel, is author of This Is What They Say (Typecast Publishing); founding editor-in-chief of the new poetry letterpress, Simple Machines; and founding editor emeritus (alongside Roxane Gay) of the avant garde literary magazine, PANK.

Seigel's poetry has regularly appeared, both nationally and internationally, in journals such as About Place, Fourth River, Michigan Quarterly Review, Split Rock Review, Thrush, and elsewhere; and he’s been anthologized in And Here: 100 years of Upper Peninsula Writing, 1917-2017 (Michigan State University Press), and Rewilding: Poems for the Environment (Flexible Press), among others.

Critics have compared his poetry to that of Whitman, Sandberg, and Ginsberg. John Pursley said Seigel’s poems are not "afraid of the dirt under their nails—that stink of cigarettes and rotted wood, abandoned gas stations and stagnate water, of leaky faucets and kerosene, ex-lovers and old parole officers, of black eyes and bad blood…” while still offering "a startling and uncompromising look into our own, unilluminated lives.” Laura Kasiscke called him "dark and humorous...a poet of intensity and passion who sings against the backdrop of a world we know intimately, but which he has shown to us with new eyes...an important poet, writing about a time and a place that matter.”

Seigel's editorial work has been praised by the New York Times, and Travis Kurowski, in his book Paper Dreams: Writers and Editors on the American Literary Magazine said his work with PANK Magazine, "seemed to represent the zeitgeist of a generation — a literary turn towards diversity, queerness, and raw authenticity.”

Seigel lives in Houghton, Michigan, in Ojibwe homelands and Treaty of 1842 territory.