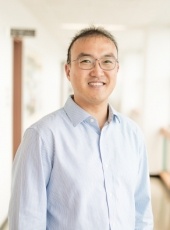 Sangyoon Han’s main research interest is to understand how mechanics affects cell biology, referred to as mechanobiology. He believes that the active force by living cells to the environment and associated molecular activities should be identified with non-perturbed system. For this, he uses a soft substrate and high-resolution live-cell fluorescence microscopy and develops novel force reconstruction technique, image modeling and machine learning technique to probe feedback between cellular structure (cytoskeleton and focal adhesions) and mechanical forces. He envisions this framework to be used to uncover mechanisms underlying rigidity sensing, migration and mechanotransduction behavior of normal cells. The ultimate applications of this framework are cancer cell metastasis, stem cell differentiation, and atherosclerosis, all of which are strong mechanotransduction-related physiological and patho-physiological events. These application studies will be done via collaboration. His lab releases a Matlab-based, open-source software for mechanobiology community.

Dr. Han likes working with energetic students. He finds great needs in cell biological studies of numerical engineers with solid knowledge about mechanics, computation and mathematics. He is also enthusiastic about building a physical device using bioMEMS for active force application to cells and tissue. He believes that engineers can contribute not only to biomedical industry but also significantly to fundamental biological science.

Dr. Sangyoon Han received his Ph.D. with Dr. Nathan Sniadecki from Mechanical Engineering at University of Washington (UW) in 2012 in the area of cell mechanics, multiphysics modeling, and bioMEMS. He joined for his postdoctoral training a Lab of Computational Cell Biology led by Dr. Gaudenz Danuser at Harvard Medical School in the department of Cell Biology, then moved to UT Southwestern, Cell Biology and Bioinformatics in 2014. Before his Ph.D. training, he received B.S and M.S. degree from Mechanical Engineering at Seoul National University, Seoul, Korea in 2002 and 2004.