As wind shapes the surface of the Earth, it pulls dust from dry, exposed land surfaces into the atmosphere. Xin Xi, an assistant professor in the Department of Geological and Mining Engineering and Sciences at Michigan Tech, uses observations and models to study the sources, transformation and transport of dust to assess its impact on climate and air quality.

Dust aerosol is not all bad, noted Xi. “Dust outflow from continental sources is considered a primary source of mineral micronutrients for the open ocean, where biological productivity is limited by the availability of iron.”

On the other hand, he added, dust deposited on the surface of snow can decrease its ability to reflect sunlight, impacting Earth’s surface energy balance and hydrology. And there are impacts on human health. “For human settlements located downwind, dust aerosol is a major safety and health hazard, with elevated concentrations of particulate matter and dust-borne pathogens,” said Xi. 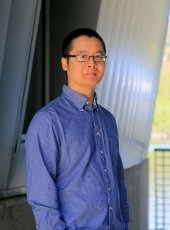 How much dust is there? According to scientific estimates, global annual dust emissions can range from 1 to 5 billion tons, shifting each year according to climate. “Climate controls the supply of erodible materials, the erosive force of surface winds and the transport route and residence time of dust particles in the air,” said Xi.

“The dust cycle is highly sensitive to climate,” he added. “Understanding dust variability and its response to climate is key to reducing the uncertainty of future climate projections. To do that, we need more fundamental knowledge to quantify the multifaceted impact of dust. That includes dust source locations and properties, dust variability and trends at different timescales — and all the governing factors and processes.”

Satellite remote sensing, a major source of information to study global dust variability, lacked the specifics Xi needed. “Spaceborne sensors offer an unprecedented view of large-scale aerosol transport events on a daily basis,” he said. “But they generally have a low sampling frequency, usually once per day. They also lack the data record length required to study variability over multiple decades in response to long-term climate change.”

"I believe the visibility record has not yet been used to its full potential, so I took on the effort to develop a homogenized dust-climate record."Xin Xi, Assistant Professor of Geological and Mining Engineering and Sciences

Using NOAA ISD records, Xi set out to create a new dataset for evaluating global dust, which he named duISD. Xi homogenized the NOAA records to remove nonclimatic factors, and plans to perform data fusion, combining multiple sources of information into consistent spatial and temporal scales. “The dust-climate connection exists on multiple temporal scales, from seasonal to interannual, multidecadal or even glacial-interglacial scales,” he explained.

Xi used the dataset to characterize dust variability and climate connections around the world. The results of his study are featured in an article in the Journal of Geophysical Research: Atmospheres.