Biologists recognize health concerns caused by a metalloid that contaminates soil and water all over the world. In some places like West Bengal, India, the profusion of arsenic has caused major health issues because it is a neurotoxin and carcinogen. Researchers at Michigan Technological University study how plants can help remove arsenic from contaminated rice paddies. 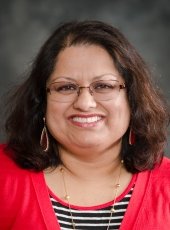 Rupali Datta, professor of biological sciences at Michigan Tech, along with a PhD student Manas Warke, study phytoremediation, which uses plants to remove contamination, and arsenic spirals, that is how arsenic gets tied up in plant matter and moved around. Warke’s doctoral work focuses an experiment using a phytoremediator fern called Pteris vittata that can reduce arsenic in rice paddies.

Arsenic is a metalloid and toxic to living beings, especially in inorganic forms. Arsenic pollution can happen naturally through volcanic eruptions, rock weathering, forest fires or can be caused by humans through herbicides, fertilizers and pesticides, burning coal and mining as well as treating wood.

In anaerobic soils that lack oxygen, inorganic arsenic is a problem and the predominant form is called arsenite. Chemical reactions, notably reductive dissolution of iron oxides and hydroxides in anaerobic waters, converts the less toxic arsenate to the more toxic arsenite. That means since rice grows in standing water, and West Bengal has iron-rich waters, it creates the perfect hang out space for arsenic. In fact, the amount of arsenic in rice is 10 times more than corn, wheat and rye. Where lots of arsenic can saturate, brood and linger in non-oxygenated or anaerobic waters, there is a potential for contaminated foods. Groundwater irrigation also results in arsenic enrichment.

Kim Roark is a MiCUP scholar from Delta College in downstate Michigan. The MiCUP Scholars Program is a collaborative effort between three Michigan community colleges and Michigan Tech, which brings students to Michigan Tech's campus for seven weeks in the summer to participate in research.

Pteris vittata is a ladder fern, sometimes called Chinese brake or Chinese ladder brake, and is a hyperaccumulator that can grow in arsenic-laden soil. Hyperaccumulators pull up contaminants, which are then stored in the plant’s tissues. Pteris vittata can lower arsenic accumulation in rice crops where the contamination cannot be remedied through other means because of groundwater irrigation and an easy and cost-effective agronomic approach is necessary.

Since 2018, Datta and Warke have developed a method involving crop rotation between Pteris vittata and rice to lower arsenic uptake in West Bengal paddies. In a Michigan Tech greenhouse, they simulate the crop rotation cycles by placing plants in cylindrical columns filled with arsenic-contaminated paddy soil from West Bengal. Then they recreate West Bengal’s rice -growing season in the greenhouse, using a similar irrigation and fertilization regime. During the dry season, when the field would be left fallow by the farmers, the researchers grow Pteris vittata ferns. At the end of each planting period, the team tracks the movement of arsenic from the soil to the ferns and record how much accumulates in rice grains.

Datta noted that the experiment, if successful, can move into a field study where the natural elements can now mingle with ferns in the environment, and if all goes well, the local governments or corporations can fund projects for larger scale clean up.

“It’s difficult to give a specific time, but if we receive the preliminary data from the greenhouse study showing the effectiveness of this approach, we can start a field study to see how it works out in the field,” Warke said. What is most exciting is that the second-year study has recently been measured and charted with promising results. Hopefully, farmers can use this simple and inexpensive technique to mitigate arsenic contamination of food crops.