Using manganese dioxide nanowires, a team led by a Michigan Technological University graduate student is coming up with better battery designs. The nanowires use a one-dimensional tunnel structure to help move lithium ions through the openings, which could help make batteries smaller and more efficient.

Yifei Yuan, the PhD candidate leading this research, is focusing on the materials science of batteries. That means he is most interested in the atomic composition and arrangement of a material—kind of like understanding the bricks and how they fit together in a Lego set. To study the building blocks of battery materials, he uses a Transmission Electron Microscope (TEM).

TEM work is a crucial part of Yuan's work. Using an electron beam, the TEM can not only determine what elements are in a material but also where they are and how they interact. In a battery, that means the research team can examine how the lithium ions are transported through the material in real time, which in turn determines the energy of a battery. 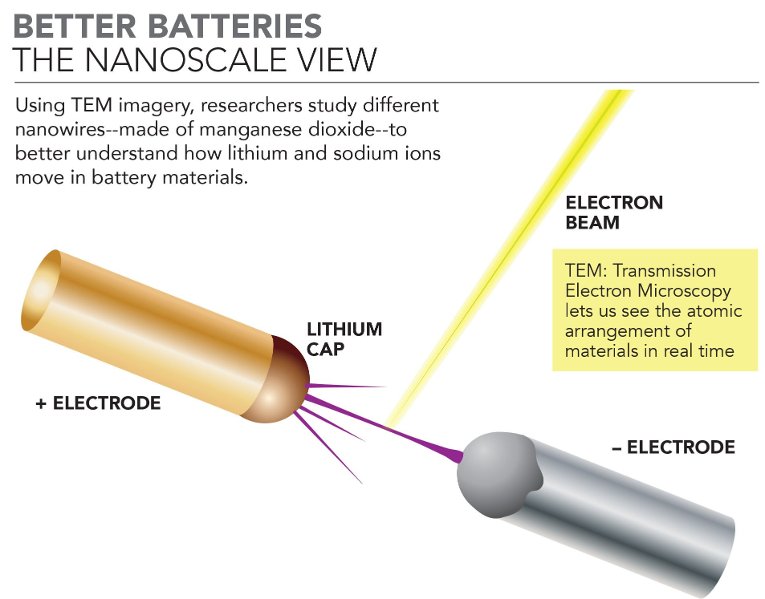 The key feature of lithium batteries is that they are rechargeable. Other ions besides lithium can work, like sodium or potassium; they are just not as widely used because lithium is smaller, making batteries lighter. The ultimate challenge with rechargeable ion batteries is basically structural: Given the chemical reactions taking place, a battery can only get so small.

The payoff is worth it, though. Improving a battery's efficiency—packing more punch into less space or material—means lighter laptops and phones as well as higher-quality wearable tech and utility-scale energy storage.

To make these improvements, Yuan says, we need to understand how ions transport a charge through a material—and how to reverse that during recharge. In the case of tunneled manganese dioxide nanowires, which have been widely studied as a cathode material for rechargeable batteries, there are some issues. Specifically, Yuan wants to figure out how lithium diffuses through the tunnels and affects the host structure stability.

Let's compare this to something we can see: Imagine human-made tunnels that transport cars and buses. People always want to make the traffic smooth inside the tunnels, and meanwhile, make sure that the tunnel walls are strong enough to resist any traffic accident or harsh weather conditions. Within nanowire tunnels, we want the same stability.

But the material is not perfect. After a few runs, the storage capacity decays, and the tunnel structures can even collapse.

"Similar problems also happen in human-made tunnels from traffic jams, road destruction or partial tunnel collapse, but because of the scale, we can easily find the failure mechanisms of these tunnels—it's a lot harder in the ultra-small tunnels of a nanowire."Yifei Yuan

Traditional methods like x-ray diffraction or impedance spectrum provide complex data that are difficult to interpret, and no direct visual imaging of the tunneled structures can be provided. What’s worse, they can't show what is happening in real time during the battery cycling, causing the inevitable loss of important information.

Data gathered by a TEM, on the other hand, can.

Yuan and his co-authors were able to watch the evolution of their constructed tunnels, publishing their findings in two studies published recently in Nano Letters and Nano Energy. They observed that repeated insertion and extraction of lithium and sodium ions caused the tunnels to expand out of sync with other parts of the tunnel. In other words, they were able to figure out where the traffic jam and tunnel instability were starting.

In addition, since lithium is much smaller than sodium, the tunnel stability during lithium transport showed significant improvement compared to sodium transport.

“Imagine how you feel standing inside the human-made tunnel," Yuan says. “It is scarier when a giant truck passes you than when a small car does, and you could probably sense the shaking of the tunnel, which is definitely undesired.”

The next steps for the research are to continue refining the process and characterizing the manganese oxide nanowires, especially during tunnel failure. Better understanding their role in electrode materials would lead to improved—and potentially less expensive—options for lightweight, powerful ion batteries.

Now let's dig deeper into the material itself. After all, these tunnels don't construct themselves—Yuan does.

Throughout his graduate work, Yuan has worked on a specific growth mechanism to create tunnels in the metal oxide nanowires. Simply put, attaching the nanowires is like applying mortar between bricks. And, much like DIY patio stonemason posts on Pinterest, there's more nuance to the process than first meets the eye.

"Think of it like a house: You have different bricks and different ways to build a house—we're trying to chemically and physically modify the bricks to change how they attach together in order to make a better structure."Yifei Yuan

The specific technique Yuan uses is an oriented attachment mechanism, which eliminates initial irregularity and scales up well-ordered atomic arrangements. Starting with a good brick surface makes for a stronger structure later. The manganese dioxide nanowires Yuan uses have to be specially grown to get the right structure, which is detailed in a study published in ACS Nano earlier this year.

The TEM enables Yuan and his team to get a base understanding of the atomic structure and then watch how carefully constructed manganese dioxide nanowires interact with lithium ions.

“Based on the fundamental understanding of this oriented attachment growth mechanism”, said Yuan, “we aim to achieve the controlled synthesis and growth of different morphologies via selective surface engineering, which is currently one of the advanced frontiers in nanotechnology.”

The new discovery has been comprehensively discussed in three high profile journals (Nano Letters, ACS Nano and Nano Energy) in the field of nanotechnology and energy science. The lead author, Yifei Yuan, is a PhD candidate working with Reza Shahbazian-Yassar, an adjunct professor of materials science and engineering at Michigan Tech.  The two partnered with Gregory Odegard at Michigan Tech, Jun Lu, Khalil Amin, and Christopher Johnson at Argonne National Laboratory, Saiful Islam at University of Bath in the UK, and Robert Klie at University of Illinois at Chicago. Yuan and the team used the transmission electron microscope (TEM) facility at the University of Chicago at Illinois where Shahbazian-Yassar is an associate professor of mechanical engineering.

Seeing atomic structures at the nanoscale is difficult but crucial in the development of new materials. A transmission electron microscope (TEM) helps researchers look at atomic arrangements in real time.

The equipment works by shooting a beam of electrons through a very thin slice of a material. Different elements interact with the electron beam, creating an image of the atomic structure. Also, that beam can run over a duration of time, offering insight into how a material's atomic structure can be altered.

The new TEM on campus is part of the Applied Chemical and Morphological Analysis Lab run by Owen Mills. Contact him at opmills@mtu.edu or 906-369-1875.