Any day spent doing research on the water is a good day for Michigan Technological University students getting to know the greatest of the Great Lakes.

A boatload of Huskies ranging from undergraduates to doctoral candidates learned and practiced research techniques in the “Lake Superior Exploration” course led by ecosystem ecologist Amy Marcarelli. The group traveled the shoreline of Upper Michigan’s Keweenaw Peninsula aboard the University research vessel Agassiz this summer, taking dozens of water samples and performing other fieldwork that helped lay groundwork for future Michigan Tech research projects and their own careers.

"Over the side, Captain?"

Marcarelli, associate professor of biological sciences, waits for confirmation from RV Agassiz Captain Stephen Roblee before she deploys a Niskin Bottle off the side of the ship’s rear deck. The bottle, open at both ends, is closed with a weighted trigger to obtain water samples at specific depths — in this case, a sampling at 134 meters.

As the bottle dangles from a block-and-tackle over the shining deep-blue waters of Lake Superior, environmental engineering master’s student Mahta Naziri sits nearby, ready to pay out and pull in the CTD meter (conductivity, temperature, depth) attached to a slender line coiled in a bucket.

The meter is retrieved, and the temperature data is downloaded and plotted on a laptop, revealing a textbook-sharp thermocline — the drop off between warmer surface water and frigid deeper water.

In the meantime, Roblee calls the group over to look at the thermocline on the screen of the depth sounder, which is detecting the change in water density that occurs when water changes temperature — typically this wouldn’t be so dramatically apparent on the boat’s instrumentation.

But there’s nothing typical about Lake Superior. Or these students. Naziri, for example, doesn’t know how to swim; that didn’t stop the environmental engineer from venturing out on the largest freshwater lake on Earth.

"I love the water, and I wanted to know more," said Naziri, whose background is in chemical engineering and whose recent work includes researching metalimnetic oxygen minima in Green Lake, Wisconsin. She took the course, a week-long series of field expeditions circumnavigating the Keweenaw Peninsula, followed by lab analysis and presentation of a final project, to learn more about sensors, sampling, geology and biology of the lake.

"I have to be outside. I have to do things with my hands. This is all about that."Mahta Naziri, graduate student, environmental engineering

It was also the first time out on Lake Superior for Sarah Kiszelik, an undergraduate transfer student from Manistee, Michigan. The scenery was a close second to her favorite part of the course: "I really like the water sampling."

Whether it's Atlantic Coast tilefish populations, surface water quality or microbial impacts on aquatic populations, most of the students on the boat are pursuing careers directly related to water. But the course is open to all students, like fourth-year forestry and wildlife ecology major Greg Horton. “I thought it would be an interesting experience, being out on the big lake,” he said. “I wanted to do sampling. It’s a bonus to learn new stuff.”

Lydia Nicholas, in her third year of biology studies with an ecology and aquatics focus, said she was really excited when she saw this kind of course is available at Michigan Tech. "I love being on the water and learning new research methods," she said. The diversity of the Lake was readily apparent: "We see how the bottom changes, sampling at so many sites."

The course covered a lot of ground (and water) and that — rather than a crash course in limnology — was exactly the point, said Marcarelli, whose research focuses on nitrogen and carbon cycling in streams and lakes, and how human activities like altering habitat and introducing species affect aquatic ecosystems. 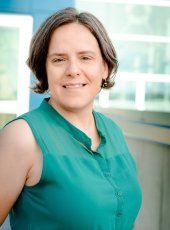 “The course is a quick but holistic view of the different aspects of Lake Superior where we could draw in people doing research around the lake,” she said.

The exposure to the what, how and why of research included more than a dozen guest scientists and other experts, including Stephen Techtmann, an assistant professor of biological sciences, who shared their work, ranging from offshore nutrients and water column characteristics to river-plume sampling and the near-shore dynamics of Lake Superior, which has thousands of tributaries. Pengfei Xue shared his work in modeling for lake currents, climate prediction, and other environmental research. An associate professor of civil and environmental engineering, Xue directs the Numerical Geophysical Fluid Dynamics Laboratory at Michigan Tech’s Great Lakes Research Center (GLRC). The GLRC is a hub for interdisciplinary fresh water research.

Marcarelli wants her students to cultivate the big-picture critical thinking behind research, considering the human decisions about what is important and also the inherent constraints of the work researchers choose to pursue. Whether it’s light, temperature, nutrients, sound or toxins, the need for comprehensive, connected sampling is continual. Available information is evolving and the challenges are significant.

“We measure what we can,” Marcarelli said.

Students in the course considered emerging research questions along with ongoing quandaries, like what to do about the encroaching stamp sands affecting the culturally and economically valuable Buffalo Reef fishery off Gay, Michigan on Keweenaw Peninsula’s south shore.

But before the group learned more about remediation plans for Buffalo Reef, they visited Keweenaw Bay Indian Community Natural Resources Department to learn about Ojibwa ecological knowledge and ongoing environmental projects, including the fishery tucked in at the foot of Lake Superior.

“I intentionally planned that visit first,” said Marcarelli, “to get that place of connection between science, remediation and cultural values.”

Students also got a hands-on introduction to one of the GLRC’s first-of-its-kind underwater autonomous vehicles.

GLRC Director Andrew Barnard, whose acoustics work encompasses noise control methods for underwater electromechanical machines and the use of marine autonomous vehicles in commercial and defense applications, came aboard for deployment of the Iver3.

“I want to get to know Lake Superior,” said first-year PhD candidate Kenny Larsen, an environmental engineer who researches broad spectrum surface water quality and whose advisor Cory McDonald was also a guest scientist, addressing the knowns and unknowns of nutrient cycling in Lake Superior.

While leaping dolphins are a quintessential saltwater sight, the Lake Superior explorers spotted something no less interesting and perhaps more rarely seen, on the south shore of the peninsula: surfacing sturgeon. On the north shore, they also kept their eyes peeled for the 1,000-foot lakers plying their way in the shipping lanes between Whitefish Point, on the east end of the lake, and the port of Duluth, Minnesota. Marcarelli showed them how to identify the bulk carrier Algoma Strongfield, using automatic identification tracking (AIS), which displays everything from the vessel's name to its speed, heading and type of cargo.

Roblee provided an impromptu history lesson about the first two ports on the Keweenaw Peninsula, including Eagle River, which has no natural bay and where the state geologist Douglass Houghton set off from and was lost to the lake on October 13, 1845, when his boat reportedly capsized in stormy seas off a treacherous four-foot reef.

On the last day in the field, the class cruised the north shore from Copper Harbor, headed to the GLRC docks on Michigan Tech’s campus in Houghton. As the lighthouses clicked by — Copper Harbor, Eagle Harbor, to the Upper Entry bookended by a state and a township park — flocks of beachcombers were spotted seeking agates and relaxation under a cumulus-pouffed aquamarine sky. A classic Lake Superior summer day. The Agassiz geared up to cruising speed, throwing sun-bedazzled diamond spray in her wake. Lulled by the humming engines and fresh air, a few explorers take brief naps. Others snacked or simply watched the entrancing vista of sky and shore, intersected by the land’s verdant green horizon.

“I grew up here. It was fun to see it from a different, scientific perspective,” said Laura Schaerer, who’s in the second year of her master’s studies in microbiology.

She appreciated the geological components of the program that Marcarelli included, capitalizing on the expertise of Jim DeGraff, research professor in geological and mining engineering and sciences, whose work includes mapping the Keweenaw Fault. Students studied Lake Superior coastal geology, which is strikingly different depending on locale: sandy bays and variegated sandstone cliffs characterize the gentler south shore, giving way to the craggy, rugged north shore, dominated by the oldest lava outpourings in the world.

Geology was also a favorite aspect of the course for Kaitlyn Dawson, a second-year master’s student majoring in biology. “I wanted to learn more about the Great Lakes and the fishing environment,” she said. “I love fish and want to work in fisheries management and conservation.”

Before the vessel enters Keweenaw Waterway, or “the canal,” as it’s locally known, the group made a final stop at Lake Superior Data Buoy 45023. GLRC-maintained, it is a component of the Great Lakes Observing System.

“It’s our part of a greater effort — a central database all over the world that’s useful for modeling,” Marcarelli explained, encouraging students to Google the buoy for wave height, wind speed, air temperature and other data. Like Michigan Tech’s other buoys, including the south entry of the waterway and the Straits of Mackinac, this buoy is configured to accommodate a variety of sensors useful for current and future research.

The near-shore location of the buoy is also important.

“Limnologists often go to the deepest part,” Marcarelli said. “On a lake this big, near shore and offshore can be quite different.”

Like the buoy, data collected by students during the course becomes a useful part of an increasingly interconnected and cohesive network. Their fieldwork is a real contribution to projects ranging from mercury analysis in benthic samples collected off Gay and Bete Grise, Michigan, to potential underwater acoustic defense research.

“I wanted to use samples in the context of actual research questions,” Marcarelli said.

The Agassiz slowed as it entered the no-wake zone. Time for presentation practice; graduate students in the group informally present their work. Then it’s time for selfies as the boat passes under the iconic Portage Lake Lift Bridge to the GLRC docks on the campus shoreline.

Lab activities, data analysis and student presentations finalized the learning experience. But for some, the time on the water already led to important decisions.

"I've always been interested in water chemistry. Being on the boat has solidified what I want to do for a living."Sarah Kiszelik, environmental chemistry