Off the coast of Gay, a small northern Michigan hamlet in the Keweenaw Peninsula, a potential environmental catastrophe lurks beneath the surface.

Mine tailings, known locally as stamp sands, are the remains of milling copper 100 years ago. The sands, dark in color, were piled on the edge of Lake Superior near Gay during milling operations. Constant wave action has caused the sands to migrate southwest along the shoreline of Grand Traverse Bay. The original sands pile was 22.7 million metric tons. Now just 2.4 million metric tons remain.

The stamp sands are covering the white sand beaches in the area, damaging the landscape for locals and tourists alike. The sands also have a high copper concentration (about two-eighths of a percent), which is toxic to fish and other organisms that live in Grand Traverse Bay. Under the waters of the bay is Buffalo Reef, a large boulder and cobble field where 20 percent of the southern Lake Superior whitefish and lake trout spawn. The fishery is valued at more than $5 million annually.

Watch Stamp Sands on the Shore of Lake Superior video 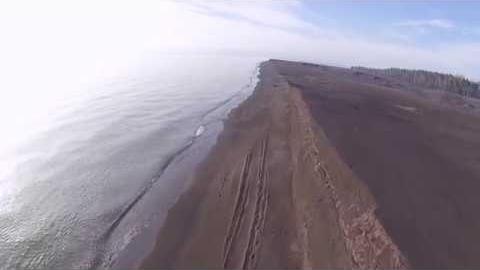 Stamp Sands on the Shore of Lake Superior

Yet Lake Superior’s waves are slowly spreading the stamp sands over the reef; more than 35 percent of the reef is already buried. The sands strip the organic film that coats the rocks, killing benthic organisms that fish eat. The sands also fill in the spaces between the boulders and cobbles, and the fish are no longer able to lay their eggs there.

It's estimated that without action, more than 60 percent of the reef will be smothered by the sands by 2028. To prevent such a catastrophe from happening, a partnership between Michigan Tech researchers, the Keweenaw Bay Indian Community, state and federal agencies, area businesses and community members seeks to generate long-term solutions to the problem before it’s too late.

Many Brains Are Better Than One

Last year, the Michigan Department of Natural Resources (DNR) dredged the Grand Traverse Harbor mouth as a stop-gap to prevent the river from backing up and flooding the yards and homes of local residents. However, the large storm in late October 2017 that produced record-setting waves completely filled in what the DNR had removed. Clearly, a longer-term solution is necessary.

Working together, the partners will triangulate their research to come up with a permanent solution to stop the spread of the sands.

“Buffalo Reef is an enormous breeding field—its contribution is 22 percent of total commercial fish along the southern side of Lake Superior,” says Charles Kerfoot, a professor of biological sciences and director of Lake Superior Ecosystem Research Center. Kerfoot’s efforts have been instrumental to bringing the many partners on the project together. “These are big, important numbers. This is a serious issue and there is reason for concern.”

Researchers at Michigan Tech are approaching the issue from multiple angles:

Tribal communities are major stakeholders.  “The Keweenaw Bay Indian Community as well as Ojibwa Lake Superior band tribes are and always have been fishing tribes that use these resources to sustain our communities,” says Lori Ann Sherman, KBIC’s natural resources director. “It’s spiritual, cultural, medicinal and economic. As a tribe, we don’t just look at this generation, we always look toward the seventh generation.”

"We want these (fish spawning) beds to be healthy for future generations. The research Michigan Tech can provide is invaluable. The working relationship Tech has with the Buffalo Reef steering committee allows us to solve this issue impacting Buffalo Reef."Lori Ann Sherman

Working in partnership toward creative solutions also requires understanding where we came from as a society so we can improve in the future.

“We all also need to be careful not to assume that cultural history and the preservation of ancient or industrial-era heritage will conflict with environmental cleanup and restoration. Wise decisions can accomplish both of these objectives, helping strengthen cultures while also improving ecological conditions.”

A number of options already have been proposed. They include dredging operations every few years; burying the sands in deeper water farther away from the harbor; removing the sands to the White Pine mine tailings pond; and removing as much of the sands as possible from beaches and underwater and returning them to the original pile with a vegetated cap on top. Agency officials are the first to say that any and all ideas to solve the problem are on the table.

In 2018, the EPA and the Michigan DNR will undertake a $3 million dredging project to buy Grand Traverse Bay some time as plans come together.

“EPA is fully supporting this year’s dredging project. But we cannot fund this entire project ourselves,” says Scott Cieniawski, an engineer with the EPA’s Great Lakes region. “This is a problem 100 years in the making. The scope of this project is huge. The goal is that five years from today we will have a solution. We do not want to be here for the next 100 years putting $5 million a year into this. We want long-term solutions.”

The overarching goal within the next five years is to develop a long-term management plan to protect Buffalo Reef, Grand Traverse Harbor and the surrounding area that is well-suited for the ecosystem of the entire bay—human and otherwise—and follows regulatory frameworks. The ideal development timeline begins with modeling in 2018, feasibility studies in 2019-2020, design in 2020-2022 and construction beginning in 2023.

Reaching Out to the Community

Beginning this spring, Carol MacLennan, a Michigan Tech research professor, will work with community members in Gay, the Keweenaw Historical Society and the tribal community to bring an interpretive exhibit at the former Gay school about the legacy of copper mining and milling in Grand Traverse Bay and at Sandpoint near Baraga.

“We’ll be looking at the bigger picture of how the sands are produced from milling, how the sands are moving, the environmental consequences, and the efforts to control the sands, remediate and restore the places that have been inundated by them.”

MacLennan says that she and community members will explore multiple ways to use historical and scientific interpretation to engage the public, potentially including museum exhibits, a driving tour, oral histories and signage about the history of the area, but also about the science behind cleaning up the stamp sands.

“It’s very complicated, but there needs to be a way to communicate it to the public,” MacLennan says. “The ways the sands move is an important part of the story. What’s toxic, what’s not? What do we have to worry about? We will put together the whole package in a story, not just pieces of it.”