For the third year in a row, a cold-weather endeavor built on engineering know-how, perseverance and faith will house a special ice mass on the Michigan Technological University campus.

A shovelful of snow hits Father Ben Hasse, pastor at St. Albert the Great University Parish in Houghton, squarely in the chest.

“It’s not every day you get to throw snow at a priest,” jokes one of about 20 students filling the three-by-four-by-six-foot wood forms used to construct the walls of what will be a cathedral fashioned from snow and ice.

Hasse asked for it. He's in the direct line of fire, standing inside one of the forms to pack down the snow on the first level of the north wall for the Ice Chapel of Our Lady of the Snows. All the while he's vigorously stomping, fielding questions about details like designing the structure around the mature trees on the property behind the church, where for the third year in a row ice mass will be celebrated.

Three masses, open to the public, will take place during Michigan Tech Winter Carnival's final weekend to accommodate everyone who wants to experience the event.

Corners were staked January 15. Construction began January 17. Walls were mostly complete by February 3. The walls go up faster, compared to the Carnival statues constructed around campus and community, because chapel builders pack the snow without the watering used in snow statue construction. The technique came naturally to Hasse.

"I built a lot of snow shelters in Boy Scouts."Father Ben Hasse

Why Build a Snow Chapel?

It started with winter carnival competition. St. Al's is active in all the contests, from broomball to queen's competition. "My first winter here, we just had fun building a statue," says Hasse, who arrived in 2013. "The second winter, we did a scale model of St. Peter's." That statue, "There's Snow Place Like Rome," complete with colonnades, got students excited about what they could accomplish—how intricate could they be? What else could they build? In the meantime, someone sent Hasse stories about ice churches in Eastern Europe, and churches enclosed in glaciers. The idea snowballed from there.

"We had kind of a vague intention, 'we should do that!' and in January '16 we just built it for fun," says Hasse. He envisioned a modest structure, with "little snow benches." Then he began to hear from students, first those who wanted to participate, and then later told him that their parents were coming early to Winter Carnival to attend ice mass. In residence halls, students working on the project were asked if they were Catholic, if they were going to ice mass and could they bring guests. The snow bench idea was abandoned as builders realized standing-room-only was the only way to create enough space for everyone who wanted to attend. Other lessons learned: Snow chapels can be slippery; covering the floor with sawdust helps.

There was room for 140 in the 18-by-30-foot chapel the first year, with others peering over the eight-foot-tall walls. Other media outlets picked up the story of the ice mass, carried by Catholic News Agency. The St. Al's Facebook page received 180,000 hits—an impressive number considering there are about 70,000 Catholics in the Upper Peninsula, notes Hasse.

The 2017 chapel, 30-by-50 feet, accommodated 280. Students cut and hauled a 500-pound block of ice from the Portage Canal on the Keweenaw Waterway to fashion an altar. This year's altar is still in the works. And there's a new addition: a bell tower.

News of the endeavor continues to spread through media outlets and social media, much of it thanks to photos by Zach Smith, a second-year computer engineering student who's been active in the parish since his Orientation Week.

This year's chapel is 35-by-60 feet. There are no plans to make it larger in the future. "We want that feeling of being inside," says Hasse. "It's easy for us to have more masses."

Experience Building with Snow Pays Off

There's a reason St. Al's is often a contender in the All-Nighter competition—the group has won in its category three years in a row.

"By the time we get to all-nighter, we're already a fine-tuned machine," says Hasse.

Michigan Tech, not affiliated with any religion, is a gathering place for numerous organizations that foster inclusiveness, community, service to others and fun. Named for the patron saint of natural scientists, St. Albert the Great University Parish was founded in 1963 to serve Michigan Tech students, staff, faculty and friends and is one of many campus ministries here. 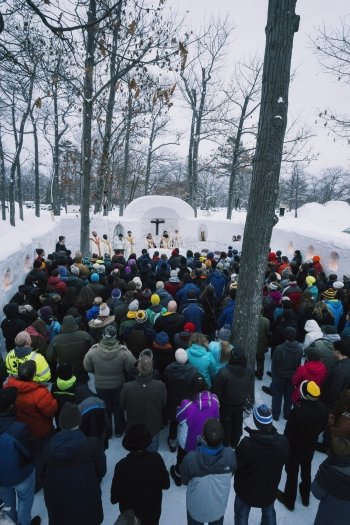 The St. Al’s community welcomes everyone to ice mass. Be sure to dress warmly. As Father Ben Hasse notes, it was so cold last year his fingers were freezing to the chalice. There are three masses:

There is parking next to the church and at the Student Development Complex, just up the hill off MacInnes Drive. Many choose to walk from there, or from main campus.

Check out the St. Albert the Great Catholic Campus Ministry at MTU Facebook Page for updates.