“What’s important is that this is not just one study—it’s the consensus of multiple studies,” Green says. This consistency across studies contrasts with the language used by climate change doubters. This perspective stems from, as the authors write, “conflating the opinions of non-experts with experts and assuming that lack of affirmation equals dissent.”

Environmental Research Letters published the paper this week. In it, the team lays out what they call “consensus on consensus” and draws from seven independent consensus studies by the co-authors. This includes a study from 2013, in which the researchers surveyed more than 11,000 abstracts and found most scientists agree that humans are causing climate change. Through this new collaboration, multiple consensus researchers—and their data gathered from different approaches—lead to essentially the same conclusion.

The key factor comes down to expertise: The more expertise in climate science the scientists have, the more they agree on human-caused climate change.

There are many surveys about climate change consensus. The problem with some surveys, Green points out, is that they are biased towards populations with predetermined points of view. Additionally, respondents to some surveys lack scientific expertise in climate science.

“The public has a very skewed view of how much disagreement there is in the scientific community,” she says. Only 12 percent of the US public are aware there is such strong scientific agreement in this area, and those who reject mainstream climate science continue to claim that there is a lack of scientific consensus. People who think scientists are still debating climate change do not see the problem as urgent and are unlikely to support solutions.

This new paper is a rebuttal to a comment criticizing the 2013 paper. Green is quick to point out that skepticism, a drive to dig deeper and seeking to better validate data, is a crucial part of the scientific process.

“But climate change denial is not about scientific skepticism,” she says.

Refuting climate change doubters is the main purpose of a website Green contributes to called skepticalscience.com. The website is run by the new study’s lead author, John Cook from the University of Queensland in Australia. He says consensus studies have helped change political dialogue around climate change.

“The progress made at the United Nations Climate Change Conference (COP21) in Paris late last year indicates that countries are now well and truly behind the scientific consensus, too,” Cook says.

Co-author Naomi Oreskes from Harvard University originally pursued consensus data about climate change in 2004 and co-wrote Merchants of Doubt, which was turned into a documentary in 2014. She says that this latest work places the findings in the broader context of other research.

“By compiling and analyzing all of this research—essentially a meta-study of meta-studies—we've established a consistent picture with high levels of scientific agreement among climate experts,” she says.

And among climate scientists, there’s little doubt. There is consensus on consensus. 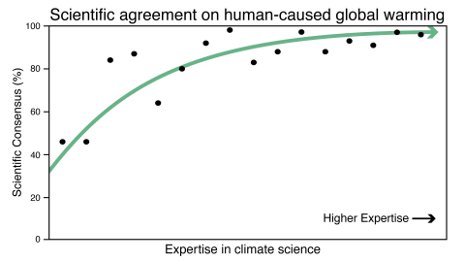