Environmental history professor Nancy Langston visited far northern Sweden to study the impact of a proposed open-pit mine on the indigenous Sámi people.

Last year, when Michigan Tech professor Nancy Langston arrived in the mining city of Kiruna in far northern Sweden, it was just after Christmas—high season for tourists hoping to catch a glimpse of Santa Claus among the frozen reindeer pastures. The arctic sun sat just below the horizon for several hours each day, suffusing the snowy boreal forests with an otherworldly light. "It was the coldest I've ever been, but the most beautiful light and forest I'd ever seen," Langston says.

A visitor could be forgiven for assuming that the icy landscape beyond the city would be uninhabited. Indeed, this is how the Swedish tourism industry sells the region—as a pristine, empty landscape beyond the reach of humans. The truth, Langston found, is quite the opposite. The indigenous Sámi people have been living among and herding reindeer in the region for ten thousand years, at times suffering brutal repression from governments based in southern Scandinavia. "The kinds of ideas that they're now selling, of 'Come see this empty world,' denies these humans," Langston says.

This willful ignorance of Sámi land-use traditions becomes particularly convenient whenever new mineral deposits are discovered in Sámi territory. Indeed, Langston, an environmental historian, had been invited to the area to study the effects of an open-pit mine on the Sámi's traditional pastoral way of life. Sámi leaders and others were concerned that the iron mine, planned by the British firm Beowulf Mining, could make reindeer herding impossible.

Langston came to Umeå University in northern Sweden as the 2012–13 King Carl XVI Gustaf Professor of Environmental Science. Each year, universities around Sweden nominate foreign academics they'd like to host for a year, and the King of Sweden, along with his Royal Academy, chooses one lucky honoree. Langston had no idea that the award was coming. "I got an email from the king's secretary, and I kind of thought it was one of those Nigerian scams," Langston says. "I thought, 'Oh yeah, the King of Sweden, gimme a break.' Then my colleague at Umeå called me and said, 'Guess what?'"

Langston had been nominated because of her recent work on similar environmental history questions in Wisconsin, where the Bad River Reservation has been fighting a proposed iron mine on the grounds that it threatens to pollute their wetlands. These renowned wetlands encompass the largest wild rice beds in the world, an important traditional food source of the Ojibwe Indians. In the past, similar mines have led to problems in local watersheds, including the famous Reserve Mining case in the 1970s, when the water supply of Duluth was contaminated. "There are real similarities between that and what's happening now," Langston says. In an effort to lower legal barriers to the project, Wisconsin has relaxed environmental regulations on new iron mines.

In Kiruna, Langston found a scenario not so different from the controversy she'd been studying in Wisconsin. Even the landscape of northern Sweden reminded her of the shores of Lake Superior. As in Wisconsin, locals around Kiruna faced the prospect of new open-pit mines with low ore content and, they feared, a high risk of pollution. Most locals were not opposed to mining in principle—in fact, some of the strongest opposition came from employees at an existing, underground, more environmentally responsible mine, who worried about their own jobs being undercut.

"The Swedish government did not seem interested in engaging the local communities," Langston says. "It wasn't just the Sámi, it was everyone in the community. They all wanted to be involved in the process."

At Umeå, Langston made a study of the environmental history of the region. The study culminated in an article for American Scientist that laid out the environmental concerns of the Sámi in light of complex, longstanding pastoral land-use traditions. Reindeer herding, she discovered, actually involves eight seasons of migration to higher or lower pasture, depending on temperatures and vegetation available. Such complex usufruct traditions are impossible without some type of communal land rights.

The relationship between Sámi and southern Swedes is, Langston says, similar to that between American Indian nations and Americans as a whole—except that American Indians have much better-established rights to their lands than Sámi do. Though the Swedish government has officially recognized the Sámi right to herd reindeer on traditional land, in practice Sámi have won few important legal battles.

"The Swedish government has always ruled in favor of timber management, highways, and hydro-management," Langston says. "They've always said, ‘You can just move your reindeer.' Sámi feel that they don't have legal recourse, that they're not taken seriously as collaborators."

Langston began her academic career as an ecologist, but changed course when, during her PhD work on birds in Zimbabwe, she found herself in the middle of a humanitarian refugee crisis. At her research site, a national park with a rhino-poaching problem, guards had been instructed to shoot black African intruders on sight as assumed poachers. This outraged Langston, who sympathized with the real social and political pressures on refugees to take cover in the park. "I realized that conservation had to be more than putting up walls around sites," she says. Since then, her research has often focused on the role of indigenous groups in environmental planning and protection.

Langston is still unsure how the controversy over the open-pit mines near Kiruna will turn out. This summer, a group of activists blockaded an important road, holding up testing of a proposed mine and fighting for hearts and minds in a national and global public opinion battle. Perhaps Langston's American Scientist article will have some impact on the conversation, making it more accessible to informed outsiders.

Langston herself doesn't pick sides in this or any particular environmental controversy. She does, however, encourage the Swedish government to hear out Sámi concerns. "My position is the more democratic and open the conversation, the more sustainable it'll be over the long run," she says. 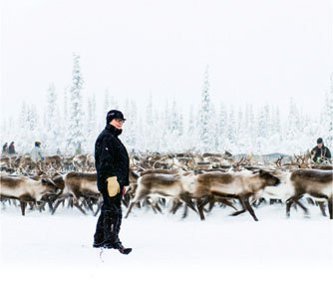 A Sámi herder in a winter reindeer corral near Jokkmokk, Sweden. 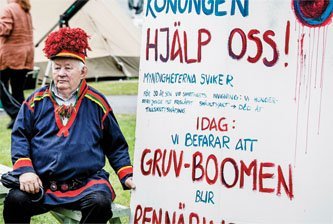 A Sámi man displays a placard appealing to the Swedish king to help in the battle against mining on Sámi land. While these indigenous people have the right to roam vast territories in northern Scandinavia, they do not own the land and have little or no control over its development. 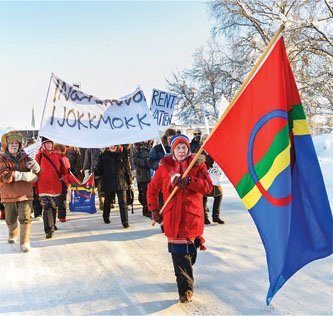 Sámi people protest plans to build an open-pit iron mine that would disrupt their reindeer's grazing and migration.