From Cancer Treatment to Ion Thruster

Nanosatellites are cellphone-sized spacecraft that can perform simple, yet valuable, space missions. Dozens of these little vehicles are now tirelessly orbiting the earth performing valuable functions for NASA, the Department of Defense, and even private companies.

Nanosatellites borrow many of their components from terrestrial gadgets: miniaturized cameras, wireless radios, and GPS receivers that have been perfected for hand-held devices are also perfect for spacecraft. However, says L. Brad King, nanosats require something you will probably never be able to download from an app store: “Even the best smartphones don’t have miniaturized rocket engines, so we need to develop them from scratch.”

Miniature rockets aren’t needed to launch a nanosatellite from Earth. The small vehicles can hitchhike with a regular rocket that is going that way anyway. But because they are hitchhikers, these nanosats don’t always get dropped off in their preferred location. Once in space, a nanosatellite often needs some type of propulsion to move it from its drop-off point into its desired orbit. Enter micro rocket engines.

For the last few years, researchers around the world have been trying to build such rockets using microscopic hollow needles to electrically spray thin jets of fluid, which push the spacecraft in the opposite direction. The fluid propellant is a special chemical known as an ionic liquid. A single thruster needle is finer than a human hair, less than one millimeter long, and produces a thrust force equivalent to the weight of a few grains of sand. A few hundred of these needles fit in a postage-stamp-size package and produce enough thrust to maneuver a nanosatellite.

These new electrospray thrusters face some design challenges, however. “Because they are so small and intricate, they are expensive to make, and the needles are fragile,” says King, the Ron and Elaine Starr Professor of Mechanical Engineering–Engineering Mechanics. “They are easily destroyed either by a careless bump or an electrical arc when they’re running.”

To get around the problem, King and his team have developed an elegant strategy: eliminate the expensive and tedious microfabrication required to make the needles by letting Mother Nature take care of the assembly. “We’re working with a unique type of liquid called a ferrofluid that naturally forms a stationary pattern of sharp tips in the liquid surface,” he says. “Each tip in this self-assembling structure can spray a jet of fluid just like a micro-needle, so we don’t actually have to make any needles.”

Ferrofluids have been around since the 1960s. They are made of tiny magnetic particles suspended in a solvent that moves when magnetic force is applied. King illustrates with a tiny container holding a ferrofluid made of kerosene and iron dust. The fluid lies flat until he puts a magnet beneath it. Then suddenly, the liquid forms a regular series of peaks reminiscent of a mountain range or Bart Simpson’s haircut.  These peaks remain perfectly stable despite vigorous shaking and even turning the container upside down. It is, nonetheless, completely liquid, as a finger-tip touch proves undeniably. When the magnet is removed, the liquid relaxes to a perfectly flat surface.

King’s team was trying to make an ionic liquid that behaved like a ferrofluid when they learned about a research team at the University of Sydney that had already done it. The Sydney team was using magnetic nanoparticles made by the life-sciences company Sirtex, which are used to treat liver cancer. “They sent us a sample, and we’ve used it to develop a thruster,” King said. “Now we have a nice collaboration going. It’s amazing that the same technology used to treat cancer can also function as a micro rocket for spacecraft.”

King’s first thruster is made of a one-inch block of aluminum containing a small ring of the special fluid. When a magnet is placed beneath the block, the liquid forms a tiny, five-tipped crown. When an electric force is then applied to the ferrofluid crown, liquid jets emerge from each point, producing thrust.  “It’s fascinating to watch,” King says. “The peaks get taller and skinnier, and taller and skinnier, and at some point the rounded tips instantly pop into nano-sharp points and start emitting ions.”

The thruster appears to be almost immune to permanent damage. The tips automatically heal themselves and re-grow if they are somehow damaged. King’s team has already demonstrated its self-healing properties, albeit inadvertently. “We accidentally turned the voltage up too high, and the tips exploded in a small arc,” King says. While this would spell death for a typical thruster, “A completely new crown immediately formed from the remaining ferrofluid and once again resumed thrusting.”

Their thruster isn’t ready to push a satellite around in orbit just yet. “First we have to really understand what is happening on a microscopic level, and then develop a larger prototype based on what we learn,” King said. “We’re not quite there yet; we can’t build a person out of liquid, like the notorious villain from the Terminator movies. But we’re pretty sure we can build a rocket engine.” 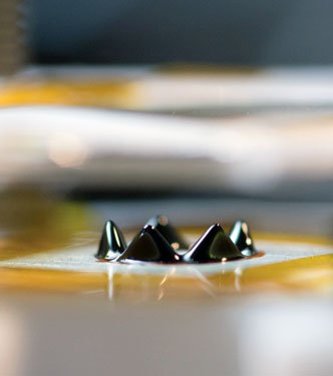 They don't look like rocket engines, but if you apply electrical force to the tiny spikes of ferrofluid, shown above, jets of ions stream outward. That could generate enough thrust to maneuver a nanosatellite in space, says scientist L. Brad King. 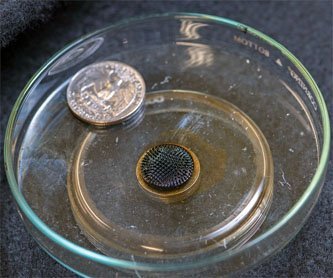 A few hundred of these ferrofluid needles can produce enough thrust to maneuver a nanosatellite. 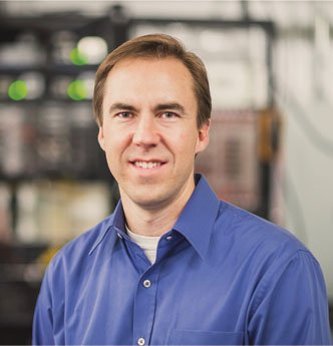