Science From the Bottom of the Food Chain

Professor W. Charles Kerfoot's insatiable curiosity and enthusiasm for discovery have propelled him into all corners of his discipline and well beyond the confines of Michigan Tech. For both the breadth and depth of his contributions to limnology, he received the University's 2013 Research Award.

Kerfoot is a member of the biological sciences faculty and an adjunct professor of geology. He is also director of the Lake Superior Ecosystem Research Center. "I don't think you could have picked a more deserving candidate for the award," said Norman Yan of York University. "Charlie is considered an international star in the field of freshwater zooplankton ecology."

Winfried Lampert of the Max Planck Institute for Evolutionary Biology cited the 1978 Symposium on Evolution and Ecology of Zooplankton Communities, which Kerfoot organized, as "a turning point in freshwater ecology." A few years later, his theory that zooplankton move up and down the water column to escape predators settled a long dispute and is now "textbook stuff," Lampert said.

Furthermore, Kerfoot was the first researcher to recognize the potential in hatching eggs of zooplankton that had been dormant for decades in sediment layers. "He coined the term ‘resurrection ecology,' and no other concept has been used so extensively in plankton ecology and evolution during the first decade of the present century," Lampert said.

Mary Power of the University of California, Berkeley, praised Kerfoot for his interdisciplinary research. She noted that he integrated limnology and the natural history and ecology of plankton in his research documenting the disappearance of the "doughnut" in southern Lake Michigan. He also predicted that, as quagga mussels consume the gyre of plankton, zooplankton and fish species would be threatened.

"Since coming here, I've done much more than I could have elsewhere," he said. In particular, Michigan Tech's location has been an asset. He participated in two of the largest freshwater grants ever awarded, the KITES (Keweenaw Interdisciplinary Transport Experiment in Superior) and EEGLE (Episodic Events–Great Lakes Experiment), which totaled more than $20 million.

York University's Norman Yan thinks Michigan Tech was wise to honor a plankton expert. "Quite simply, we would be hungry, dim-witted, and likely dead without the services that plankton provide," he said. "We need plankton for our survival, and we need researchers like Charlie to ensure that we understand and manage the threats to the health, diversity, and functioning of plankton communities." 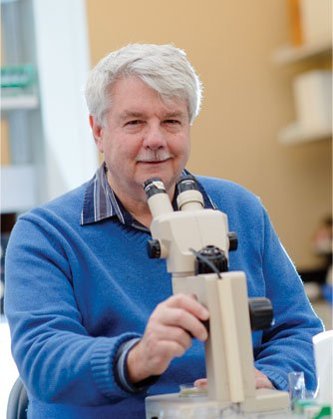