The Friendly Drones of Michigan Tech

Up in the sky! Is it a bird? A plane? Neither. It’s a peaceful drone on the frontline of the battle to fix America’s infrastructure, from roads and bridges to underwater pipelines.

Everyone knows what drones are, right? Drones are unmanned flying machines, and they’ve gained visibility—and notoriety—in military and spying operations. But they have a wide variety of friendlier and beneficial applications here at home.

Researchers at Michigan Tech are working with three different kinds of unmanned vehicles—aka drones—and not all of them fly through the air.

The Michigan Tech Research Institute (MTRI) is looking into the use of drones in transportation. MTRI scientists and faculty from the main Michigan Tech campus are using unmanned aerial vehicles (UAVs) to help the US Department of Transportation’s Research and Innovation Technology Administration (USDOT/RITA) and other agencies develop low-cost, highly-efficient ways to handle tasks that range from mapping the condition of unpaved roads to understanding traffic jams and evaluating the conditions inside culverts. The research will help transportation agencies save money and reduce risk to staff who would otherwise have to go on a roadway or bridge, or inside a confined space, to understand infrastructure conditions there.

Meanwhile, a graduate student in the School of Technology is developing a fixed-wing, autonomous aerial vehicle to take high-resolution digital images from heights of three hundred feet. And the Great Lakes Research Center is saving time, money, and lives by checking underwater pipelines, cables, and municipal water intakes with Iver 3, the latest generation of autonomous underwater vehicle.

A different kind of opponent: potholes, ruts and bridges

Now about those “drones” at MTRI down in Ann Arbor, where they call them unmanned aerial vehicles, the preferred moniker of the UAV industry. They look like miniature helicopters. MTRI is currently using two UAVs: a Bergen hexacopter and a DJI Phantom quadcopter. The hexacopter, the larger of the two, has six blades and a four-foot rotor span. It costs $5,000 as configured for research, weighs just over eleven pounds, and can fly a digital camera like a Nikon D800. The smaller UAV has four blades that spin in a two-foot diameter. It weighs only two pounds, costs just $700, and can fly smaller cameras like the Go Pro—a favorite among action sports users.

Both UAVs take full-sized, high-definition digital images, with the higher resolution ones capable of better than one-centimeter 3D resolution. “They can show us how many potholes are in a road and how deep they are, the degree of crown [curve] in a roadway, identify rutting conditions in a roadway, washboarding, and drainage, and evaluate density and severity of road and bridge problems,” says Brooks. Up to now, agencies responsible for roads have been reactive, checking out problems after someone calls to complain, he explains. “This technology turns reactive responses to proactive responses through improved asset management practices.”

The UAVs’ flight is controlled by a “pilot” on the ground, reminiscent of remote-control model airplanes, but if they have to, the vehicles can find their own way home. They fly about one hundred feet above the ground, well below the Federal Aviation Administration’s permitted ceiling of four hundred feet. Both have cameras, GPS, and on-board stability systems.

And MTRI is experimenting with another, even smaller quadcopter, the open source Crazyflie, for inspecting confined spaces to see if it’s safe to send a person inside. It weighs two-thirds of an ounce and costs $179.  “Its controller is bigger than the vehicle,” Brooks remarks.

Based at the Great Lakes Resource Center on the Michigan Tech campus waterfront, the underwater autonomous vehicle (UAV) Iver 3 has been out on two test runs—one in the Keweenaw Waterway and one in the Straits of Mackinac—and it performed like a superhero, said Guy Meadows, director of Great Lakes research at the GLRC.

Iver has two dual processor computers on board, Wifi, GPS, water flow and speed-of -sound sensors, and the latest in sonar technology. It can dive 330 feet and cover 30 miles of water on missions up to 12 hours. Iver returned to the factory this winter to be fitted with a high-definition camera, lights, and a satellite phone.

Iver is an impressive research tool. Meadows explained: “You end up with a survey-quality map of the bottom over the selected swath. The map size depends on the altitude of the robot above the lake floor, but at ten meters above the bottom, you can map an entire football field.”

Meadows hopes to use Iver to gain an understanding of the currents flowing through the Straits of Mackinac. “Our new super computer at the GLRC lets us numerically predict the flow through the Straits, but we need a tool to validate this information. That’s where Iver comes in,” he explained. Using its sensors, Iver should be able to give researchers an accurate understanding of the movement of currents in this area as well as the bottom sediments.

Iver’s uses are not just limited to behavior of currents. Nina Mahmoudian, assistant professor of mechanical engineering–engineering mechanics and an expert on autonomous control of robots, is working with GLRC researchers to develop algorithms that will allow Iver to track long underwater features. “Those could be pipelines crossing the Great Lakes, or they could be underwater communication cables,” Meadows explained. “If we decided to develop offshore wind-power systems in the Great Lakes, it could follow those power cables. Most importantly, it could check municipal water intakes.”

Meanwhile, in the School of Technology, Loakeim Tellidis, a master’s student from Greece, is working on a fixed-wing unmanned aerial vehicle.

Tellidis’s UAV cost less than $2,000 to build. It takes pictures with two-inch resolution from 300 feet up and has a 50-minute flight time. And, says Tellidis, it is more stable than the copter-like UAVs and can cover more distance.

“We can use it almost everywhere,” said Tellidis’s advisor, Associate Professor Eugene Levin. “Transportation—you can estimate how bad is a road and you can act before the problem causes an accident. Agriculture, floods, fires, you just name it. " 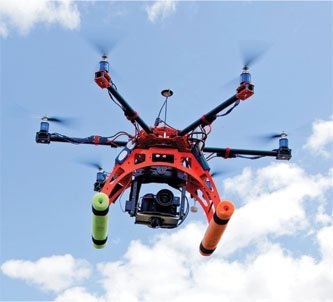 UAVs like this one at the MichiganTech Research Institute may soon be cruising America's highways and bridges and reporting back on their condition. 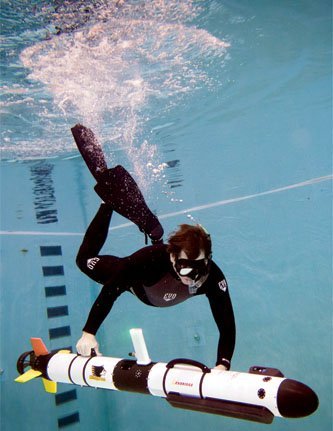 Researcher Colin Tyrrell chaperones Michigan Tech's AUV in the University diving pool. The vehicle has also navigated wilder waters, including the Straits of Mackinac, where it scanned a pipeline.