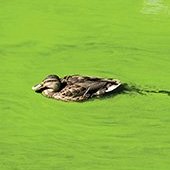 Scientists from the Michigan Tech Research Institute (MTRI), in Ann Arbor, are using satellite data to find harmful algal blooms (HABs) in the Great Lakes and determine what threats they may pose to water quality and public health.

There’s algae in all the Great Lakes, but in some areas, agricultural runoff can cause a massive overgrowth, enough to clog water intake pipes, degrade drinking water, and potentially sicken people and animals. Climate change is another driver; algae tend to thrive in warmer water, and the Great Lakes’ temperature is on the rise.

The project generates HAB maps of portions of Lake Erie, Lake Huron, and Lake Michigan. The maps are posted at www.mtrihabsmapping.org. The data will be useful to fishermen, sailors, tourists, and public water system managers, not to mention the public, said Robert Shuchman, a lead scientist on the project. “You don’t want your grandkids going to the beach and jumping into pea soup,” he said. 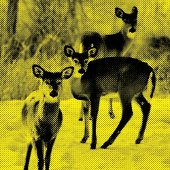 The science of yellow snow

White-tailed deer may be making the soil in their preferred winter homes unfit to grow the very trees that protect them there.

PhD candidate Bryan Murray and two faculty members in the School of Forest Resources and Environmental Science, Professor Christopher Webster and Assistant Professor Joseph Bump, studied the effects on soil of the nitrogen-rich waste that white-tailed deer leave among stands of eastern hemlock, which are their favorite wintering grounds in Northern Michigan.

They compared eastern hemlock stands where deer congregated to stands where deer were fenced out and found a strong relationship between the amount of soil nitrogen from the deer’s urine and feces and the kinds of plants that flourish there. In particular, all that nitrogen may hasten the transition of hemlock to hardwood species that provide scant winter cover.

Long ago, before logging enabled the white-tailed deer to move north and before the deer population exploded, the ecosystem stayed balanced. Now more deer are crowding into less winter cover, shifting the equilibrium. 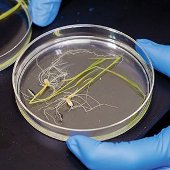 Juice from rice cells knocked out two kinds of human cancer cells as well or better than the potent anti-cancer drug Taxol in lab tests conducted by Michigan Tech biologists Ramakrishna Wusirika and Aparna Deshpande. Plus, it did something extra: it played nice with normal cells.

Wusirika thinks the rice callus culture may be attacking cancer with the same sort of plant chemicals that make vegetables so healthy to eat. 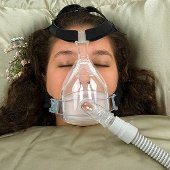 Getting treatment for a common sleep problem may do more than help you sleep better. It may help you look better too, according to new research from Michigan Tech and the University of Michigan Health System.

The findings aren’t just about looking sleepy after a late night. Researchers found that patients’ facial appearance improved after they received CPAP treatment for sleep apnea, a condition marked by snoring and breathing interruptions that afflicts millions of adults—most undiagnosed.

Sleep neurologist Dr. Ronald Chervin, director of the University of Michigan Sleep Disorders Center, led the study. His longtime collaborator, Joseph Burns, a signal analysis expert and engineer at the Michigan Tech Research Institute in Ann Arbor, developed a way to precisely map the colors of patients’ facial skin before and after CPAP treatment. Objective measures showed that patients’ foreheads were less puffy, and their faces were less red after CPAP treatment.

Twenty-two independent raters looked at photos of each patient without knowing which were the “before” pictures and which the “after” pictures. About two-thirds of the time, the raters thought the patients in the posttreatment photos looked more alert, more youthful, and more attractive. 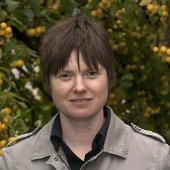 Super-high-energy galactic gamma rays have trillions of times more energy than visible light, and they disappear in the atmosphere before they hit the Earth’s surface. To learn about them, scientists build elaborate observatories, and one of the most advanced is the new High-Altitude Water Cherenkov (HAWC) Gamma-Ray Observatory, in Mexico. It is the only place in the world that can detect echoes of the highest-energy gamma rays, subatomic particles that leave the barest traces of light upon penetrating the observatory’s array of water tanks.

Physicist Petra Huentemeyer leads the team that designed the observatory’s laser calibration system. Calibration at the HAWC Observatory is critical, because the science depends on measurements that must be accurate to within tenths of billionths of a second. Those measurements, which reveal air showers generated by the gamma rays, not only detect the presence of gamma rays, they reveal where the rays come from.

Scientists are interested in the highest-energy gamma rays because they hold clues to the nature of space and time. The HAWC collaboration involves approximately 150 scientists from the Los Alamos National Laboratory’s Neutron Science and Technology and Subatomic Physics groups, 15 universities in the United States, and 15 in Mexico. 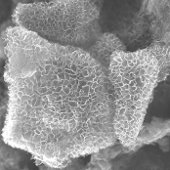 Dye-sensitized solar cells are thin, flexible, easy to make, and very good at turning sunshine into electricity. However, they require one of the most expensive metals on the planet: platinum. While only small amounts are needed, the cost of the silvery metal is still significant.

Yun Hang Hu, Michigan Tech’s Charles and Carroll McArthur Professor of Materials Science and Engineering, has developed a new, inexpensive material that could replace the platinum in solar cells without degrading their efficiency: 3D graphene.

Regular graphene is a famously two-dimensional form of carbon just a molecule thick. Hu and his team synthesized a unique 3D version with a honeycomb-like structure.

The cell with the 3D graphene counter electrode converted 7.8 percent of the sun’s energy into electricity, nearly as much as the conventional solar cell using costly platinum (8 percent).

Synthesizing the 3D honeycomb graphene is neither expensive nor difficult, said Hu, and making it into a counter electrode posed no special challenges.

For scientists, it was love at first gigabyte

Michigan Tech now has one of the most powerful supercomputers in the region. Dubbed Superior, this multi-teraflop thoroughbred located in the Great Lakes Research Center can undertake calculations that were previously the stuff of scientists’ dreams.

Approximately twenty faculty members from eleven departments and institutes are already using Superior, which went online in June. Superior’s power enables heavyweight projects, such as the hydrogeological modeling of all the Great Lakes being undertaken by Pengfei Xue, a newly arrived assistant professor of civil and environmental engineering. “I’m glad I’m in the right place at the right time,” Xue says.