It’s not just a new way to make cellphone cases. 3D printing could change everything.

Most people view the 3D printer as an interesting novelty. Joshua Pearce sees it as the prelude to revolution.

It’s not because making your own plastic soup ladle is an incendiary act, or even because some people might print arsenals of Uzis and take to the barricades (that hasn’t happened yet). It’s because 3D printers put the means of production into the hands of the masses.

If this sounds like the rhetoric of class struggle, it isn’t—not yet, anyway. Open-source 3D printing is a logical extension of the Internet Revolution, which liberated data that had once been tucked away in libraries, recipe boxes, and classified government files. Conceivably, 3D printing will move the Information Age a step ahead, by giving everyone access to free design files and inexpensive equipment to make most anything.

Pearce had his eureka 3D printing moment a couple years ago, when he needed a lab jack. He was shocked to see a quote for one that cost a thousand dollars. “All it does is move things up and down,” he says with unveiled exasperation. Using a simple 3D printer and open-source software, his team fought back and made a utilitarian replica for about five dollars.

Then they posted the code to make the lab jack on Thingiverse.com, a free web repository where people submit open-source digital designs for all kinds of objects and receive feedback. Anyone can submit a design, and anyone can download it, all for free.

“Immediately someone I’d never met said, ‘This isn’t going to work quite right, you need to do this,’” Pearce said. “We made a simple change, and now I have a lab jack that’s superior to our original design.” It has since been downloaded thousands of times.

The typical 3D printer makes things by laying down sub-millimeter-thin layers of plastic one after another in a specific pattern. The inexpensive printers that are popping up everywhere are controlled by a tiny computer, typically an Arduino microcontroller, which itself is open source. Since information about its hardware and software is freely available, it can be programmed to make practically anything.

The microwave-sized RepRap (short for “self-replicating rapid prototyper”) 3D printers start at under $500 and, with proper direction, can print out parts for themselves. Once you have one RepRap, you can make an entire flock. Pearce’s lab has more than a dozen.

As Pearce started printing his own stuff, he began to apply his scientist’s mind to the whole concept of 3D printing. In a September 13, 2012, article in the journal Science, he lauded printers’ ability to make lab equipment, thus slashing the cost of doing research.  Since then, he has published an entire library of printable optics components that cost about 97 percent less to make than to buy. Plus, the designs are customizable. “You get exactly what you need for your experiments, even if it’s not commercially available,” he says. Following this method, Pearce’s lab has saved tens of thousands of dollars.

In November 2013, the academic publisher Elsevier released his book Open-Source Lab: How to Build Your Own Hardware and Reduce Research Costs. Pearce wanted his book to be open source (i.e., free) too, and Elsevier compromised by releasing two chapters online, with a promise to make more content available in the future.

The typical homeowner can also reap huge savings, he says. After conducting an economic analysis of 3D printing in an average American home, Pearce and his team concluded that it would cost the typical consumer from $312 to $1,944 to buy twenty typical household items, compared to $18 to print them in a weekend. Under those conditions, 3D printers should pay for themselves in a few months to a few years even if you only print twenty things a year.

A 3D future, without the special glasses

Pearce believes 3D printers are igniting a second Industrial Revolution, one that decentralizes manufacturing and lets small businesses and individuals quickly and easily fabricate their own goods.

“It will be a different kind of capitalism, where you don’t need a lot of money to create wealth for yourself or even start a business,” Pearce said. “For the developing world, it will be a huge benefit,” first, by opening a Santa’s knapsack of previously unattainable goods, and second, by improving education, because lab equipment and other supplies would suddenly become cheap and readily available.

“This has the potential to eliminate scarcity,” Pearce said. “There’s no technical reason everybody couldn’t have high-end customized everything, fabricated in their own communities.”

This brave, new world can only be realized if it remains open source, Pearce cautions. Its success is driven by the free designs that are constantly improved upon by the whole 3D printing community and growing in number exponentially. He believes that inserting intellectual property legal restrictions into the mix would shackle that process.

“When innovations are open source, it speeds things up so much,” he says. “Science goes faster, technology develops faster. But the current economic order may use intellectual property as a pretext for cracking down on 3D printing, and that’s a little bit scary. Any country that does this will fall behind the rest of the world.”

“I can see a 3D printer in an auto body shop that could print out any part you’d need,” he said. “The question is, will you be allowed to do it? Or would those designs be proprietary, and essentially illegal to reproduce?”

We shouldn’t have to wait long to find out. “All this is going to come to a head in our lifetime,” Pearce predicts. “The idea that all information should be free is something that resonates with the younger generation. As a society, we need to think about how we adapt to take advantage of that rather than try to put the brakes on innovation.”

Until recently, 3D printing has been a polymer affair, with most people printing out plastic consumer goods ranging from tent stakes to chess sets. Joshua Pearce and his team have built a printer that could add hammers to that list.

Using under $1,500 worth of materials, including a small commercial MIG welder and an open-source microcontroller, Pearce’s team has built a 3D metal printer than can lay down thin layers of steel to form complex geometric objects. Commercial metal printers are available, but they cost over half a million dollars.

The detailed plans, software, and firmware are all freely available and open source, so anyone can use them to make their own.

Pearce is the first to admit that his new printer is a work in progress. So far, the products he and his team have produced are no more intricate than a sprocket. But that’s because the technology is so raw.

“Similar to the incredible churn in innovation witnessed with open-sourcing of the first RepRap plastic 3D printers, I anticipate rapid progress when the maker community gets their hands on it,” Pearce said.  “Within a month, somebody will make one that’s better than ours, I guarantee it.”

His make-it-yourself metal printer is affordable enough for home use. However, because of safety concerns, Pearce suggests that for now it would be better off in the hands of a shop, garage or skilled DIYer, since it requires more safety gear and fire protection equipment than the typical 3D plastic printer.

“It’s kept me up at night,” Pearce admits. “There are lots of good things a metal printer can do, but they can be abused like any other technology. What we shouldn’t forget is that guns, like agricultural technologies, are not inherently good or bad. Harnessing our agricultural technology has allowed us to feed 7 billion people, yet we abuse it. We allowed about fifteen thousand people to starve to death today while more than two-thirds of Americans are overweight or obese. Similarly, guns can be used by freedom fighters to overthrow dictatorships or by oligarchs to throttle democracy. And, at least in the US, they are easy to get anyway. The fact is, it would be easier for most people here to buy a gun than to print it.”

Despite the dangers, he believes that the good to come from open-source 3D printing will far outweigh the evil.

“Small and medium-sized enterprises would be able to build parts and equipment quickly and easily using downloadable, free and open-source designs, which could revolutionize the economy for the benefit of the many.”

“I really don’t know if we are mature enough to handle it,” Pearce added cautiously, “but I think that with open-source approach, we are within reach of a Star Trek-like, post-scarcity society, in which ‘replicators’ can create a vast array of objects on demand, resulting in wealth for everyone at very little cost. Pretty soon, we’ll be able to make almost anything.” 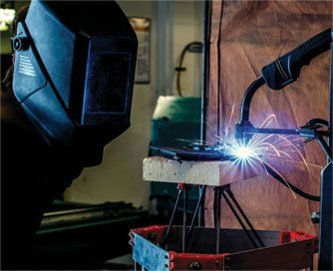 Joshua Pearce's 3D metal printer in action. While it opens the door to affordable rapid prototyping, Pearce confesses that it has led to some sleepless nights. "I really don't know if we are mature enough to handle it", he says. 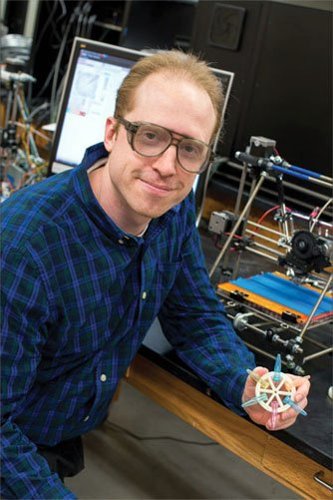 3D printing can slash the cost of doing science. Joshua Pearce printed this DremelFuge chuck, part of a mini-centrifuge, for only a few cents.