Trees to Fuel the Future—Naturally

Chandrashekhar Joshi is hunched over twin computer screens, a grin illuminating his cheery face. The professor of plant molecular genetics is asking weighty questions, questions that affect the future of people’s lives and economies all over the world. And he’s closing in on answers.

First question: how can we reduce our dependence on fossil fuels? Answer: start investing seriously in biofuels.

Next question: how are we going to turn to biofuels without depleting vital food resources like corn and sugarcane? Answer: focus on cellulosic biofuel, the kind made from the stems of woody plants like trees and residues from grasses.

But trees and other woody plants are tough customers. Their cell walls, the very things that enable them to stand upright, are also very hard to break down. That’s because they are made of complex molecular chains of sugars—sugars that must be released to brew biofuel from woody biomass—and they don’t give up those sugars easily.

So Joshi, interim chair of the Department of Biological Sciences at Michigan Tech and a professor in the School of Forest Resources and Environmental Science, set out to produce trees that would yield to the enzymes that transform biomass into biofuel. To do that, he and his research team had to manipulate the tree genes that control cellulose synthases, the proteins that assemble glucose molecules into cellulose.

Working with poplars, fast-growing trees whose entire genome is known, they cloned and characterized about fifty genes that control the composition of the poplar’s cell walls. Turning off some of these genes produced trees with cell walls that contain less lignin and hemicellulose—a carbohydrate in cell walls that provides support but also flexibility for plant stems—and more cellulose.

Some of those genetically modified plants grew faster, and their sugar production tripled, Joshi reports, making the stems much better suited to producing biofuel.

Then he and his colleagues took on another challenge. They needed to reduce the crystallinity of the cellulose, because the more crystalline the molecular structure of cellulose, the less sugar is available for making biofuel.

So the scientists started manipulating other cell wall genes. It only took one to reduce the lignin and increase the cellulose. They found it took three different genes working in concert to get less crystallinity without reducing the amount of cellulose.

“We can manipulate genes to increase the amount of cellulose and change its properties, so that it releases its sugars more efficiently,” he says.

But no one, including Joshi, wants to genetically modify millions of trees. So he’s hot on the trail of an even better solution. Now that he knows which genes affect the content and properties of a tree’s cell walls, he’s looking for those variants in natural populations.

“Once we find it in nature, we can select or breed trees or other bioenergy plants with that variation,” he says, excitement shining on his face. “We can grow as many as we need without artificial genetic manipulation.” 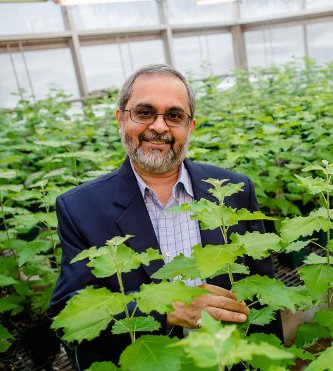