Spacetime: A Smoother Brew Than We Knew

Spacetime may be less like beer and more like cognac. Or so an intergalactic photo finish would suggest. Michigan Tech physicist Robert Nemiroff reached this heady conclusion after studying the tracings of three photons of differing wavelengths recorded by NASA’s Fermi Gamma-ray Space Telescope in May 2009.

The photons originated about 7 billion light years away from Earth in one of three pulses from a gamma-ray burst and arrived at the orbiting telescope just one millisecond apart, in a virtual tie.

This short gamma-ray burst was probably caused by the collision of two neutron stars, the densest known objects in the universe.

A neutron star is created when a massive star collapses in on itself in an explosion called a supernova. The neutron star that forms in its heart is typically about ten miles in diameter yet is heavier than the sun.

When neutron stars collide, they release energy that can be millions of times brighter than the Milky Way, but not for long. The burst that sent the three photons hurtling toward Earth lasted 2.1 seconds.

Such events generally originate billions of light years away, which is good for us, because otherwise they could wipe out most life on Earth, including the human race. They are nonetheless intriguing.

“Gamma-ray bursts can tell us some very interesting things about the universe,” Nemiroff says. In this case, those three photons recorded by the Fermi telescope may be validating Albert Einstein’s view of spacetime at the expense of quantum mechanics. In other words, spacetime may not be not as bubbly as some scientists think.

In his General Theory of Relativity, Einstein described space and time as smooth, deforming only under the weight of matter. But according to later theories of quantum gravity, which deal with matter and energy at the smallest scale, spacetime is made up of a froth of particles and possibly even black holes that pop in and out of existence over infinitesimally small moments at the so-called Planck-length scale, which is less than a trillionth of a trillionth the diameter of a hydrogen atom.

The “bubbles” in this foam—should they exist—are so small as to be almost undetectable. However, scientists have theorized that photons from gamma-ray bursts should be able to track down the bubbles’ signature.

Here’s why. The wavelengths of gamma-ray burst photons are some of the shortest distances known to science—so short they should interact with the even smaller bubbles of quantum foam. And if they interact, the photons should be dispersed—scattered—on their trek through frothy spacetime.

In particular, they should disperse in different ways if their wavelengths differ, as in the case of Nemiroff’s three photons. Imagine a ping pong ball, a bowling ball, and a softball taking alternate paths down a gravely hillside.

Furthermore, few things can delay gamma-ray photons like these, so they might travel for unimaginably long distances unimpeded. You wouldn’t notice the scattering over short distances, but across billions of light years, the quantum foam should knock the light around enough to notice. And three photons from the same gamma-ray burst should not have crashed through the Fermi telescope in a dead heat.

But they did, and that casts serious doubt on the foaminess of spacetime, at least at the most popular scale considered, the Planck length.

An earlier analysis of photons captured by the Fermi Gamma-ray Space Telescope also suggested that the universe is smooth, possibly just below the Planck scale. The margin of error, however, was large enough to cast that result into question. Bolstered by the evidence garnered from the three photons, Nemiroff’s analysis reinforces those early results and takes them further: “If foaminess exists at all, it must be at a scale far smaller than the Planck length, indicating that other physics might be involved,” he says.

“We have shown that the universe is smooth across the Planck mass,” Nemiroff adds. “That means that there’s no choppiness that’s detectable. It’s a really cool discovery. We’re very excited.”

Another win for Einstein. This may call for a toast. 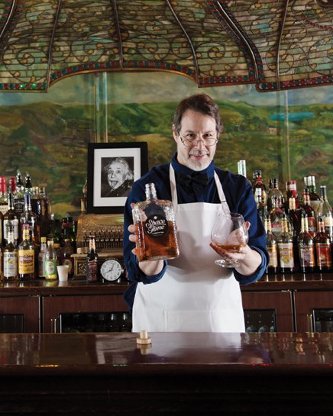 A discovery by physicist Robert Nemiroff bolsters Einstein's theory that spacetime is as smooth as any elixir from the top shelf of Shute's Bar, the landmark Calumet saloon that graciously hosted this photo shoot. 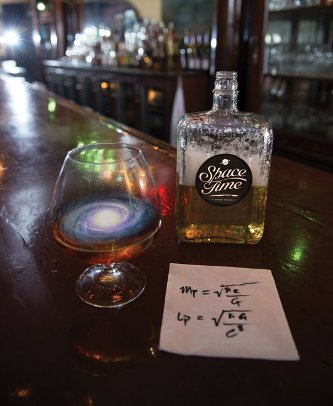 A photon photo finish leads to an intoxicating conclusion about the nature of time and space.