Road-building scientists do slow-motion engineering at the bottom of the world.

Russ Alger is biding his time. It pays to be patient in McMurdo Bay, since nothing comes easy in Antarctica. Fortunately, Alger is on his sixth visit to this scientific outpost, and he knows the ropes.

During his first trip, in 1994, he helped scout the first trail to the South Pole. Alger was younger then, and tougher: a necessity for the three months of tent camping in a white, sub-zero landscape crisscrossed with invisible crevasses that could swallow a snowmobile whole, just like that.

This time, however, Alger is not straying far from McMurdo. The director of the Institute for Snow Research is here to make another snow road better. It’s a fifteen-mile stretch from New Zealand’s Scott Base to the Pegasus runway, where supplies and people arrive in old cargo jets.

Alger will use a rarified groomer he and his colleagues developed at Michigan Tech’s Keweenaw Research Center. Called a snow paver, it has the near-magical ability to turn snow into solid roadway. All Alger needs is a little shop time to make a few improvements and repairs. But McMurdo has tons of broken vehicles, so there’s always a wait.

He’s here with friend and coworker Joel Kunnari, who manages the winter test course at the Keweenaw Research Center. Kunnari, better known as Toby, is an expert on snow roads in his own right. Plus, he knows the equipment better than anyone.

Alger and Kunnari have been trying to stay busy for three days while they wait for the repair shop to open. They get caught up on paperwork, check out some research projects, and, on a walk in weather cold enough to freeze tears, visit Discovery Hut.

The hut was used for storage during Robert Falcon Scott’s first expedition to Antarctica, from 1903 to 1907. It’s an eerie place; there’s still a dead seal outside, a pile of whale blubber, and hay for the expedition’s long-gone ponies.

Finally a spot opens up in the repair shop, and they bring the snow paver into the (heated!) building, where they install a hydraulic power pack. What with sundry Antarctic delays, it takes four days to get the paver up and running.

The next step is to hitch the paver to a tractor and haul it out to a test site. After grooming about a hundred feet, they spy red fluid spattered on the snow. Says Alger, “We had a tractor breakdown right off the bat.

Chalk up another day’s delay, which involves filling a fifty-five-gallon drum with anti-freeze-pink snow for safe disposal. Then they head out in the quasi-repaired tractor. It runs but lacks a heater core, so the temperature in the cab is about the same as the temperature outside: 15 degrees below zero Fahrenheit.

Despite near-frozen feet, they persevere. Finally, they are able to pave a new section of the road from Scott Base to the Pegasus runway.

“It’s a perfect piece of road for us: it’s new, and it really needed help,” Alger says. “They really want to be able to travel that in rubber-tired vans at about twenty-five miles an hour.”

This involves constant tweaking. They build a short road to test different processing techniques and see how the surface strength changes with time. “We hope to find out what works best,” says Alger.

How well does it work? After paving, their 38,000-pound tractor is sitting pretty on its cleats, perched on top of the road surface.

Roads are all very well and good, but Alger has another vision for the snow paver that could revolutionize transport to and from Antarctica. He’d like to build a full-size runway.

Now, air transport is via C130s with skis. “They are old, and the maintenance is expensive,” says Alger. “And the planes are small; their capacity isn’t the greatest.” Newer, wheeled planes could haul more and bigger stuff more cheaply. They might even be able to touch down at the end of the Earth.

“There’s interest in landing bigger and newer planes at the South Pole and other remote areas,” says Alger. All they need is a good runway—not much different from the road he and Kunnari have just built.

“I think we can,” Alger says. “I just have to find somebody who believes me.” 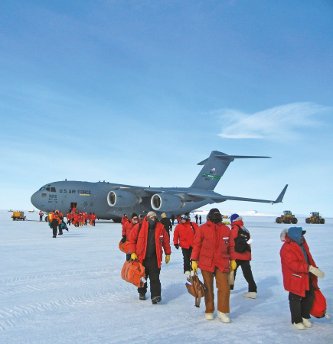 Roads are all very well and good, but Alger has another vision for the snow paver that could revolutionize transport to and from Antarctica. He'd like to build a full-size runway. 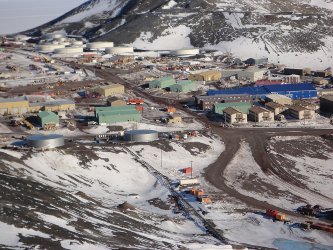 The view of McMurdo Bay from the surrounding hills. 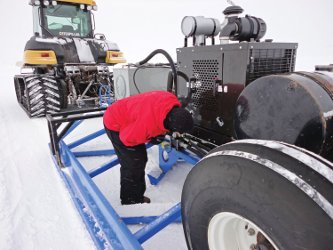 Russ Alger checking out the snow paver equipment on a test road. The paver transforms snow into pavement strong enough to hold a 20-ton tractor. 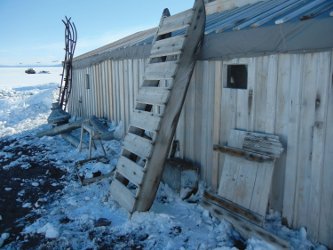 Outside Scott's Hut, on Cape Evans, built in 1911 as a base of operations for Robert Falcon Scott's ill-fated expedition to the South Pole. He and all members of his party perished on the return trip.