If our mightiest power plants could only match the simple efficiency of living cells in generating energy, the world wouldn’t be worrying about running out of oil any time soon.

Instead of being sprawled across a hundred or more acres and eating through tons of mainly irreplaceable natural resources every day, such power plants would need little more than air, water, and raw material rich in sugar and starch. Toss in a few minerals and throw the switch on an energy revolution that would change the course of civilization.

Consider that a single living cell can contain as many as 2,500 of its very own high-speed energy plants capable of astonishing feats. These microscopic factories can produce—on demand—all the energy a body needs for either running a marathon or doing math. Without these amazing units, known as mitochondria, about the only things living on Earth would be bacteria and algae. Vive la evolution!

But as wondrous as they are at producing energy, mitochondria are subject to breakdown, as are Earth’s fanciest power grids. Even though they run on oxygen supplied by normal respiration, for reasons not always clear (overexposure to UV radiation is one key suspect) mitochondria sometimes produce more oxygen-based byproducts than they need. The result can wreck mitochondrian machinery and trigger a series of nasty side effects.

Over the years, researchers have learned a lot about the link between mitochondria that suffer from what is called “oxidative stress” and a variety of health consequences, from the worst effects of aging to diseases such as cancer, Alzheimer’s, Parkinson’s, and even heart disease. This is a big reason why the over-the-grocery-counter trade in foods, potions, and pills branded as “antioxidants” is a multi-billion-dollar industry in the US alone.

If modern medicine had a safe, fast, and efficient way to check the health of a patient’s mitochondria, physicians would have a powerful new tool for catching some of the worst diseases in their earliest stages. New developments coming from the lab of two Michigan Tech chemists suddenly make the prospects of putting such power in the hands of healthcare providers an exciting possibility.

The soon-to-be-published work of Lanrong Bi, an assistant professor of chemistry, and doctoral student Nazmiye Yapici details their breakthrough development of two fluorescent dyes that show remarkable promise for detecting sick mitochondria in live mammalian cells. In repeated tests, mainly in rats and mice, these new compounds outperformed the best dye-based mitochondrial probes now on the market. The University’s Office of Innovation and Commercialization has filed for a patent on the compounds.

“Our new compounds enable us to quickly analyze the oxidative stress in mitochondria,” said Bi (pronounced “bee”). “These new dyes can easily differentiate between sick and healthy mitochondria and give us more information, and faster, than anything out there.”

For many years, biochemists have relied heavily on a special class of dyes for studying the inner workings of live cells. The best of these are based on rhodamine, a compound that readily combines with intracellular organs, or organelles, and has the added benefit of fluorescing under scrutiny by light microscopes. Such dyes can be engineered to literally light up almost anything inside a living cell, thereby pinpointing in vivid colors a select target for study.

“The secret [to our dyes] is in their molecular configuration. Their chemical structures are built to bind only with the molecules that make up mitochondria.”

The new compounds are so specifically drawn to mitochondria that they easily reveal the damage done by oxidative stress. To help mitigate such damage, mitochondria will resort to dramatically altering their shapes to stay alive. This microscopic life-and-death drama can now be seen and studied in stunning detail with the improved dyes, Bi said.

Another promising dye Bi’s team has produced targets yet another essential cell organ, the lysosome. Commonly thought of as a cell’s “stomach,” these organelles are responsible for digesting and getting rid of waste material. These vital units are subject to health problems as well. The new probe the Michigan Tech group has developed is capable of identifying sick lysosomes more efficiently than any commercial dye now available, Bi said.

In supporting their nomination for the award, James J. Russo, research scientist with Columbia University’s Genome Center, said that the novel fluorescent dyes “will have great potential for biomedical applications.”

“This project is especially exciting because of the new compounds already show a dramatic improvement over [probes] currently on the market,” he said.

Bi stressed that Yapici has been key to this research. “She is an absolutely outstanding student,” Bi said. “She works very hard; to demonstrate one fluorescent dye, she will test it under two thousand experimental conditions. And we will meet at two or three o’clock in the morning to do our work, because not many people are working on the fluorescent microscope at that time.”

Yapici was among only fifteen students from graduate schools throughout the nation selected to present her work at the May 2012 American Chemical Society Graduate Research Symposium. In addition, her presentation on detecting free radicals in living cells, given at the 2012 ACS National Meeting, was one of a select few posted online at ACS Presentations on Demand. 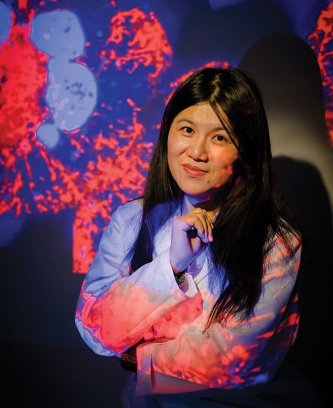 The cells are stained with a red fluorescent dye that lights up abnormal mitochondria. Developed by Lanrong Bi's research team, it can reveal damage to these energy engines, an early sign of disease. 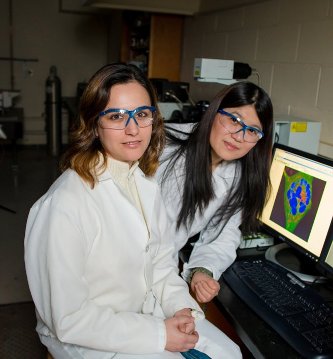