When you make breakfast, chances are you don’t think twice about whether there will be enough electrons zipping through your toaster to brown the bread. That’s because you’re probably on the grid, the beyond-big power network that stretches across the continent and draws energy from thousands of sources.

If you are off the grid, however, you can’t necessarily take toast for granted. Wayne Weaver explains why.

“On the big grid, if you plug in a fan or a refrigerator, you don’t make a dent in it,” he says. “But if your grid is much smaller, any little change in source or load can throw the system out of whack.”

If you have a load on one side, such as a coffee pot, you have to have a source, be it a solar panel or a diesel generator, on the other, making the right amount of electricity. “The problem is optimizing that balancing act,” says Weaver, an assistant professor of electrical and computer engineering. “What happens if a cloud passes over a solar panel?”

Weaver and his colleague Gordon Parker are Michigan Tech’s leading acrobats in this balancing act as it applies to microgrids.

“The word ‘microgrid’ is a little misleading,” says Parker, the John and Cathi Drake Professor of Mechanical Engineering. “They don’t have to be small. They can be a vehicle, a house, or a whole community. Their main feature is that they can be disconnected from the host power grid and can operate independently.”

Balancing a microgrid is a delicate matter. “It must be able to generate power—from renewables, diesel, anything—and it will need some level of energy storage. That’s particularly true if your sources are renewable, because those things come and go with the weather,” says Parker. “Sometimes you will need to store power, because if your sources are producing more than your loads consume, then you either have to throw away perfectly good energy or you store it for later. Keep in mind, ‘later’ could be a fraction of a second to many days. This is the essence of a very interesting control and optimization problem.”

There is more than one way to manage a microgrid. “One is to install an overarching central controller that gets data from everywhere and issues commands,” Weaver says. “That works well, but if that one controller goes down, the whole system goes down.”

Alternatively, you can use a number of lesser controllers. “The problem is that each one doesn’t know all the information, so we have to figure out how to get them to work together,” he says.

To do that, Weaver uses game theory. “It’s basically a mathematical approach to resolving conflict,” he says. “When you have scarce resources on a common network, there’s conflict. Think of it like an economic market: game theory offers us a framework to allocate resources, anything from wheat to company stock. It settles on a price, and the system keeps working.”

Within that context, Parker and Weaver are working on a platform that will let the team test different strategies for organizing and running a microgrid. “We have a very flexible control architecture that lets us bring in information from the power electronics to either a central controller or to distributed controllers at each device on the grid,” Parker says.

The team is operating through the new Mobile and Interconnected Microgrid Center and already has a couple of experimental microgrids in operation. One is Michigan Tech’s Mobile Lab, which specializes in hybrid electric vehicle technology.

And in Weaver’s lab is a microgrid no larger than a small cabinet. What makes it special is a device he made that might be called a universal voltage regulator.

Its real name is PEBB Board, short for Power Electronic Building Block. Now in its third iteration, it’s a circuit board that serves as a convertor, changing one form of electrical energy to another, albeit on a grand scale.

“It lets us connect a bunch of loads and sources of different voltages at a common point,” Weaver said. “That allows all those little power converters in the microgrid to connect to the power bus [which brings electricity into the microgrid] and to the Internet, so they can talk among themselves on how to use or store power, whatever they are trying to accomplish.”

The researchers are working with Sandia National Labs to improve hardware for microgrids and develop better models for computerized controls. “We’re also working with Sandia on a project to embed artificial intelligence into power converters, so they can talk with each other better,” Weaver says.

Until now, their work has largely been confined to the University. Their dream project would be to apply their expertise to a military base camp.

A typical base in a war zone has barracks, chow halls, and other facilities, all powered independently by diesel generators. “If they need more power at some location, what are their choices?” asks Parker. “They have to disconnect and move a generator and change the wiring. The no-brainer solution is connecting all the sources, loads, and storage into a controllable microgrid. This also lets you use different types of ad hoc power sources including solar, wind, and military vehicles with power export capability.”

This new technology could also let the military plug hybrid vehicles into the microgrid, since they can be a source of power as well as a load. That would make these unconventional vehicles more useful.

“Hybrids and electric vehicles have interesting capabilities in terms of doing silent operations, but you have to manage their state of charge,” says Parker. “If you have a fleet of vehicles, they need to be able to talk with each other and the microgrid” to assure that power is available where and when it’s needed most. “The goal is to have them work harmoniously together. You don’t want all these vehicles fighting for power, making bad decisions, and causing a blackout.”

Parker likes to think of microgrids in broader terms than electricity. “It’s really about energy flow,” he says. “When you envision it that way, it frees up your thinking. Suddenly everything is up for grabs.”

Such as? Storage, for one thing. “It isn’t just about batteries,” Parker says. “Energy can be stored mechanically, in fly wheels, or in water . . . a microgrid gives you control of the whole package.”

What’s next? They would like to build their own field-based microgrid, “something we could take out in a U-Haul and connect with ad hoc sources and loads,” Parker said.

Then they could practice that energy balancing act in earnest. 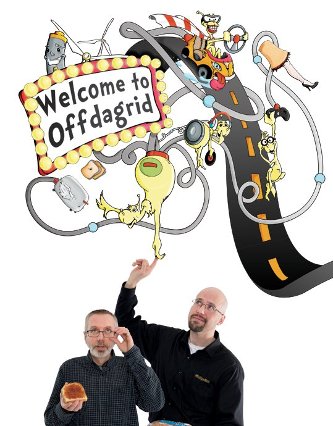