A tool to save lives after the big one

After a catastrophic earthquake, minutes count. Dan Cerminaro hopes to shave hours off the time it takes to get help where it’s needed most.

Cerminaro, a senior majoring in civil engineering, is working to identify quake damage without setting foot in the danger zone, or even on the same continent.

His tools are high-resolution aerial and satellite images of the earthquake zone, taken before and after a temblor, plus high-end image-processing software. It’s not unlike the programs that identify people’s faces on Google’s Picasa and the like, he says, “except it’s better, because people’s faces don’t change as much.”

After a bad quake, the landscape can change a great deal, and it’s not always easy to determine what happened where. To establish baseline data, Cerminaro analyzed before and after aerial and satellite images, like those available on Google Earth, of the 2010 earthquake in Haiti.

In addition to looking at structural damage, he tracked a geophysical curiosity called liquefaction.

During a quake, the water table can be squeezed upward, essentially liquefying the ground. Cars can sink into roadways, buildings can topple. A satellite image of a liquefied area looks smooth as a pond.

“We classified the Haiti quake images according to certain properties and then used those properties to classify damage after the New Zealand quake,” Cerminaro said.

He then refined the model and is working to make it even better.

“We want to make it work anywhere in the world,” he said. “After an earthquake, you could download pre- and post-quake images and apply the model.”

It would take only two or three hours to develop aerial maps that identify and describe damaged areas. “If we can get this information to relief agencies, I think we can reduce the risk for rescue teams and provide faster relief to communities,” Cerminaro said.

A native of Guatemala, Cerminaro transferred to Michigan Tech from West Shore Community College, in Scottville, because he was intent on studying engineering, and Michigan Tech was the place to do that. “But I never thought I’d be able to do anything like this,” he says of his research experience. “It has really opened my perspective. When you are just taking classes, you are enclosed. When you do research, it opens up opportunities.”

Cerminaro has attended scientific conferences and meetings hosted by NASA and the National Science Foundation, published a paper, and applied for an NSF Fellowship to attend graduate school. He has also expanded his limits, courtesy of his advisor, Thomas Oommen, an assistant professor of geological and mining engineering and sciences.

“My advisor is excellent; he has pushed me to do stuff I didn’t want to do, and I’ve come back to say thank you,” says Cerminaro. “I’ve been very blessed.” 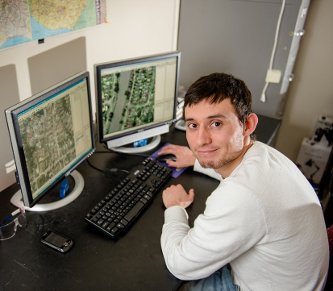