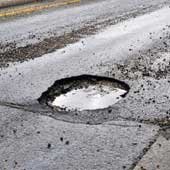 Zhanping You is paving the way for brand-new asphalt blends that fight off cracks, ruts, and potholes.

“Asphalt is now made from petroleum, so it’s very expensive,” said You, an associate professor of civil and environmental engineering. “As a result, a lot of people are looking at ways to make it more durable.”

You’s team tested two types of nanoclays, adding 2–4 percent by weight to the asphalt. That’s a smidgen—less than half of a percent of the total weight of the asphalt pavement itself. But it made a big difference.

“It improved the viscosity significantly,” You said. “That means it will provide better stiffness, which means that it won’t deform as much in hot weather or under heavy traffic.” 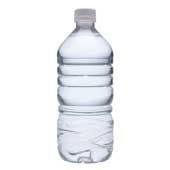 A little salt, a little sun: clean water for everyone

Nearly 80 percent of disease in developing countries is linked to bad water and sanitation. Now Michigan Tech’s Joshua Pearce has developed a simple, cheap way to make water safe to drink, even if it’s muddy.

It’s easy enough to purify clear water. The solar water disinfection method, or SODIS, calls for leaving a transparent plastic bottle of clear water out in the sun for six hours. That allows ultraviolet radiation and heat to wipe out most pathogens that cause diarrhea, a malady that kills 4,000 children a day in Africa.

It’s a different story if the water is murky. “In the developing world, many people don’t have access to clear water, and it’s very hard to get rid of the suspended clay particles,” says Pearce, an associate professor of materials science and engineering and electrical and computer engineering. “But if you don’t, SODIS doesn’t work.”

Thus, to purify your water, you first have to get the clay to settle out. Pearce discovered that one of the most abundant minerals on Earth does this job very well: sodium chloride, or simple table salt, which is cheap and readily available.

It doesn’t take much salt to clarify muddy water. “The water has a lower sodium concentration than Gatorade,” Pearce says.

Pearce and his students are running more tests on water containing various types of clays, and they are also investigating different soil types across Africa to see where their methods might work the best. 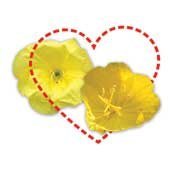 Sure, sex may be delightful, but it’s a lot of work, and the payoff is by no means certain. Scientists have long speculated on why all living things don’t simply make like amoebas and split.

Now Michigan Tech biologist Erika Hersch-Green has found one good reason: sexual reproduction strengthens an organism’s ability to adapt. Specifically, it may lead to stronger immune response by enhancing the expression of genes that make the enzyme chinase A, which is used to fight disease.

She tested the idea on thirty-two different species of evening primroses. These native North American wildflowers are unusual in that a number of species reproduce asexually, essentially through cloning themselves. That allowed Hersch-Green and her colleagues to compare sixteen species that reproduce sexually with an equal number that function asexually.

“We found that the sexual plants have an increased ability for adaptive, positive evolution,” she said. “This is in line with the theory that sex provides an evolutionary advantage to organisms. Until now, there had been no empirical evidence to support this advantage of new genetic combinations.” 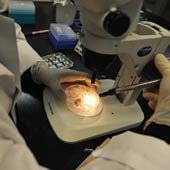 Spots on the abdomens of fruit flies are really, really small. But what a researcher and his graduate student are learning about them could be gigantic.

Biologist Thomas Werner and PhD student Komal Kumar Bollepogu Raja have discovered three genes that cause cancer in humans which also “paint” spots on the fly’s body. This discovery could enable researchers to study how those genes work in fruit flies and apply that knowledge to understanding the genetic pathways that cause cancer in people.

“The last common ancestor of man and fruit flies lived about 600 million years ago,” says Werner. “All the genes needed to build a body were already present in that ancestor, and today we still share virtually all of our body-building genes with fruit flies. This is why we are able to study human diseases like cancer in fruit flies.”

“Now we want to know how the abdominal pigment pattern is generated, and how it is encoded in DNA,” says Raja. Their work could identify targets for gene therapies against cancer. 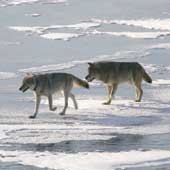 During their 2012 Winter Study, Michigan Tech population biologist John Vucetich and wildlife ecologist Rolf Peterson wondered where the wolves of Isle Royale National Park had gone. They had found only nine, and just one of them was female.

Then in May, three dead wolves, including a young female, were found floating in water in a deep, nineteenth-century mine shaft at Isle Royale. “There is no way to know how the wolves ended up falling into the pit, but very likely, accumulating snow and ice played a role in the accident,” Vucetich said.

Vucetich and Peterson point out that the young female was lost at a critical time in the wolves’ history, when a shortage of females represents the largest extinction risk for the population.

Supported by the National Park Service, the National Science Foundation, Michigan Tech, and numerous private donors and field volunteers, the wolf-moose study at Isle Royale National Park has been going on for more than fifty years, the longest continuous predator-prey study in the world. 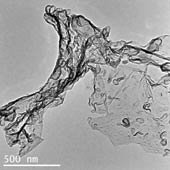 Michigan Tech materials scientist Yun Hang Hu has discovered a chemical reaction that not only eats up the greenhouse gas carbon dioxide, it also creates something useful. And, by the way, it releases energy.

Making carbon-based products from CO2 is nothing new, but carbon dioxide molecules are so stable that those reactions usually take up a lot of energy. If that energy were to come from fossil fuels, over time the chemical reactions would ultimately result in more carbon dioxide entering the atmosphere—defeating the purpose of a process that could otherwise help mitigate climate change.

“The reaction converts CO2 to a solid material,” said Hu. “That would be good even if it weren’t useful, but it is.”

And how much energy does it release? Plenty. Hu’s team added carbon dioxide to less than a gram of Li3N at 330 degrees Celsius, and the surrounding temperature jumped almost immediately to about 1,000 degrees Celsius, or 1,832 degrees Fahrenheit, about the temperature of lava exiting a volcano. 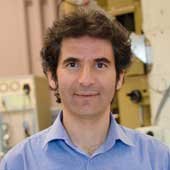 Almost perfect: blueprint for a superlens

A superlens would let you see a virus in a drop of blood and open the door to better and cheaper electronics. It might, says Durdu Guney, make microscopes as commonplace as cameras in our cell phones.

Optical lenses won’t usually let us see objects smaller than 200 nanometers across, about the size of the smallest bacterium. To overcome that limit, you need metamaterials: artificial materials with properties not seen in nature.

Guney, an assistant professor of electrical and computer engineering, is using metamaterials to design a superlens that could use visible light to see objects as small as 100 nanometers across.

The secret lies in plasmons, charge oscillations near the surface of thin metal films that combine with special nanostructures. When excited by an electromagnetic field, they gather light waves from an object and refract it in a way not seen in nature. This lets the lens overcome the diffraction limit; it could allow us to see objects smaller than 1/1,000th the width of a human hair.

Superlenses would be cheap, which is why they might find their way into cell phones. But there would be other uses as well, says Guney. “It could also be applied to lithography,” the process used in electronics manufacturing. Computer chips are made using UV lasers, which are expensive and difficult to build. “With this superlens, you could use a red laser, like the pointers everyone uses, and have simple, cheap machines, just by changing the lens.”

What excites him the most, however, is that superlenses could open our eyes to worlds now visible only to a privileged few.

“The public’s access to high-powered microscopes is negligible,” he says. “With superlenses, everybody could be a scientist. People could put their cells on Facebook. It might just inspire society’s scientific soul.”