When it comes to rowing machines, one size does not fit all.

Those ubiquitous rowing machines that populate every gym are popular for a number of reasons. They are supposed to be low impact, allow for full body movement, and increase cardiovascular endurance.

But those advantages don’t hold true for everyone, according to Karen Roemer, an assistant professor of biomechanics in the Department of Kinesiology and Integrative Physiology at Michigan Tech. Her research is demonstrating that the typical rowing machine may be a poor fit for people with a high body mass index (BMI), particularly those who are obese.

Manufacturers do make special equipment that is strong enough to support very heavy people, but Roemer has found that sturdy construction is not enough. Design is important too.

She has studied four types of subjects: overweight, obese, normal weight, and skilled rowers. To follow their movements as they worked out, she attached nearly fifty reflective markers to the rowers and to the rowing machines, then filmed them from six angles, freezing the motion using strobe lights. In particular, she looked at the rowers’ hips, knees, and ankles.

Subjects who were obese had to move their knees outward to row, increasing the load on part of the joint. She believes the machines’ restricted foot position may increase their risk of knee pain in the same way arthritis does.

“It’s interesting to me that an exercise that is supposed to be beneficial to obese people may actually cause them pain,” says Stephanie Hamilton, a biomedical engineering PhD student working on the study. “It underscores the importance of a research foundation in developing exercise equipment.”

In a follow-up study, the research team is modifying the foot position to see how a wider placement affects the loading at the joints. “It’s exciting to see direct applications come from research that can affect many people,” says Hamilton.

Roemer’s work could open the door to better exercise equipment for the people who need it the most. “Equipment should be adaptable to meet the needs of people with a higher BMI,” she said. 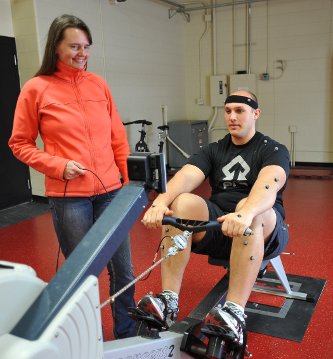 Karen Roemer oversees PhD student Erich Petushek exercising on a rowing machine. He is dotted with reflective markers used to track his movements as he works out.