Eustace Dereniak ’63 (Electrical Engineering) was selected as the recipient of the 2015 International Society for Optics and Photonics (SPIE) President’s Award in July 2015.This award is presented by the International Society of Optical Engineers to an individual who, in the opinion of the SPIE president and board of directors, has rendered a unique and meritorious service of outstanding benefit to the society

John Rees ’65 (Civil Engineering) reports: “Whidbey Island,Washington, has natural beauty every fall. This is one example.”

Greg Schurig ’72 (Mechanical Engineering) has retired after over forty-two years in the pharmaceutical industry. He retired (the first time) as director of engineering at RP Scherer (Cardinal Health) after a thirty-two-year career, and finally from HKA Enterprises as project manager. He and his wife, June ’74, split their time between Kalamazoo and Lewiston, Michigan.

Richard Newell ’70 (Electrical Engineering): “These days I am riding twenty miles on either my Gazelle or my Panasonic. I have also been swimming from 1,000 to 2,000 meters about four times a week. This year will mark thirty-four years as a Boy Scout leader. My son, Richard U. Newell, has been playing in regional and national contract bridge tournaments. I should never have taught him to play bridge.”

Allyn Abel ’81 (Mechanical Engineering Technology) has spent the last thirty-two years in various aspects of machine/ systems design and project management. He has been an adjunct professor for twenty-plus years at Western Michigan University, ITT-Tech of Grand Rapids, and Baker College of Muskegon, including eight years as a full-time department chair/ instructor of CAD, Arch, QI, and industrial tech programs. Currently, he is designing industrial band saws used for cutting wood, metals, and other materials.

Kerstin Cleveland ’14 (Chemical Engineering; Pharmaceutical Chemistry) married Nathanael Green ’14 (Pharmaceutical Chemistry; Biochemistry and Molecular Biology) on the ultimate pi day—March 14, 2015 (or, 3/14/15)—in Houston,Texas, where they both live and work. They are second-generation Michigan Tech sweet-hearts, with Kerstin’s parents, Michael ’82 and Marie ’82 (Weiss) Cleveland, meeting at Tech as well.

Steven Bailey ’10 (PhD, Rhetoric and Technical Communication) is an associate professor in the English Language and Literature Department at Central Michigan University, where he directs the composition program. He has written four travel guidebooks and is actively researching composition and rhetoric, creative nonfiction, and travel writing.

How did you start writing travel guidebooks?

I was fortunate to grow with a small San Francisco-based company that published the travel magazine Things Asian, which later morphed into a travel website: www.thingsasian.com. I wrote nearly 100 pieces for them on everything from Vietnamese water puppets to Filipino jeepneys. When the company relocated to Hong Kong and began publishing books, I proposed a series of guidebooks. My first guide to Macau—the former Portuguese colony about 40 miles southwest of Hong Kong—was published in 2007, and I have written three more since then.

How do you approach guidebooks in a scholarly way?

Plenty of scholars have noted that while many travel guidebook publishers claim to be socially conscious, their guidebooks do not really deliver on this promise. However, no scholars that I am aware of have offered concrete, practical solutions for rethinking the travel guidebook genre. I aim to fill this gap and ask how the genre can be redesigned to produce the socially conscious goals that the big guidebook publishers claim to shoot for.

Writing is sometimes viewed as antiquated, something people used to do. Why are writing skills relevant in the 21st century?

Writing technology has certainly changed—writing is now almost entirely performed in a digital environment—but the need for writing itself has not. Research has shown that college students who learn to write well tend to do better in the workplace. Strong written communication skills are more vital to student success than ever before—including STEM fields.

Writing centers are prominent at many universities. Why are they so central?

At Central Michigan University, the Writing Center is going strong. Another graduate of Tech’s RTC program, Dr. Lori Rogers, serves as its associate director, in fact. The CMU Writing Center supports student writers, contributing to their academic success. This improves student retention and graduation rates—a central concern not just at CMU, but on all university campuses. However, writing centers are also coming to the forefront on university campuses because they help students develop the written communication skills employers say they need in new hires—but haven’t been seeing in recent graduates.

What’s the most interesting place your travels have taken you?

I have been to nearly 50 countries, and every last one of them was interesting.That said, Hong Kong has held my interest for several decades. A grant allowed me to spend some time there this summer researching for a book project, which focuses on the American air campaign against Japanese-occupied Hong Kong during the Second World War. I found Hong Kong to be just as fascinating as I did when I first visited the city in 1986, when it was still a British colony. 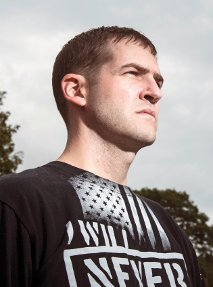 Justin M. Fitch ’05— who was featured in the previous edition of the magazine—passed away on October 4. He had been battling stage 4 cancer for some time, but he didn’t let it get in the way of his mission: preventing veteran suicides. He participated and helped organize a series of ruck marches to raise both funds and awareness. He never stopped trying to help others carry their burdens. His story hit the national press over the summer, and enough money was raised through his campaign for Active Heroes to build the first two cabins at a retreat center in Kentucky for veterans and their families. His wish was to see the retreat open, and while it isn’t there yet, he must have known that it was well on its way.

Justin was an inspiration to us all as we put the last issue together, his determination and positivity never missing a beat. He will long be remembered by everyone who had the honor of meeting him.

Donations to Active Heroes can be made to www.activeheroes.org/donate.