By Allison Mills
Published 3:08 p.m., May 12, 2015
Category: Science And Engineering, Environment And Sustainability

Wind turbines appear simple, but it’s the complex engineering behind the technology that makes harnessing the wind seem like a breeze. Bridging the gap between mechanical details and large-scale infrastructure needs of wind turbine technology is also no easy feat.

The Bhakta Rath Research Award was established in 2010 by an endowment from Michigan Tech alumnus Bhakta Rath, and his wife, Sushama Rath. The award offers an opportunity to promote and reward excellence for “exceptional scientific and technological research in anticipation of the future needs of the nation while supporting potential advances in emerging technology.” Each year a Michigan Tech PhD graduate student and his or her advisor are recognized.

Velazquez says the award is an honor and a reflection of their hard work, which was published in high impact journals, including the Journal of Sound and Vibration and the Journal of Intelligent Material Systems and Structures. The research focused mostly on using wireless sensors to monitor the structural integrity and efficiency of wind turbines. 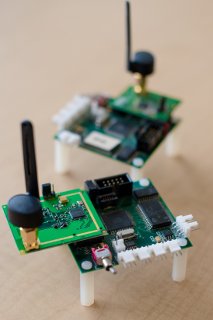 Velazquez compares their work to visiting the doctor’s office. Just as a doctor takes blood pressure, listens to heartbeats and orders blood work to diagnose a patient, Velazquez and Swartz monitor the health of wind turbines. Their wireless sensors look for irregular vibrations and strain that can be caused by tower fatigue and many other specific structural symptoms that can lead to failure. Those symptoms can tell the team what’s gone wrong in the turbine’s machinery. But sorting the windy day vibrations from the mechanical failure vibrations can be tricky. So, they use mathematical models to find patterns in the data, which helps clarify potential problems in the turbine infrastructure.

In addition, the sensor system attempts to estimate the risk posed to the structure from the environment, like ice build up, strong winds and lightning damage. These stresses are random, and more difficult to predict their impacts than just reading a turbine's structural symptoms, but understanding them is critical to estimating risk.

The researchers don’t just diagnose, however. Velazquez and Swartz are like doctors who build their own stethoscopes.

“We’re giving people tools — they’re homemade solutions, but then we use sophisticated engineering to take it a step further,” Velazquez says. The tools they developed include the wireless sensors, open-source MatLab programming and models of wind turbine structural stresses. Velazquez hopes to continue refining these tools and process through a tenure-track faculty position he accepted at Ohio University. “We don’t just make observations, we are delivering a practical method that anyone can use who wants to design and analyze turbines.”

Swartz developed the wireless sensors during his dissertation and says they have a number of applications, including monitoring bridges, buildings and anything that spins, like a helicopter or Ferris wheel.

“The idea behind structural health monitoring is to get useful information,” Swartz says, explaining that collecting data for the sake of numbers takes the wind out of a turbine’s sails. The recorded data has to have a physical connection — like an irregular vibration recorded by the sensor has to connect to a wobbly blade instead of coming from a change in wind direction. The data itself doesn’t always make that connection clear. The models the team developed shape the data into useful and statistically significant information.

“There are the obvious safety implications,” Swartz says of applying the models to ensure the turbines are safe to use and work on. But he explains they can also help with more nuanced monitoring for preventive care to reduce the economic risks that come along with these structures. “With the blades and the gear boxes, there’s a lot of moving parts that are very big, and they degrade over time and in random ways.”

Both Swartz and Velazquez emphasize the link between the mechanics and infrastructure of wind turbine technologies. As the wind turbine industry expands — the Institute for Energy projects industry growth of 20 percent by 2030 — the energy sector will need more collaboration between mechanical and civil engineers.

Even with the rise of wind turbines across America’s horizons, Velazquez points out that the work of engineers tends to be invisible.

Perhaps engineers like Velazquez and Swartz do their turbine doctoring quietly, but increasing the number of wind turbines in the public eye — and making them work more efficiently behind the scenes — definitely beats a memorable root canal.