When flood waters rise, more data helps better predict and monitor changing conditions. And soon there will be an app for that.

The National Science Foundation (NSF) awarded a new Smart and Connected Communities $1.5 million grant to a team of computer scientists and hydrologists from Arizona State University, Michigan Technological University, Northern Arizona University, University of Arizona and University of Buffalo. The team’s goal is to develop an integrated network that gathers, analyzes and alerts urban communities in danger of flooding.

The system is called the Integrated Flood Stage Observation Network (IFSON) and can take crowdsourced flood data, like smartphone photos, webcams and social media posts, then use image processing to assess flood stage and potential damage. Later versions of the app will use machine learning techniques. With those risks identified, IFSON can communicate flood information to first responders in real-time. The platform will be adaptable for different neighborhoods and communities.

“We plan on developing several novel technologies for real-time flood monitoring for integration with webcams, with image recognition, social media mining, smart phone apps and calibration tools,” says Mikhail Chester, principal investigator for the NSF grant and associate professor in the School of Sustainable Engineering and the Built Environment at Arizona State University. “The prevalence of smart phones and webcams create new opportunities that haven't existed to provide insights into what's happening in the world around us. We want to put those tools in the hands of communities to protect themselves against extreme events.” 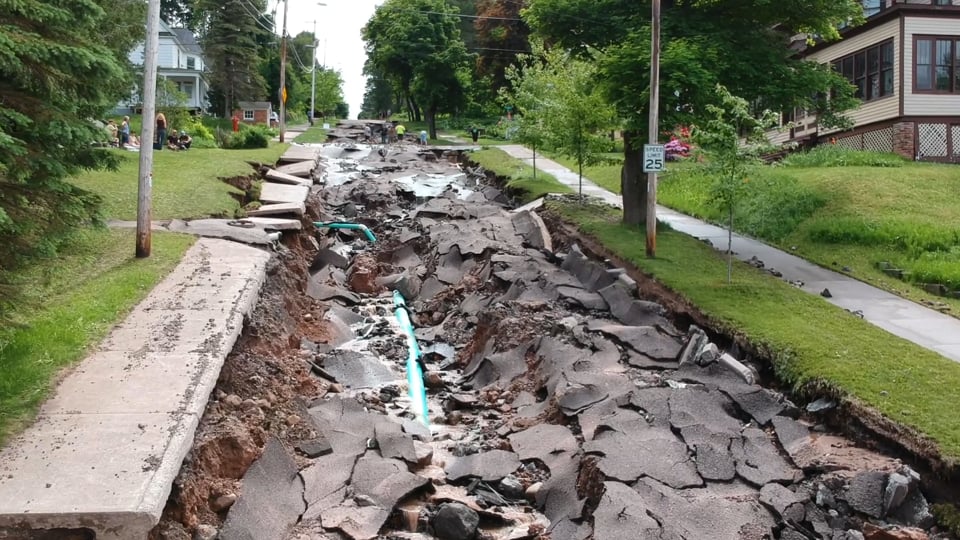 A 1,000-year flood in Houghton County tore up local streets in June 2018. A system like IFSON could have helped first responders monitor the flash flooding and communicate with people stranded by road wash outs. Credit: Adam Johnson/Brockit Inc.

Tech For and By the People

"Flooding is the most damaging natural hazard in the U.S. and around the world, and most flood damage occurs in cities. Yet the ability to know when flooding is happening and communicate that risk to the public and first responders is limited."Smart and Connected Communities grant proposal

He goes on to explain how the app itself works. It all starts with a photo of a strip gauge uploaded by a user; using image-processing techniques, the app counts the number of strips above the water line to infer the stream depth. Photos taken over time and from many locations can calculate changing water levels and the extent of a flood, and this approach has been the focus of past app development. The new version of the project will use machine learning—a kind of artificial intelligence that adapts its algorithms over time as the system is exposed to more and more data—and can enhance the app’s risk calculations, shifting from a reactive monitoring platform to a proactive predictive platform.

“More data means we can answer important questions,” Pastel says. “When does flooding occur, and where and how much?”

The new IFSON apps and platforms will be completely new interfaces that were piloted by student projects in some of Pastel’s undergraduate courses. The first project came from the Human-Computer Interactions and Usability course, which provided feedback on the features best included in the app. The next project, developed by a computer science senior design team, is called Mobile Hydrology and focused on pulling in more citizen science.

Undergraduate research will continue to be an important part of the IFSON system moving forward, even as the interface and analyses of the apps undergo updates and makeovers. The end result will be a highly integrated platform that moves forward education, public outreach, flood warnings and computer science applications.