Autonomous vehicles can go where humans cannot. Some dive deep under the ocean, others fly high in the sky. Some drones are being used to respond to disaster sites, like the Nepal earthquake, as well as to power microgrids, to fly over battlefields, to monitor climate change and to observe underwater biodiversity. Eventually, autonomous vehicles might even deliver goods or drive our cars for us — both are active Google projects. Controversy surrounds many of these endeavors, but the technical aspect holding back autonomous vehicles is energy efficiency.

Nina Mahmoudian has received the National Science Foundation’s (NSF) prestigious CAREER Award, which provides $500,442 to overcome this limitation. The grants are given to early career researchers who excel in both research and education, both of which are important parts of Mahmoudian’s Nonlinear and Autonomous Systems Laboratory (NAS Lab) at Michigan Technological University.

Mahmoudian, an assistant professor of mechanical engineering-engineering mechanics at Michigan Tech, focuses on the continuous operation of autonomous vehicles. In other words, she is finding ways to make these robots do their jobs longer with no human intervention.

While versatile, autonomous vehicles have to run on a short leash. Top of the line equipment lasts only about eight hours in the field before having to come in to charge or refuel. Mahmoudian’s work focuses on how to power these machines on the fly. 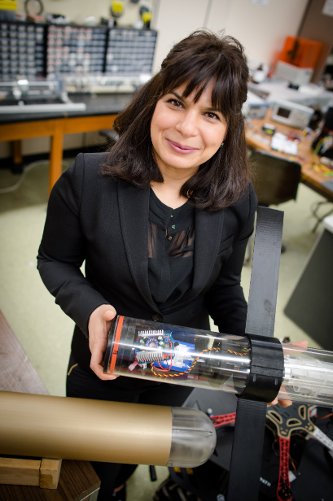 “Basically what we’re looking at is creating a team of robots that recharge and maintain other robots,” Mahmoudian says, explaining this is called continuous operation. She compares the autonomous vehicle robots to a cell phone: With a limited battery charge, the battery dies in the middle of a conversation — but imagine if a smaller machine could swoop in and charge it. An autonomous vehicle’s work, or a cell phone’s call, could go on uninterrupted.

This mobile and autonomous charging system should also lower costs, while better coordinating the vehicles themselves. Mahmoudian adds that coordination is the main focus of her CAREER Award research, and she plans to develop a clearer understanding of how the robots move together in formations as they run through charging cycles.

“Think of this like a flock of birds or a school of fish,” she says. “When we look at these formations in nature, they’re efficient — and we want our robots to be just as coordinated.”

Aboveground, this is tricky enough. But Mahmoudian focuses on a harder challenge; she is developing better coordination for autonomous underwater vehicles, or AUVs. Her research in this field earned Mahmoudian another award through the Office of Naval Research’s Young Investigator Program. Designing better underwater vehicles involves confronting challenges in mechanical engineering, software development and networking, making the research highly interdisciplinary.

In that spirit, Mahmoudian says her CAREER project engages Michigan Tech’s Great Lakes Research Center as well as the Center for Agile and Interconnected Microgrids. As a team, they will be able to establish experimental plots underwater and run tests to refine the technology developed throughout the process.

Education and Women in STEM Fields

In addition to a strong research plan, the award was given to Mahmoudian for her commitment to integrating research and STEM (science, technology, engineering and math) education. She is particularly concerned with increasing underrepresented minority participation and success.

“Nina is a talented and dedicated researcher and teacher, and receiving the prestigious NSF CAREER award is a testament to that,” says Bill Predebon, chair of the Department of Mechanical Engineering-Engineering Mechanics. “She is an excellent role model for our students, particularly our women students.”

As one NSF reviewer commented, Mahmoudian’s “education and student engagement plan is particularly strong. As a female faculty, the [researcher] seems to take the gender imbalance problem very seriously and will stand out as a role model in a discipline that very much needs female role models.”

For her part, Mahmoudian says many young women see a disconnect between societal needs and engineering.

“Yet engineering has direct and positive effect on people’s everyday lives. Engineers create, innovate, and find solutions for societal problems and transform many ideas into realities,” she says.

Inspiring young scientists-to-be led Mahmoudian to actively participate in a number of local STEM outreach programs like Water Festival and Summer Youth Programs such as Women in Engineering and Engineering Scholars. She and her NAS Lab team teach students using a tube-like underwater robot called GUPPIE, short for Glider for Problem-solving and Promotion of Interest in Engineering.

“We want to make these platforms accessible to teachers and students for in-class and after-school teaching,” Mahmoudian says, adding that they also put together teaching material and hands-on activities to teach a variety of STEM concepts.

Specifically, for the CAREER Award, Mahmoudian and her lab will team up with Western Upper Peninsula Center for Science, Mathematics, and Environmental Education and Michigan Tech’s Center for Educational Outreach to engage students and teachers from local, rural school districts.

The project provides interdisciplinary training opportunities for graduate and undergraduate students as well.

“Professors share a great responsibility in advising students in choosing their career path and developing their intellectual capabilities,” Mahmoudian says, adding that research and education should be integrated. That connectedness and coordination is reflected in all of Mahmoudian’s work as she combines fundamental research with applied research to seamlessly transition between academic problem solving and real world applications.