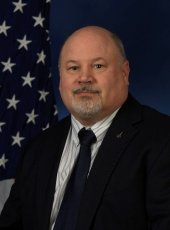 Mr. Smith received his commission in 1982 after graduating from the United States Air Force Academy with a Bachelor of Science degree in Aeronautical Engineering. During his Air Force career, he served as a squadron and wing weapons officer, Navy exchange F/A-18 instructor pilot, F-15C instructor pilot, operational test pilot, standardization and evaluation flight examiner, squadron operations officer, Chief of Cope Thunder (now RED FLAG AK), and Chief of Weapons and Tactics at the USAF Warfare Center. In addition, he is a veteran of DESERT STORM, PROVIDE COMFORT, and SOUTHERN WATCH. After retiring as a Lieutenant Colonel in 2003, Mr. Smith served as the Senior Advisor and Chief F-15C instructor pilot at the Royal Saudi Air Force Weapons School. He returned to Alaska in 2008 and accepted the position of Fighter Planner at the 611 AOC, JBER, AK. In 2010, he was promoted to Special Assistant to the Commander and in 2016 was designated the Deputy Director. Mr. Smith retired from Civil Service in 2020 and began instructing at Michigan Tech AFROTC Det 400 in 2022.