Testing the claims of beauty products requires testing the machines that assess those claims.

We’ve all seen commercials for lotions and creams that claim to add elasticity back to our skin to make us look and feel more youthful. Legions have believed these marketing tactics and rushed out for the latest product. But are the claims of greater skin elasticity actually true? Can beauty products truly make one’s skin more youthful not just for a day or two, but improve the elasticity of skin over time?

Sean Kirkpatrick’s biomedical optics laboratory at Michigan Technological University has spent the summer conducting tests on a machine that would help the chemists and engineers at Avon quantify how their products affect skin elasticity.

One of the test subjects? Me.

Typically, dermatologists evaluate skin firmness using visual grading as well as interviews with consumer panels who agree to test the products on themselves. Avon scientists partnered with Michigan Tech to develop a quantifiable method that removes the subjectivity of improving skin elasticity and firmness.

To that end, Avon has partnered with Michigan Tech. Kirkpatrick, professor and chair of the biomedical engineering department, along with several students, has tested how well an optical elastography machine measures skin elasticity on 30 people across a range of age groups.

“(Avon) wants to use (optical elastography) not only to select different formulations they’re developing, but do long-term studies,” Kirkpatrick says. “If someone puts the lotion on every day for a couple of weeks or months, what’s the long-term effect on the skin? Does the effect of the moisturizer go away every night so you need to put it on every day, or is there a gradual change?”

One of the perks of writing for Michigan Tech is the opportunity to participate in research and write about the science behind it. Studying the effects of yoga and meditation on stress? Sign me up! Does use of a standing desk prevent arterial stiffness? Sounds like a free doctor’s appointment to me. Can lotions, serums and creams improve my skin elasticity? Well, why the heck not!

Taking my duties as lab rat seriously, I presented myself to the biomedical optics laboratory earlier this summer. Abhinav Madhavachandran, a graduate student in the biomedical engineering program, and Ami Kling, an undergraduate in the same program, would spend the next hour and a half testing the optical elastography system. My part was to extend my arm with its various product test and control sites, sit still and hold my breath when the camera was snapping images at a rate of 200 frames per second. 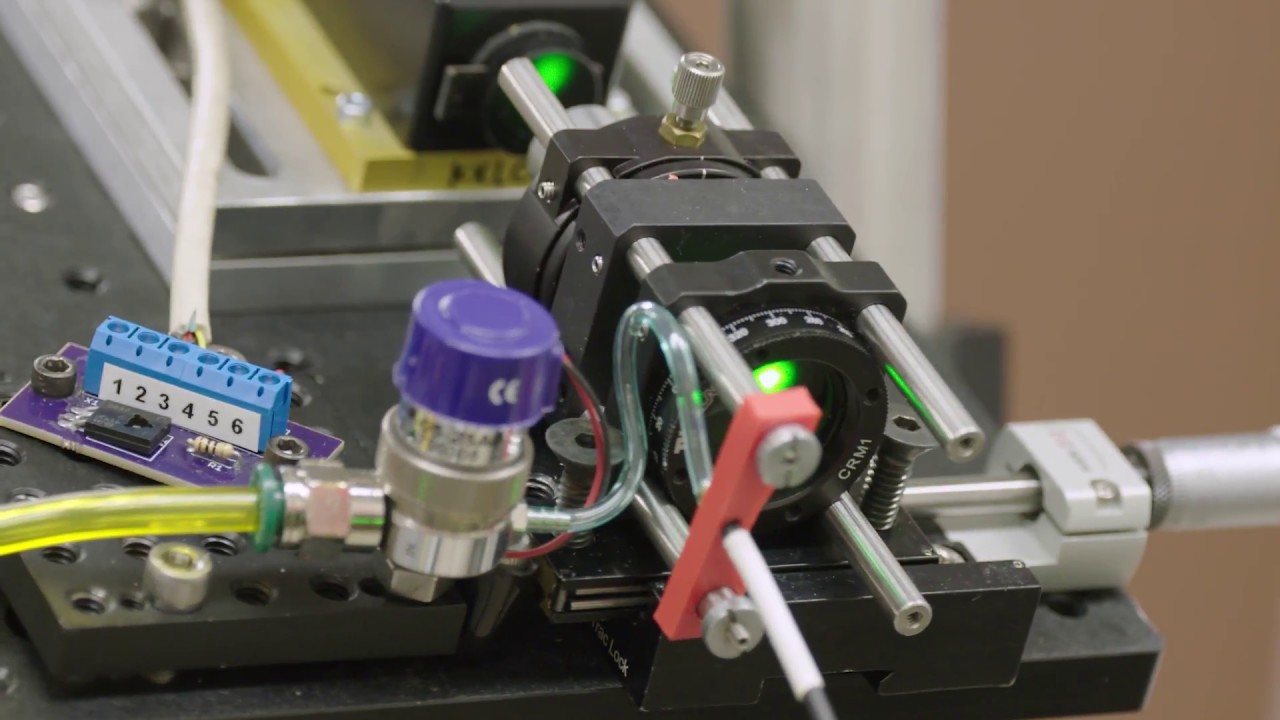 The optical elastography equipment is currently encased in a large metal shell, from which snake wires attached to a laptop running a computer program to analyze the resultant data. One of the goals of the lab is to reduce the size of the machine to a hand-held device, which means Madhavachandran’s background in electronics is particularly useful. But for now, it requires manual adjustments by a graduate student with healthy bicep muscles.

Kirkpatrick’s field of research is the biophysical applications of light scattering. He initially developed the lab’s optical elastography and corresponding computer coding for skin cancer research. He and other researchers were looking at differences in the mechanical behavior of cancerous lesions. The resulting technology is now being applied to the efficacy of over-the-counter firming agents and wrinkle reducers.

Once Kling had finished marking my inner upper arms (this area chosen because most people aren’t deeply committed to tanning their armpits) and applying the lotions, I was seated in front of the machine and outfitted with protective safety glasses to protect my eyes. The laser could be compared to that in a grocery store scanner, except it’s carefully calibrated to a specific polarization. A tiny, slender tube applied sinusoidally modulated puffs of air to my skin, which I could barely feel. The light from the laser—its wavelength set so it penetrates only the top 70 microns of skin—scattered back off my arm in a random diffraction pattern.

A single measurement may have taken two seconds, but the entire procedure did not. Because this work is to test the machine, not the skin products per say, Madhavachandran and Kling took multiple measurements, and occasionally redid measurements to make sure they had the most precise images for the algorithms to analyze.

Looking at my skin when the laser was imaging, it looked like there were hundreds of tiny grains of rice jumping around on my skin.

“When the rough surface (of the skin) moves, these grains start to move. We capture that movement at a high frame speed,” Madhavachandran says. “Using the code Kirkpatrick wrote, we can analyze how much movement has actually happened.”

As people age, skin loses its elasticity—its ability to stretch and then go back to normal after the stretch is gone—which causes wrinkles and sagging. Because age has the biggest impact on skin elasticity, so the trial included ten people from a 20-30, 30-50 and 50 years or older age brackets. You, dear reader, get to guess which bracket I fit into.

Once the trial has concluded, Kirkpatrick and his students can present their research to Avon to determine how the company can use the technology to bolster its claims that its firming products actually perform as advertised.

Eventually, hand-held optical elastography machines could make quick work of product testing and dig deeper (or rather, go shallower) to see if people’s remarks on skin firmness line up with an actual measurement.

The technology is an example of taking tried-and-true messaging—get youthful skin now!—and plumping it with some real evidence. Ding dong, it’s science.