Michigan Technological University’s transdisciplinary researchers reach across disciplines and institutional boundaries to solve complex problems that are bigger than a single specialized field.

Imagine sitting down for a five-course meal and realizing that eating each course meant moving to a different table. Water at one table, salad at another, the main course at still another table. Not only that, but there’s room for only one person at each table, so the friends who came to have dinner with you must eat separately.

Real-world problems are often like this imaginary and weirdly disjointed meal, and attempting to solve a problem using one tool at a time in isolation — much like eating one course of a five-course meal alone — is inefficient and unenjoyable.

Using mixed methodologies and applying multiple theoretical frameworks, Michigan Tech’s transdisciplinary researchers create new ways to solve complex problems that are beyond the scope of a particular field. One such collaboration is taking place between the computer science along with cognitive and learning sciences that builds on a program fostered by computer science and humanities.

Back to the Basics

The Basic Adult Skills in Computing (BASIC) program is a collaboration between the Computer Science and Humanities departments at Michigan Tech. Charles “Chuck” Wallace, an associate professor of computer science, with former humanities professor Lauren Bowen reasoned that a lack of digital literacy among older adults was a problem (though digital literacy is not limited to older adults, the program’s scope is focused specifically on older adults).

“We soon saw recurring patterns of behavior among the learners at our help sessions,” Wallace says of the help sessions the project facilitated with a number of older adults. “Some learners encounter substantial barriers in adopting digital technology. What the barriers are and how to address them depend on attitudes, motivations, and prior experiences of the learner, as well as design decisions in the technology itself.”

Wallace adds it was apparent that human factors psychology could help frame the problem of barriers to digital literacy and focus inquiry. He reached out to Kelly Steelman, an assistant professor of cognitive & learning sciences. The team is poised to conduct transdisciplinary research—Wallace has a background in linguistics that he has applied to computer science, and Steelman earned graduate mechanical and aerospace engineering degrees before earning a doctorate in psychology.

Steelman says that while the majority of her research has focused on performance in large-scale visual environments, like airplane cockpits, the general theories apply to smaller-scale environments like websites on computer screens.

“I started out by simply attending the BASIC tutoring sessions and observing the interactions between the tutors and older adults to get a better sense of the challenges they were facing,” Steelman says.

"During that first session, we were short on tutors, and I had the opportunity to tutor someone myself. I was hooked. Not only was this a domain of research that connected well with my theoretical interests, but this was a project that had so much potential to do good for the community."Kelly Steelman

Since then, Steelman and Wallace have conducted interviews with tutors using cognitive task analysis techniques. Steelman notes that this provides a window to see barriers to digital literacy and to identify ways to improve the tutoring program.

The main barrier? Tech-related anxiety that tutors struggle to overcome with tutees.

“Interestingly, our data suggests that anxiety may not simply be a barrier to trying new technologies, but may actually be impairing the development of higher order digital literacy skills,” Steelman says.

The research team plans to test this hypothesis in the coming months, and use the findings of those experiments to improve the tutoring program and to develop online assistive technology to support the development of digital literacy. They think their success comes down to transdisciplinary and diverse approaches to a problem.

Steelman says diversity is good for problem solving. If you only have a spoon, the only food you’ll want to eat is soup.

“The more tools you have available to your research team, the more likely you are to consider a variety of solutions and not get stuck always trying to use the same approach to every problem,” she says. “The more perspectives we bring to the table, the better opportunity we have to create innovative and transformative solutions.”

Wallace pointed out that conducting transdisciplinary research means more cooks in the kitchen; an environment in which theories and methodologies, much like unfamiliar ingredients, are used with gusto rather than refused; and requires a willingness to accept different kinds of rewards for conducting such research

“The great challenge in transdisciplinary research is finding a colleague who is willing to commit fully to the work,” Wallace says. “Traditional reward systems, like tenure criteria, can curb enthusiasm for transdisciplinary work if they do not value it adequately. I decided a while ago, however, that I am less interested in earning points for promotion than I am in doing exciting and meaningful work."

"I also love learning, which is something that comes naturally when you work with people in other disciplines. And I am fortunate to have in Kelly a research colleague who is all in."Chuck Wallace

But transdisciplinary research doesn’t stop at the edges of a college campus. Or the tablecloth. There's a whole restaurant after all and everyone needs to eat.

Up next…part two, Transdisciplinary: Beyond the Academy, will feature the importance of research that includes collaboration with people outside of academia. 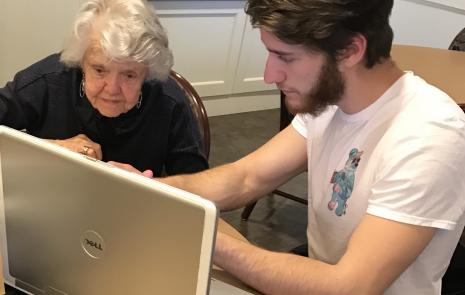 As the digital revolution continues to transform our society, many older adults and other groups are being left behind. Digital competency for these citizens is a hidden and...