Only two wolves likely remain on Isle Royale National Park. Additionally, moose have increased, and the high number of calves and low predation rates suggest that the population will continue to boom. In this guest blog, John Vucetich and Rolf Peterson, ecologists who oversee the world's longest running predator-prey study, share their view.

The wolves of Isle Royale National Park are vital to the ecosystem health of that remote wilderness island in Lake Superior. But the wolves of Isle Royale are about to be driven to extinction and humans are unquestionably involved in their demise. The wolf population has been driven to small numbers by inbreeding. In days gone by, inbreeding was avoided by ice bridges that once allowed mainland wolves to infuse the Isle Royale population with new genes. Today, ice bridges form too infrequently as a result of human-caused climate warming. Human-introduced disease is also likely to have exacerbated the wolves’ situation.

Wolves are important for the ecosystem service they provide, which is predation. Isle Royale wolves have been too impaired by inbreeding to effectively provide their ecosystem service for the past five years. Each passing year without effective predation increases the risk that moose will do long-term damage to the forest – damage not easily undone.

The wolves of Isle Royale are special because after centuries of persecuting predators around the world, Isle Royale is one of the last – if not the last – forest in the world where humans do not hunt wolves or moose or log its forests.

Conservation scientists are in universal agreement that wolves are a vital element of ecosystem health in ecosystems inhabited by large herbivores such as moose. A group of forty-seven scientists sent a letter last year imploring the National Park Service to restore wolf predation on Isle Royale. The Park Service has already received thousands of comments from the public on this issue. Those comments suggest that more than two-thirds believe the Park Service should already have acted to help the wolves. The comments also suggest that, in total, eighty-six percent believe there should be wolves on Isle Royale even if their presence involves human intervention.

A few people object to restoring wolf predation on Isle Royale, believing that humans and nature ought to remain fundamentally separated in National Parks and wilderness areas. A shortcoming with that view is that we passed up the opportunity to remain fundamentally separated from nature when we began harming protected areas with climate change, exotic species, and other human impacts. From this point forward, protecting what is beautiful in nature will increasingly require us to mitigate harms that we have caused. But first we have to decide that mitigating our harms is a right thing to do.

To learn more about the wolves and moose of Isle Royale visit www.isleroyalewolf.org.

Geneticists measure the severity of incestuous relationships with inbreeding coefficients, falling on a scale between 0 and 1.

The effects are visible with the pup observed on the island in 2015, which had an inbreeding coefficient of 0.438. 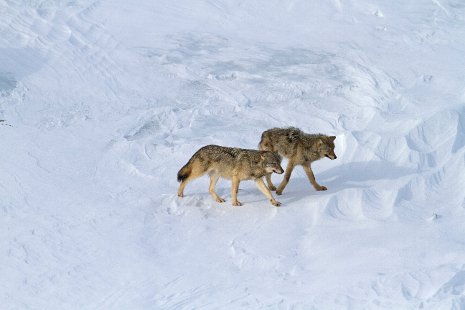