L’Anse leverages utility and university partnerships, as well as the know-how of its greatest asset, its citizens, to establish community solar.

The village of L’Anse is a small town in Michigan’s Upper Peninsula on Lake Superior’s Keweenaw Bay. Though little, the community has something big to boast about: A 340-panel, 110.5 kilowatt (kW) community solar array.

The idea behind the array, which is located in the village's Lambert Road Industrial Park just west of town, is that renewable energy should be accessible to all, regardless of income. After working on an economic development study with the Western Upper Peninsula Planning & Development Region (WUPPDR), the village determined it would be advantageous to have a renewable energy component as part of its industrial park, and began working with Michigan Technological University faculty and students on technical and social aspects of undertaking such a project.

L’Anse is one of 2,000 communities across the nation with its own municipal electric utility. Established for the benefit of those they serve, these not-for-profit utilities focus on serving local needs reliably, affordably and with renewable energy options customers want.

Play Growing Solar From the Ground Up video 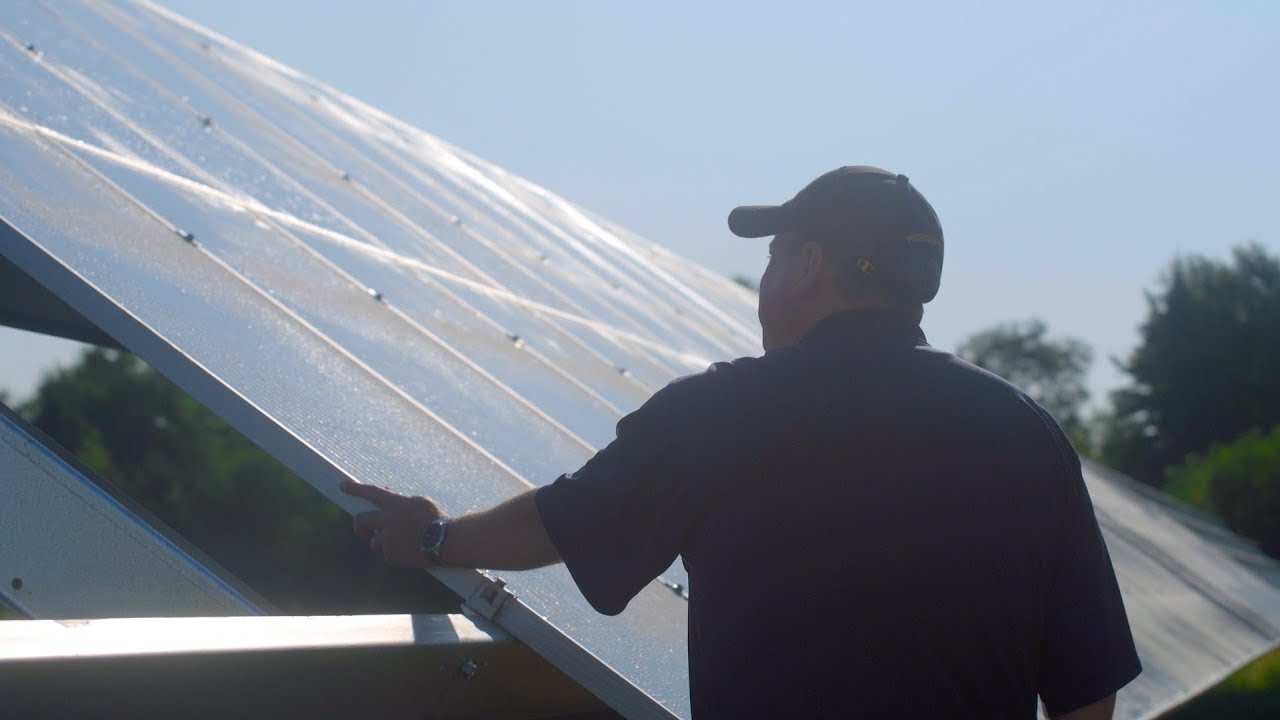 Growing Solar From the Ground Up

“We put in an 11.4 kW solar array at our water treatment plant a few years back,” said Bob LaFave, village manager and doctoral candidate in environmental and energy policy at Michigan Tech. “We were experiencing some savings. A community solar array fit perfectly within our economic development strategy, and it would help make the technology available to anyone in the community who was interested in having something like this done.”

LaFave reached out to Richelle Winkler and Chelsea Schelly, both associate professors in the Department of Social Sciences, and to Jay Meldrum, director of the Keweenaw Research Center. The Michigan Tech researchers split the project in two: technical feasibility and social feasibility.

Giving the Project the Green Light

Meldrum is Michigan Tech’s executive director of sustainability and advisor to the Alternative Energy Enterprise team; some of the students in the Enterprise chose to help with the technical side of the project. They produced a report in 2015 about how much the project would cost to install, whether it would pay for itself reasonably and whether the selected industrial site would fit the project well.

A favorable technical report in hand, the next phase of the project was to determine whether the community of L’Anse saw value in the project. Community solar feasibility depends upon interested community members willing to purchase access to a panel (or multiple panels). In return, they see savings on their utility bills.

Emily Prehoda ’16 ’19, who was a doctoral student at the time, conducted initial interviews in the community and the team hosted a well-attended community meeting. From there, students in Winkler’s Communities and Research course conducted surveys, hosted additional community meetings and walked door-to-door to chat with community members.

SS 4700: Communities and Research is a rural sociology course open to all majors that analyzes the sustainability of rural communities (socially, environmentally, economically and culturally). Students practice research skills while making a difference in improving community life. Past courses have analyzed generating geothermal energy from mine sites, community recycling, community walkability for schoolchildren, local food systems and community incorporation and dissolution.

“We thought people would like community solar because they’re environmentalists or because they want to save money on utility bills,” Winkler said. “From the community meetings, we learned people were excited about the community aspect of it. They said, ‘We can be leaders, we can be proud of our community, we can come together to get things done when we want to.’”

There are other advantages to community solar. Participants share energy generation, can capitalize on a sunny location even if their residences are surrounded by shade trees and have maintenance needs covered by village staff. Also on L’Anse’s side is the support of its municipal wholesale power provider, WPPI Energy. Unlike an investor-owned utility, not-for-profit WPPI is owned by L’Anse and 50 other like-minded communities.

Brett Niemi, a WPPI energy services representative serving L’Anse and its municipal electric utility, said that while he’s worked on other community solar projects in his role, working with a university this time around eased the growing pains that can come with such projects.

“Working with Michigan Tech, we were able to increase the skill set of our utility team, especially when doing social feasibility studies,” Niemi said. “As utilities, we’re good at building solar PV projects, but we’re not as good as when it comes to the social and feasibility side. We’ve better learned how to successfully engage with community members, and we’ve brought industry knowledge the community and researchers needed. It’s a symbiotic relationship.”

L’Anse built and began using its solar array in late summer 2019, making it the third community in the Upper Peninsula (after Escanaba and Marquette) and the first in the western UP to do so. While there are currently 340 panels, there is room for more. In its energy plan, the village secured grant funding to help make panel purchases affordable for people from different financial backgrounds, including payment plans and programs to help low-income families participate. LaFave hopes the project will prove so popular they’ll need more panels.

“This can hopefully be used as a model for other communities,” LaFave said. “It could help other communities gain access to this technology for their residents. And this has been an opportunity for Michigan Tech to leave its fingerprints in the local communities close to the University and have a positive impact on residents.”

The community solar project in L’Anse is just one example of how communities and universities, working together, can grow ideas into realities.