So popular that it spawned a competitive club, Michigan Tech's Introduction to Log Rolling course is the latest way for Huskies to have fun, stay fit and earn PE credit.

Two by two, students clamber onto the red, cylindrical log floating in the pool at Michigan Technological University's Student Development Complex. Steadied by students holding the log in place at either end, competitors brace for the start command: "Ready. Steady. Roll!" 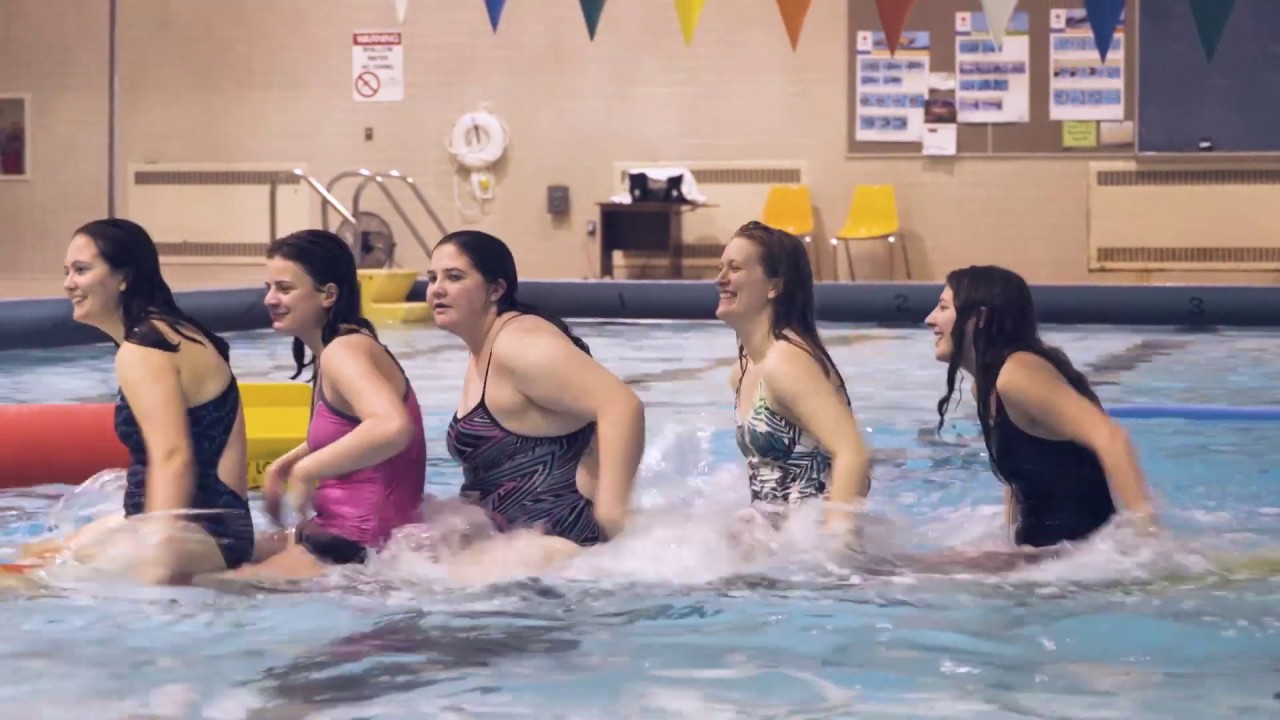 Warm-ups, drills and competition take on a whole new perspective when you're standing on a log.

The log is loose. Game on. It's a balancing act: part psyche-out, part agility — a complex dance that always ends with a splash. Basic moves include cuffing (starting the roll), snubbing (stopping the roll), spinning, reversing and splashing — anything to take opponents off balance. The process is repeated until two competitors remain.

"The longer you do it, the more tricks you can learn," said Jake Voss, a senior majoring in chemical engineering. He didn't need another physical education credit. He's there for the fun.

"It's a definite highlight to my day."Jake Voss, class and team member

Jared Johnson, instructor, and director of Michigan Tech's Outdoor Adventure Program (OAP), said balance, core strength, foot speed, hand-eye coordination, working with the non-dominant side of the body and overall agility are some of the benefits. "It's more of a workout than people might think," he said.

Keep your eyes on their feet.

The class debuted (and quickly filled) in fall semester. Students liked log-rolling — or birling, as it's officially known — so much that they started a student organization and signed up for their first competition. Chemical engineering major Maggie Evans, a senior, is president.

"I needed a gym credit, and it sounded fun and interesting," she said. "Twenty years down the road I can tell my kids I competed in log rolling at the collegiate level."

Evans noted that the history of log rolling is a story of necessity, not recreation, during the time  when timber was transported on the water and lumberjacks herding their product to market needed to break up jams. The fleetest, most sure-footed among the lumberjacks who kept the logs moving began to compete — and a sport was born.

Eighteen members, mostly students in the class, headed down to the 2018 Key Log Rolling Collegiate Tournament series hosted by Indiana's Purdue University in October. Six Huskies competed in the women's division; Ally Kiekhaefer rolled to a first-place finish, and Via Ouelette-Ballas took third. In the men's division, teaching assistant Brady Severt took second place. Will Otto won third. "It was a great showing for Michigan Tech in our first collegiate tournament series, bringing 62 percent of the competition, and taking home 66 percent of the hardware," says Johnson. Michigan Tech plans to host a tournament here on April 6, 2019.

Michigan Tech students had an edge at the competition; most universities don't offer an actual course. Two hours of class weekly provide a regular practice time with two logs, each a 65-pound, roughly 12-foot-long, high-density polyethylene cylinder — watertight stand-ins for traditional 500-pound cedar logs. Patented fin trainers are akin to training wheels on a bike. "These are a new thing," said Evans. "It slows down the spinning, so you can learn the skills. At the competition we met the person who started this company (Key Log Rolling founder Abby Hoeschler). "

"The trainers allows you to see success a lot quicker," said Johnson, who see the log-rolling course as a way to expand OAP's winter activities beyond snow sports. "Not everyone wants to go outside in the winter," he said.

Competition rounds take place toward the end of class. Students keep moving before, during and after with warm-ups, drills and shooting foam balls at the poolside hoops.

This is how we roll.

Intro to Log Rolling, which increases to two sections for spring semester, isn't the only unique addition to Michigan Tech PE offerings. Students can also learn to canoe, kayak and rock climb.

"The students have been asking for it," Johnson says. "We offer these activities through Outdoor Adventure Program, so it made sense to offer opportunities for students to learn how to do them."

Community classes for youth and adults are being offered beginning in mid-January. The basic requirements: a swimsuit, towel and the ability to swim 10 yards unassisted. "We'll work with each participant to get them up and rolling on the log before the end of class," said Johnson. Check out the details, including pre-registration information.

In January, February, March and April, OAP will also host open Introduction to Log Rolling sessions that are free to Michigan Tech students, $5 for Student Development Complex members and $10 for the general public. No experience necessary, but those who want to refine their skills will learn tips and tricks to be more successful.

For the latest updates, check out OAP on Facebook.