As soot particles become compact in their journey through the atmosphere, they scatter and absorb light and can affect respiratory tracts.

When carbon burns — whether it’s the charcoal on your barbeque or from a forest fire — soot is released into the atmosphere. But what goes up must come down, so what happens to soot?

When soot particles are “cloud processed” they become more compact. The particles are incorporated into cloud droplets, which leads to the water condensing and evaporating as the droplet moves higher or lower in the atmosphere. Soot that is very compact has traveled far and through clouds, which affects the particles’ optical, aerodynamic and surface properties.

To more fully understand how soot particles change in the atmosphere, researchers at Michigan Technological University used the University’s cloud chamber to simulate conditions similar to those observed at the Pico Mountain Observatory in the Azores, the Po Valley in Italy, the foothills of the Sierra Nevada mountains, the brick-making Bhaktapur region of Nepal and Mexico City. 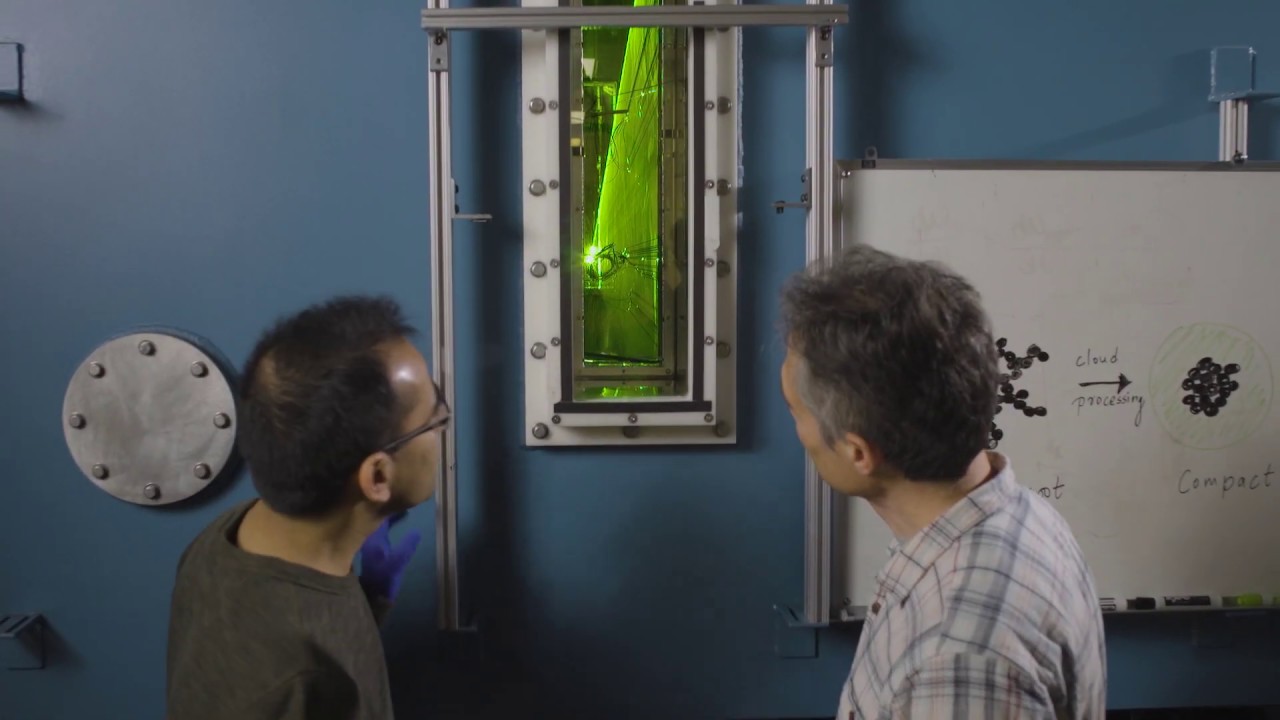 Janarjan Bhandari, a postdoctoral researcher in Atmospheric Sciences, Claudio Mazzoleni, professor of physics, and collaborators recently published their findings in the journal Scientific Reports, part of the Nature family of publications.

In their article, “Extensive Soot Compaction by Cloud Processing from Laboratory and Field Observations,” Bhandari, Mazzoleni and collaborators discuss the transformation of soot particles in clouds that changes how the black soot particles absorb light and cause atmospheric warming, as well as how they deposit in lungs and cause respiratory issues in dense urban areas.

Inside the Cloud Chamber

In order to control their experiment on the compaction of soot, Bhandari and Mazzoleni used Michigan Tech’s Pi Cloud Chamber.

“In the cloud chamber we have controlled conditions. We send in the particles, we form the cloud and we see how they evolve,” Bhandari said. “The particles change in shape. When they are emitted, they have a branch-like structure that crumbles to a compacted structure in the cloud.”

First, the researchers burn kerosene in an oil lamp under a ventilation hood. They pressurize the air with a pump to suck the smoke into the chamber. Bhandari said they collected several kinds of samples: directly from the lamp for baseline measurements, from cloud droplets in the chamber using a counter flow virtual impactor, and from residual soot in the chamber that did not interact with cloud droplets.

The experiments in the cloud chamber have enabled the researchers to understand that the longer soot particles are in the atmosphere, the more opportunities they have to become cloud-processed, and the greater the chance the particles become compacted.

“From our point of view, one of the most interesting parts is that the soot particles are absorbing sunlight because they’re black,” Mazzoleni said. “Most other atmospheric particles for the most part cool the planet because they reflect sunlight. The soot warms the planet instead.”

Michigan Tech joined the University Corporation for Atmospheric Research in a unanimous vote this fall.

Reducing the soot emitted into the atmosphere could be an important factor in delaying the worst outcomes of climate change. Additionally, many people living in densely populated cities around the world suffer from respiratory conditions related to pollution. Compacted soot can find its way deep into human lungs; removing soot from the atmosphere will clear the air, literally.