“Don’t throw a stone when no one’s watching; we don’t want this to turn into human bowling.”

To a regular group of curling newbies, such advice from an instructor would be carefully regarded. But when the would-be players are Michigan Tech alumni—who fondly remember human ice bowling, broomball and other full-contact winter traditions—the warning receives knowing looks and chuckles.

On Jan. 20, 32 Tech alumni—all employed by four of the Detroit area’s largest original equipment manufacturers (OEMs): Ford, General Motors, Fiat Chrysler and Toyota—came together at the Ferndale, Michigan-based Detroit Curling Club for an evening of beginner-curling and good-old-fashioned north-country competition.

The idea for the event came about in an interesting way.

“It began at a summer picnic,” says Ami Kipf ’02, who organized the event along with her husband, Matt ‘01 ’09. “We both work for Ford, and at last summer’s intern picnic we found ourselves meeting and talking with so many fellow Tech people—alumni and interns. I said to him, we need to make this a regular thing.”

And so they have. Ami, a buyer with Ford’s purchasing department, and Matt, a product design engineer, began spreading the word throughout Ford, as well as to alumni employed with the three other OEMs. After receiving positive feedback, they worked with Michigan Tech’s Office of Alumni Engagement to start planning a year of gatherings—a different event for each month of 2018.

Ami, who has curled several times, thought the competitive ice sport would be the perfect way to launch the program. “It’s challenging, it’s fun to play and it’s cool to watch. It brings people together.”

While the full year’s schedule has yet to be finalized, upcoming events include a pickled egg competition, charity fundraiser and lunch-and-learns where colleagues can tour departments and see what other divisions are up to.

“In companies the size of ours, we don’t often know or see each other,” Ami says. “We went to the same university, have these shared traditions, work for the same organizations, but most of us have never even met.”

As the curling bouts begin, alums—many of whom met just moments before—take to the ice in teams of four. The “leads” launch 42-pound granite curling stones from one end of the rink while the “skips” call out strategies from the other end; in between, two players act as “sweepers”—a duo responsible for furiously brushing the ice ahead of the moving stone. The sweeping provides friction, which warms the ice and allows their team’s stone to slide farther.

“To me, it’s even better than broomball,” says Sam Graham ’07. On the rink as a sweeper with a fellow alumnus from GM, Graham is one of the group’s more experienced players. A member of Blue Key during his tenure at Tech, he recalls curling and judging Winter Carnival bouts at the Calumet Drill House.

“The curling rink is made by flooding this old mining building,” Graham says. “You’re on the ice surrounded by the stone walls, looking up at these antique structures . . . just beautiful. This brings me back.”

As the competitions forges on, the cavernous arena fills with the kind of noise you would expect from a few dozen Huskies. Intense shouts of “SWEEP, SWEEP!” mingle with excited laughter over earning a single point. Across the ice, someone boasts, “We suck the least!” It’s a competitive and enthusiastic group, scheming over strategies and working up a sweat in the chill air, but never taking themselves too seriously.

This is exactly the outcome that Ami and Matt had hoped for.

“You can see the common drive that everyone has,” Ami says. “It’s a way to have fun and experience some of what the Detroit area has to offer, yes, but it’s really about strengthening our alumni networks. Ford has more than 700 Tech alumni; GM, Chrysler and Toyota have many as well. When we get together, we’re able to share our knowledge, meet new alumni and help each other assimilate and succeed.”

Whether they’re sweeping the ice or smoothing the path for fellow industry alumni, Ami and Matt are just happy to bring people together. As she says: “We’re all on the same team.” 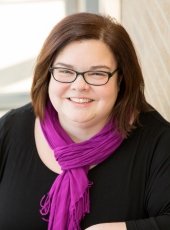