Students often learn best when they can apply what they’re learning. In the world of science, that means engaging in the practice of science. But this can be a challenge for teachers when dealing with subjects that are hard to observe—like biological evolution. The solution? Digital evolution—computer software in which populations of digital organisms evolve.

Avida is a digital evolution software used by biologists and engineers in which digital organisms replicate, mutate and compete with other digital organisms for resources in their virtual environment. Avida is said to provide a true instance of evolution, not a simulation. Recognizing that Avida could be a powerful educational tool, researchers developed an educational version of the software called Avida-ED.

Amy Lark, an assistant professor of science education at Michigan Technological University, says Avida-ED is a more user-friendly program than Avida, a research platform for conducting and analyzing experiments with self-replicating and evolving computer programs. Avida-ED allows students to observe and experiment without any specialized computer science knowledge. Lark and colleagues at Michigan State University (MSU) recently published the results of a nationwide, multiple-case study in The American Biology Teacher (DOI: 10.1525/abt.2018.80.2.74) detailing how Avida-ED curriculum was used in high school and college classrooms.

Lark’s co-authors include Robert Pennock, developer of Avida-ED and a professor of philosophy at MSU; Gail Richmond, a professor of teacher education at MSU; Louise Mead, education director of MSU’s BEACON Center for the Study of Evolution in Action; and Jim Smith, a professor of biology at MSU. Lark also co-authored a practitioner piece with Wendy Johnson, a biology teacher in Grand Rapids, Michigan, that described how Johnson implemented Avida-ED in her AP Biology class; the practitioner piece was published as a companion to the multiple-case study in the same issue of American Biology Teacher.

Start with the Basics

Teaching the basics of evolution is difficult. To assess Avida-ED's effectiveness, as well as how it might impact understanding and even accepting evolution, the researchers selected 11 instructors teaching at eight different US institutions to implement the Avida-ED program into their classrooms.

Students started with a common assessment to gauge their understanding of the scientific principles of evolution. Teachers would then provide a tutorial on Avida-ED so that students would understand how to use the software and what they were seeing on their computer screens.

Lesson plans varied widely, but each instructor would cover the concepts of variation and randomness. To apply those concepts, students could, for example, predict what an organism would look like after replication, based on the mutation rate. After observing what happened at the individual level, they could consider what happens at the population level. After that, they might design an experiment of their own.

"The goal is not to change people’s minds. The goal is to help them understand the science."Amy Lark

In using Avida-ED, students received structured lessons that targeted misconceptions—for instance, that evolution is completely random. The process shows the differences between random mutation and natural selection. As students set up experiments, they could observe that mutations are random, but selection is not.

Once the curriculum was over, students completed the same common assessment they took at the start of the course. Lark and her colleagues then compared scores. In most instances, where content scores increased, so did acceptance of evolution.

“My interest is in effectively teaching the science,” Lark says, explaining that understanding or learning about something and accepting it are not the same thing. "It’s possible not to accept evolution, but understand the process and how it works. There are also people who accept evolution, but have no idea how it works. Avida-ED is an effective tool no matter the perspective you approach it from.

Lark is working with colleagues at Michigan Tech to potentially develop a program similar to Avida-ED that could be used for teaching climate science.

In Avida-ED, digital organisms—called Avidians—are a lot like bacteria growing in a Petri dish. An Avidian’s genome is represented by a circular instruction set that consists of a sequence of 50 computer commands. Each Avidian is asexual and has a single set of unpaired chromosomes (haploid). It reproduces by making copies of its genome.

Avida-ED users get to choose the size of the grid —the Petri dish—that Avidian populations will grow in. Each cell on the grid is a potential space for one individual. The user also gets to choose the mutation rate, where offspring are placed and which of nine resources are available. 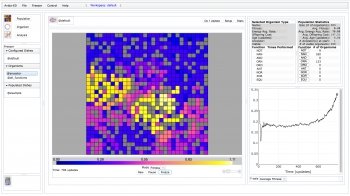