Researchers from Michigan Technological University know the smartest way to know a moose is by its brain. Specifically, skull measurements reveal information about body size, physiology and the conditions of a moose's early life. Put together, measurements through time reveal the health of a population and even changes in their environment.

For the booming moose population of Isle Royale, a key species in the world's longest running predator-prey study on the island, skulls have shrunk by about 16 percent over a 40-year period. The results were published recently in Global Change Biology (DOI: 10.1111/gcb.14015).

Sarah Hoy, a research fellow in the School of Forest Resources and Environmental Science (SFRES) at Michigan Tech, led the study.

"The conditions you're born into have a massive impact on not only how big you are but also how long you're going to live," Hoy says. "This idea isn't new—what we're trying to do is establish how climate warming is affecting this iconic, cold-adapted species. We found evidence suggesting that moose experiencing a warm first winter tended to be smaller as adults and live shorter lives."

The results from the Isle Royale moose study are significant for several reasons, especially taken in the context of nearby moose populations.

In northern Minnesota, moose populations have been halved in the past 12 years. Many ecologists consider three main factors at play: predation, disease and climate change. In particular, the influence of warmer temperatures on moose nutritional condition and moose parasites, including a fatal brain worm parasite that is spread by white-tail deer, which have moved farther north into moose territory as the climate has gotten milder.

"The moose populations in northern Minnesota have tanked," Hoy says. "Climate is considered a main driver, whether it's direct through warmer winter temperatures causing heat stress and influencing the nutritional condition of moose or indirectly by establishing more favorable habitat for white-tail deer."

As Minnesota moose have declined, the Isle Royale moose have flourished, the population growing annually by more than 20 percent for the past six years. There are also no white-tail deer to spread parasites on Isle Royale. Yet the two groups of moose do share a similar climate, so Hoy and her team wondered if the skulls of Isle Royale moose would reveal adverse impacts of climate change.

Moose—who are naturally creatures of the north—prefer the cold. Warmer winters in the Northwoods raise concerns about how animal populations will adapt to climate change.

By measuring the length, width and height of moose craniums—on 662 skulls gathered on Isle Royale by hundreds of citizen science volunteers over four decades—clear patterns emerge. First, the skulls have decreased in size and, second, the evidence suggests that moose calves experiencing a warm first winter tended to be smaller as adults and live shorter lives. Hoy's collaborator Rolf Peterson, an SFRES research professor at Michigan Tech, helped haul in some of the skulls.

"The farthest we had to hike was 20 miles," Peterson says. "These aren't changes you can see out in the field; we're looking for trends over time in the whole population."

Hoy, Peterson and their collaborator John Vucetich, a professor of ecology at Michigan Tech, suggest the trends reflect a population in transition. Part of the Isle Royale moose's transition has to do with another of the island's key species—wolves.

It seems like a paradox: a growing population with shrinking individuals and shorter lifespans. Yet when the ecological balance of food availability and predation are considered, the contradiction makes more sense. As the wolves have died off on the island—only two remained during last year's winter study—the moose population has tripled in the past decade, reaching about 1,600 in the 2017 survey. Competition for food can also contribute to malnutrition and therefore smaller moose.

"Decreasing skull size may be an early indicator of population change," Vucetich says. "We're likely looking at a population in transition, and the healthiest transition would almost certainly involve restoring wolf predation to Isle Royale."

Adapting to climate change is already tough on moose; adding the present day's imbalance in the predator-prey dynamics puts additional stress on the Isle Royale ecosystem. Drawing from six decades of data, the Isle Royale Winter Study will come out later this winter to document the impacts of population change in the island's ecosystem.

To listen to the changes in population, check out an interdisciplinary sonification project that uses sound to convey fluctuations in moose, wolf and temperature on Isle Royale: isleroyalewolf.org/sonification.

At the end of 2016, the National Park Service (NPS) published a Draft Environmental Impact Statement (DEIS) to determine how best to manage the wolves on Isle Royale. The DEIS discussed four potential courses of action. According to the document, NPS would prefer a time-limited introduction of new wolves—up to 20 to 30 wolves selected to maximize both genetic diversity and restore predation to the ecosystem. NPS estimates that the process to introduce the number of wolves identified in the plan would take between three to five years. Public review of the document concluded in mid-March, and the NPS is reviewing all comments. A final decision is expected this winter. 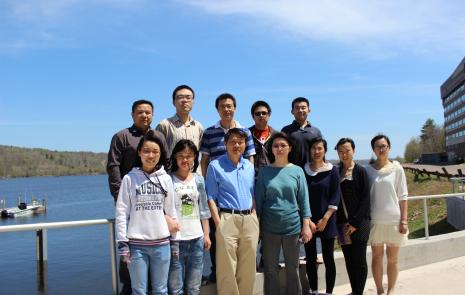