To a geologist, a rock is not just a rock, and a big crack in the ground is not what it first seems either. One such split, north of Menominee, Michigan, in the state’s Upper Peninsula, is a large crack that formed in 2010. Not known for its earthquakes, Michigan is considered aseismic, and the Menominee Crack registered the Upper Peninsula’s first recorded earthquake—measured at less than magnitude 1. The feature and its causes were mysterious.

Now, researchers from Michigan Technological University think they have identified what the feature is: a geological pop-up. The Seismological Society of America published the study in their journal Seismological Research Letters.  The unusual structure is often found at the base of quarries or where glaciers have recently receded. The team, led by Wayne Pennington, dean of the College of Engineering at Michigan Tech, says the Menominee Crack is a one-of-a-kind feature as far as they can tell.

Early in the morning on October 4, 2010, people living near Menominee heard a loud noise and felt shaking. In the woods nearby, close to where a large white pine had recently been blown over in a windstorm—a large crack had split the earth.

Pennington, on his way back to Michigan Tech from a conference, decided to investigate. Still in his business clothes, he used a pad of paper from the hotel, used his phone to gather GPS data and paced off measurements in his dress shoes. The crack was 361 feet long, up to two feet wide and as deep as four or five feet in some spots. But what struck him most was the 6-foot high ridge beneath the crack; it had appeared at the same time as the crack.

“The crack itself was not as important to note as the ridge,” Pennington says, explaining that the ridge indicated a deeper structure. And that underlying structure is a pop-up, sometimes called an A-tent because of the shape it forms.

Pennington and his team wanted to confirm that it was a pop-up, so they ran seismic refraction tests. The technique measures the speed of sound as it travels within layers of the earth, and the wave’s path changes based on rocks types, fractures and other unseen geologic features. In this case, the seismologists used a sledgehammer to strike a large metal ball lying on the ground, and captured the resulting sound waves.

In broken rock, sound travels faster as it moves parallel to cracks in the rock, and slower when it moves perpendicular to the cracks and has to travel across the fractures. The scientists found a pattern of refraction speeds that seemed to be consistent with the intense bending and then fracturing of the brittle limestone of a pop-up feature. 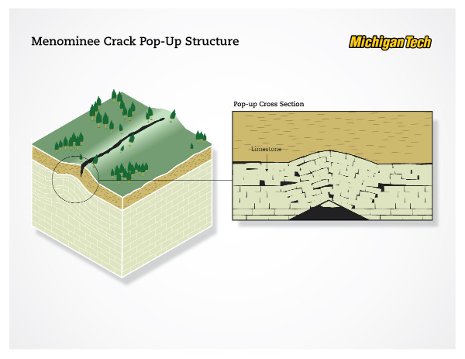 Not Quarries, Not Ice

Given the size, shape and features of the Menominee Crack, it certainly appears to be a pop-up structure. However, the cause of the feature is still unknown.

Usually, pop-ups form where downward pressure is lessened, most commonly at quarries and glacial zones where the overlying rock or ice has been removed.

“There are no nearby quarries, however,” Pennington says, adding that the glaciers left more than 11,000 years ago. “There was a large tree that had been removed after it fell over and the timing certainly provides an interesting coincidence.”

He admits the cause of the crack remains a mystery—and a puzzling one in an aseismic zone—but it also makes the feature unique.

“We wanted to look into the crack because we could not find information in the literature on pop-up structures forming outside specific areas,” Pennington says. “As far as we can tell, this is a one-of-a-kind event; but in case it is not, we wanted the information about it to be available for other investigators.”