James A. Mitchell '65 (Chemistry) has again been selected by his peers for inclusion in the 21st Edition of Best Lawyers in America in the practice areas of Litigation– Intellectual Property Law and Patent and Trademark Law.

Tom Paschetto '77 (Forestry) is in his sixteenth year as project manager with Promosis, Inc. in Marblehead, MA, and is celebrating his one-year wedding anniversary with his wife, Wendy.

William Hensel '75 (Forestry): "Because of my Tech education, I was fortunate to have a successful twenty-three-year professional forestry career with a large paper company based in Wisconsin. I served as chairman of the Society of American Foresters in 1987. I served in the military from 1968–1971. Upon returning to school, I earned a master's degree from University of Idaho in timber harvesting. I especially want to share my gratitude for the late Dr. Gene Hesterberg. He was a fine leader and gentleman—the best! Today I am a PGA golf professional working in the Tampa area and enjoying keeping out of the trees—a change from my forestry career, which always kept me deep in the forest.

Tim Foss '75 (Forestry) retired from the US Forest Service after a thirty-nine-year career. He served as trails/ wilderness/OHV manager, winter recreation supervisor, presale forester, and firefighter in both the Gifford Pinchot and Okanogan-Wenatchee National Forests. He and his wife, Hilary, live in Cle Elum, WA, where he remains active as a volunteer and musician.

William Cormack '84 (Mechanical Engineering) and his wife of twenty-eight years, Maureen, are employed by the US Department of State overseas. Bill is a construction engineer who supervises the design and construction of US embassies and consulates and overseas housing for American diplomats and their families. He is currently assigned to the US Embassy in Islamabad, Pakistan. Maureen is a senior Foreign Service officer in the US Diplomatic Corps and is currently the ambassador of the United States to the Republic of Bosnia and Herzegovina. Maureen resides in Sarajevo. The Cormacks have three college-aged children and maintain their residence in Fairfax, VA.

Shawn '82 (Computer Science) and Jim '81 Rathbun (Civil Engineering) completed a cross-country bicycle ride from Washington to Maine in the summer of 2014.

Peter Sajdak '82 (Chemical Engineering) was one of more than seventy Couch Pit University (CPU) members, family, and invited guests who attended the 2014 CPU dinner and new-member induction. This was the twenty-third meeting of the prestigious society made up of premier papermakers, both active and retired, who are nominated and elected by their peers.

Daniel Cavasin '87 (Metallurgical Engineering) has been promoted to fellow on the technical staff of Advanced Micro Devices (AMD) in Austin, TX. He has been involved in development of AMD's Accelerated Processing Units (APUs) for several years, the last five of which have been focused exclusively on the APUs used in today's latest generation of game consoles.

Timothy Jenkins '89 '08 (Mechanical Engineering) received the Charles and Sue Ragan Gelet Excellence in Teaching Award in Engineering for the 2013–2014 academic year. Tim has been an assistant professor in Design Engineering Technology at Trine University in Angola, IN, since August 2012. He received the award in his first year of eligibility.

Scott Stevens '81 (Forestry): "After thirty-one years of federal law enforcement, I retired on May 31, 2014. I started working for the National Park Service as a law enforcement ranger in 1983, and after twenty years I switched over to the Bureau of Land Management for two years as a chief ranger. I finished the last nine years of my career with the US Fish and Wildlife Service as the regional law enforcement chief in the Pacific Southwest Regional Office."

Jim Niemczyk '82 (Mechanical Engineering) has been promoted to president and general manager of American Panel Corporation (APC). Jim will be responsible for all business activities at APC, which is the world's leading manufacturer of custom-designed display products for aviation, rugged ground vehicles, and shipboard applications. APC supplies cockpit displays for nearly every military aircraft in the US and NATO fleet as well as Abrams tanks and Stryker ground vehicles.

Scott Hudson '96 (Civil Engineering) has been named secretary for Committee 12– Rail Transit by the American Railway Engineering and Maintenance-of-Way Association (AREMA). This committee is responsible for the development and publication of information regarding light and heavy rail transit systems and their design, construction, and rehabilitation—in particular Chapter 12 of AREMA's Manual for Railway Engineering.

Christi (Chapman) Bellmore '99 (Biological Sciences) and Nick are thrilled to announce the birth of their son, Colton Nicholas, on January 11, 2014.

Matthew H. Meyer '98 (Metallurgical and Materials Engineering) is now the manager of the Chemical and Metallurgical Laboratory for the Kohler Company located in Kohler, WI. Matthew, Jennifer, and their four daughters live in Sheboygan.

Gretchen and Eric Dalquist '04 (Computer Science) welcomed their son, Hendrik Lloyd Dalquist, on June 22, 2014. Hendrik was 9 pounds, 12 ounces, and 22.5 inches long. His older sister Elsa is very excited to have a baby brother.

Carlin '05 (Civil Engineering) and Jake Grundemann '05 (Engineering Technology) proudly announce the birth of their son, Levi Grundemann, born March 6, 2014. He already loves the fresh outdoor air and may one day be a Husky, too!

Andrea Dreyer Zuehlk '01 (Mechanical Engineering) and Matt Zuehlk are proud to announce the birth of their son, Max Bennett Zuehlk, on August 12, 2014. Big brother Evan is excited to show him the ropes.

Paul Brandes '04 (Geology): "In 2014, I was named Employee of the Year (also known as the MVP Award) at the Texas Commission on Environmental Quality Region 12 Office here in Houston. The office has approximately 200 employees in several divisions, including air (where I work), water, waste, and emergency response activities. Included in the award are a plaque, gift card, special parking place, and most importantly, eight hours of leave, which I'll be using to attend Winter Carnival in February. How appropriate that I received this award on the day I happened to be wearing a Michigan Tech shirt and lanyard!"

On August 30, 2014, Brittany Kelly '09 (Mathematics, Delta Zeta sorority) and Matthew Osborne '09 (Industrial Technology, Sigma Phi Epsilon fraternity) were engaged. They will be married in June of 2015.

Roxane Gay '09 (Rhetoric and Technical Communication) wrote and published a book, Bad Feminist, which made The Atlantic's "The Best Book I Read This Year" list.

Stephanie (Garbacik) Sullivan '10 (Environmental Engineering) and Mike Sullivan were married on May 31, 2014, and are looking forward to celebrating their one-year anniversary in Kauai.

Scott Nelson '10 (Materials Science and Engineering) and Megan Knudstrup '10 (Civil Engineering) were married in Carmel, IN, on October 4, 2014. Scott and Megan met as members of the Huskies Pep Band and were both heavily involved in the band throughout their time at Tech.

Nick Laurila '10 (Business Administration) won a gold medal with the US Women's National U-18 team as the video coordinator.

Andrea Walvatne '12 (Mechanical Engineering) and Kristopher Falasco '13 (Chemical Engineering) met in the Pep Band and Wind Symphony. Their Tech-themed October 18, 2014, wedding included many fellow Tech grads. They entered to the Pep Band entrance song and guests enjoyed pasties and KBC beverages. Even their wedding bands are rose gold—a mixture of copper and gold, to reflect the Copper Country.

David Heiden '10 and Stephanie Lindstrom '10 (both Biomedical Engineering) were married on September 13, 2014, in Nisswa, MN. Stephanie is employed by Medtronic in Minneapolis as an MDR specialist, and David is a field engineer for Beckman Coulter in Minneapolis. The couple resides in White Bear Lake.

Angela Elizabeth Hoffman '11 (Psychology) and Benjamin James Bouman '10 (Biomedical Engineering) were engaged in September 2014. They currently reside in Ann Arbor and plan to celebrate their marriage in June of 2015.

Thomas '12 (Mechanical Engineering) and Allison (Kapala) Stutts '12 (Mathematics) were married on August 2. Allison is an actuarial analyst at Mercer, and Tom is a design engineer at General Electric Company. They reside in Louisville, KY, with their chocolate lab, Euler.

This April, Michigan Tech's School of Business and Economics (SBE) and the Applied Portfolio Management Program (APMP) held a ceremony to remember and honor the late James Trethewey '67.

Throughout his career, Trethewey never forgot his alma mater, serving on the Advisory Board for the SBE. University President Glenn Mroz reflected on the importance of family to Jim—a family that included his wife, children, and grandchildren, as well as his Michigan Tech family.

SBE Dean Gene Klippel highlighted Jim's willingness to serve Tech and the School in a variety of roles.

"The wording on the plaque to honor Jim reflected his philosophy—‘Make it a great day,'" says Dean Johnson, the James and Delores Trethewey Professor in the School of Business and Economics.

"Jim was always smiling, always upbeat, and he encouraged all of us, faculty and students, to conduct ourselves that way." Johnson says the plaque will be placed in the Trading Room "as a reminder to APMP students of their responsibility to not only improve themselves each day but to make a positive impact in the lives of others around them." 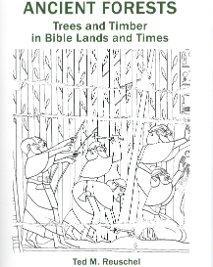 Ted Reuschel ’64 spent ten years following his thirty-seven-year career with the Michigan DNR gathering and organizing material about trees to draft his book—an in-depth yet easy-reading review of ancient uses of trees and wood. In it, Reuschel writes about some of the most unusual trees in the world, focusing on the ancient “cradle of civilization” to see how trees were cut, moved, and fashioned into useful products. He talks about the famous cedars of Lebanon and the earliest use, abuse, protection, and management of Mediterranean-area forests. Reuschel’s book is available for purchase at www.amazon.com.