Troy Bouman reaches over, presses play, and the loudspeaker sitting on the desk starts playing the university fight song. But this is no ordinary loudspeaker. This is a carbon nanotube transducer—and it makes sound with heat.

Bouman and Mahsa Asgarisabet, both graduate students at Michigan Technological University, recently won a Best of Show Award at SAE International’s Noise and Vibration Conference and Exhibition 2015 for their acoustic research on carbon nanotube speakers. They work with Andrew Barnard, an assistant professor of mechanical engineering at Michigan Tech, to tease out the fundamental physics of these unusual loudspeakers. 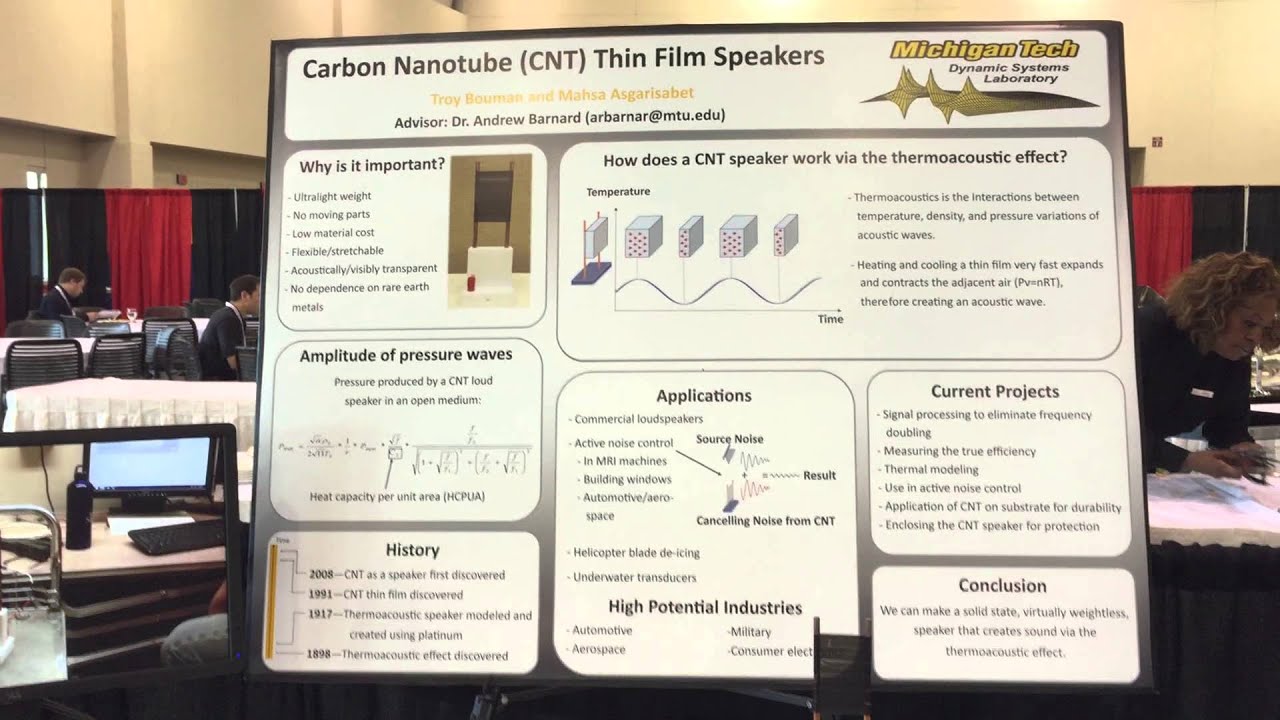 While still a fledgling technology, the potential applications are nearly endless. Everything from de-icing helicopter blades to making lighter loudspeakers to doubling as a car speaker and heating filament for back windshield defrosters.

The freestanding speaker itself is rather humble. In fact, it’s a bit flimsy. A Teflon base props up two copper rods, and what seems like a see-through black cloth stretches between them.

“A little wind gust across them, and they would just blow away,” Barnard says. “But you could shake them as much as you want—since they have such low mass, there is virtually no inertia.”

The material is strong side to side, because what the naked eye can’t see is the collection of black nanotubes that make up that thin film.

The nanotubes are straw-like structures with walls only one carbon atom-thick and they can heat up and cool down up to 100,000 times each second. By comparison, a platinum sheet about 700 nanometers thick can only heat up and cool down about 16 times each second. The heating and cooling of the carbon nanotubes causes the adjacent air to expand and contract. That pushes air molecules around and creates sound waves.

“Traditional speakers use a moving coil, and that’s how they create sound waves,” Bouman says. “There are completely different physics behind carbon nanotube speakers.”

And because of these differences, the nearly weightless carbon nanotube speakers produce sound in a way that isn’t initially understood by our ears. Bouman’s research focuses on processing the sound waves to make them more intelligible. Take a listen.

To date, most research on carbon nanotubes has been on the materials side. Carbon nanotube speakers were discovered accidently in 2008, showing that the idea was viable. As mechanical engineers studying acoustics, Barnard, Bouman and Asgarisabet are refining the technology.

“They are very light weight and have no moving parts,” Asgarisabet says, which is ideal for her work in active noise control, where the carbon nanotube films could cancel out engine noise in airplanes or road noise in cars. But first, she says, “I want to focus first on getting a good thermal model of the speakers.”

Having an accurate model, Bouman adds, is a reflection of understanding the carbon nanotube loudspeakers themselves. The modeling work he and Asgarisabet are doing lays down the foundation to build up new applications for the technology.

While a lot of research remains on sorting out the underlying physics of carbon nanotube speakers, being able to use both the heat and sound properties makes them versatile. The thinness and weightlessness is also appealing.

“They’re basically conformable speakers,” Barnard says. The thin film could be draped over dashboards, windows, walls, seats and maybe even clothing. To get the speakers to that point, Barnard and his students will continue refining the technology’s efficiency and ruggedness, one carbon nanotube thin-film at a time.