Connecting the Dots With a Golden-winged Warbler

Catching a Golden-winged Warbler sounds like a mythical quest. The tiny bird is quite real, though, and a number of researchers track the species. The warblers migrate from the North Woods of the Midwest to Central America every year, and researchers put bands on the legs of a handful to keep tabs on them. Now, for the first time, the same Golden-winged Warbler has been caught at both a migration hotspot and in his wintering grounds.

Catching a warbler that someone else banded is “like a one in a million long shot,” says Amber Roth, a Michigan Technological University researcher who netted the bird in Nicaragua. “It’s a needle in the haystack for sure, especially for this species.”

Golden-winged Warblers are forest birds, and unlike ducks and other migratory fowl that are hunted, they have never had a band return like this.

Roth says the warblers are also unique among forest birds: They have been proposed for listing under the Endangered Species Act; they are territorial both nesting and wintering; they may be more greatly impacted by climate change; and they hybridize with Blue-winged Warblers. Plus, this particular Golden-winged Warbler that Roth caught is unique among his feathered kin. Thanks to Roth and her colleagues, he is now sporting a miniature geolocator, a device that could illuminate his whole migratory path. 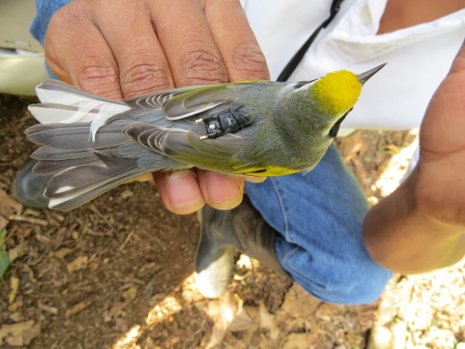 While Golden-winged Warblers are not fairytale creatures, the fact that different researchers caught the same bird is a dream come true.

“This is one of the things that people in our field sit and talk and dream about, ‘Wouldn’t it be cool if someone caught one of these birds someday?’” Roth says, admitting she was excited when she and her fellow researchers caught the warbler in Nicaragua on January 25 of this year at Reserva El Jaguar, a private forest reserve which is the only Golden-winged Warbler reserve in the world. James Marshall of Rockford University initially banded the bird on September 2, 2014, at the Severson Dells Forest Preserve in Illinois.

The USGS Bird Banding Lab keeps all US bird band records and tracks new encounters with these banded birds, including the Golden-winged Warbler caught by Roth and Marshall.

Marshall works with Rockford University undergraduates on a number of research projects involving birds, including how migrant birds help spread invasive bush honeysuckles. All of the projects involved banding birds, but none were explicitly looking for Golden-winged Warblers.

“I saw a lot of golden-wings come through in the spring, but I had never caught one in Illinois,” Marshall says. On the day the mystical Nicaraguan bird was caught, he was the fifth of six. “I was already excited to catch so many; I didn’t realize just how exciting it would be.”

And just one warbler can illustrate the importance of migratory stop-over sites to birds of concern. The Severson Dells, where the Golden-winged Warbler was banded, is one such site and is a great place for hands-on education. Bridging nature and people is what Don Miller, director of nature education and research at the Severson Dells Nature Center, does every day.

"Our mission is to connect people to nature through education and research,” Miller says, explaining that Marshall's banding work had an audience. The center brings elementary school students out to see the banding and learn about migration. "It's all about the wonder and awe. Sometimes — like with this warbler — it takes something out of the ordinary to catch other people's attention."

Green spaces like the Severson Dells are crucial for migrating birds. Golden-winged Warblers prefer shrubby nesting grounds, a habitat they share with hunted species like ruffed grouse and woodcock, but they forage in the trees.

“Those forest islands tend to be magnets for birds on migrations,” says Roth, who also researches forest bird migration patterns and conservation around the Great Lakes. She says with the Golden-winged Warbler’s northern story, there is only one piece missing. “Where did this guy breed?” she asks. “It would be great to get the third point, which would be his home territory on the breeding grounds, likely somewhere in the western Great Lakes.” 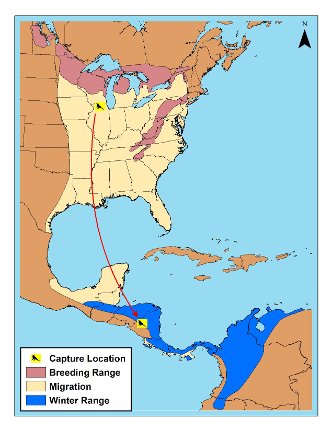 The geolocator placed on the back of the bird can help piece together that information if the warbler can be recaptured in Nicaragua next winter. This is collaborative work among Roth and collaborators Liliana Chavarria-Duriaux and Georges Duriaux at El Jaguar Reserve, Henry Streby at Stanford University, Jeff Larkin at Indiana University of Pennsylvania, Curtis Smalling at Audubon North Carolina and Andrew Rothman at American Bird Conservancy. Roth also leads an initiative to better track migratory birds around the Great Lakes. Connecting the dots between the breeding grounds, migration stop-overs and wintering grounds is important because the numbers of Golden-winged warblers are sharply declining.

“You’re losing a lot of birds every year,” Roth says. “That’s why you see sites with hundreds of birds just go to zero in several years. They just can’t replace their losses fast enough.”

Mike Ward, an avian ecologist at the University of Illinois at Urbana-Champaign, agrees that tracing the warbler’s migration is crucial, and current research emphasizes the full life cycle of birds in the northern and southern habitats.

“Golden-winged Warblers are one of the top species in terms of conservation in the Midwest,” he says. “When conservationists develop strategies to stop the decline of this species, they will need to not only think about habitat and threats in the upper Midwest but threats in Central America.”

To turn the population trend around, researchers are looking into the impacts of climate change, habitat loss, migration hazards and hybridization with Blue-winged Warblers. Some of those findings now hinge on this Golden-winged Warbler and his migration story.

“That’s why those of us who study this bird find it so fascinating, because there are so many different issues that come into play,” Roth says, marveling that one little Golden-winged Warbler will help connect the dots not only on his own journey, but connect research threads and people across the Western Hemisphere.