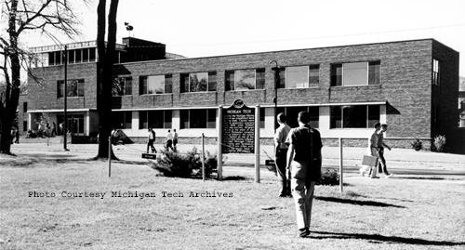 The need for housing auxiliary services for the campus in one location became apparent after World War II.  The planning for the Memorial Union began in the summer of 1947.  The Alumni Association started the fund drive and the Alumni Foundation was formed to handle the finances.  The alumni, reaching out to former students and the community, conducted a successful drive.  On February 24, 1949, the Lode reported, "Union Fund Drive Nears Goal."  The goal was $300,000 and $200,000 had been raised.  The Board of Trustees decided that the Alumni Association had come close enough to its goal to justify the project and on June 6, 1950, approved borrowing 1.3 million dollars for construction.  The Memorial Union opened two years later on May 5, 1952.

A number of additions and improvements have been made to the Memorial Union since it first opened.

1989—A large expansion added a food court and extra conference rooms.  Renovations also repaired parts of the building which were weathered due to wear throughout the years.

2002—The 2nd floor balcony was added and the Keweenaw Commons received a facelift.

2010—The Memorial Union Food Court was updated to make it more welcoming and more efficient and give it a more enticing menu.

2014—The John Edgar McAllister Welcome Center, consisting of a 3,000 square foot addition on the south side of the building and the remodeling of another 1,500 square feet of the main level, created a new location for the Admissions office to host campus visitors.

The Food Court was refreshed and renamed the North Coast Grill to serve more local, fresh and diverse fare.

A new War Memorial Wall to honor Michigan Tech alumni who gave their lives in service during the Vietnam War and subsequent conflicts was dedicated on November 11.