Project Overview
Our team will design, build, and test a system to extract water from gypsum, demonstrating an Earth version as a step toward a Mars version ultimately needed. 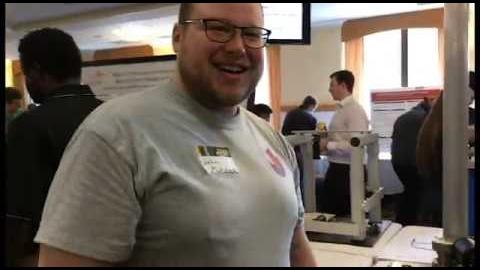 Project Overview
Our project goal is to develop a new part handling system that requires less time to changeover across six-part numbers while staying in the original machine’s footprint. The handling system transports nuts and washers from separate vibratory bowls, aligns them, and brings them to a hydraulic press to be swaged together. The current system’s track is made of spring steel and swapped for each part configuration; this requires numerous adjustments resulting in an unnecessary five-hour changeover time. Our solution employs two conveyors with adjustable guide rails and a gravity slide to transport these parts. With the new design, the machine’s footprint will stay the same, changeovers will be easily repeatable, and the changeover time will be drastically reduced.

Project Overview
The introduction of the electric vehicle along with the reduced need for the consumer to access the under hood components themselves has created the opportunity to redesign how the hood is attached. Our team was tasked with the design problem to create a fixed hood that would no longer use the hinging and latching mechanism in order to save weight and manufacturing costs. By fixing the hood to the frame of the vehicle, it could also be used as a structural member in the event of a frontal collision. Our team has designed sets of brackets that will use a leaf spring method to apply a clamping force to hold down the back of the hood while the front will be bolted through access point in the grille of the vehicle. This new design will be fully removable to allow access to larger under hood components, while also having access ports to fill fluids such as oil and windshield washer fluid without the need to remove the hood. The current scope of the project is focusing on redesigning the attachment points on the Chrysler Pacifica, but it could be implemented on other vehicles in the future.

Project Overview
Our goal is to help first responders better handle active threat situations by researching and prototyping a solution. 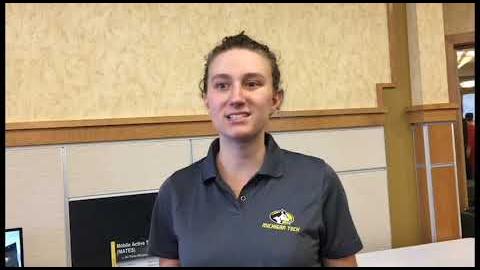 Project Overview
DTE Energy utilizes a series of four Electrostatic Precipitators (ESPs) to remove ash particulates from flue gasses. Our team is creating a new device and method to inspect units and identify broken electrodes that can reduce unit efficiency. The team’s goal was to replace and improve upon the current inspection process requiring timely setup and large inspection crews. By utilizing a camera equipped crawling robot, the team has created a functional prototype that can be used to identify broken electrodes. The created prototype can operate without the need for long setup times and can be operated with a crew of two people. The team will make further recommendations to improve the device, allowing for inspection of more ESP area at once.

Sorting of Bar Ends and Slugs from Hot-Formed

Project Overview
Using modern heatsink designs, computational fluid dynamics, and elementary thermodynamic equations, our team developed a design tool for TARDEC. TARDEC will utilize the design tool to select a final heatsink configuration for their air cooled inverter. Our team manufactured and tested a heatsink to validate the data presented on the design tool.

Project Overview
We were tasked with designing and manufacturing a fixture to accurately measure the lash between the ball screw and ball nut of the steering mechanism in vehicles.

Project Overview
Our team has been engaged to design an automatic case sealer for fully overlapped (FOL) cartons using water activated tape for Fapco, Inc. Currently, the production staff uses two different methods to close FOL boxes. The first is a manual machine to activate and cut custom tape lengths and apply the tape by hand. The second method for closing the carton includes stapling the carton before a label is applied to the finished package. The team looks to improve this process by using a conveyor system in conjunction with a water-activated tape (WAT) mechanism to seal cartons. In addition, the design will accommodate multiple different carton sizes to increase versatility of the machine, which in turn will increase production rates. 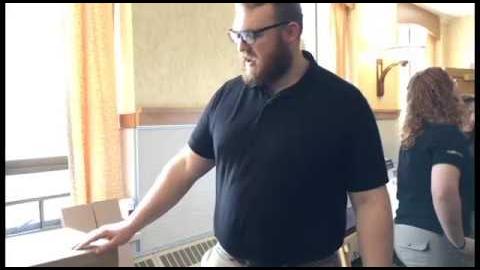 Project Overview
A software tool that will evaluate the fuel economy impact of mass on a vehicle. The purpose of the fuel economy impact tool is to instantaneously evaluate the impact of mass of a vehicle on fuel economy and energy usage. While the initial project scope focuses on the additional mass of lug nuts, the program calculates the effects of various additional masses, stationary or rotating. Through AmeSim simulations and SolidWorks models, it was possible to correlate basic relationships between mass and energy usage of a vehicle over various drive profiles, which serve as the basis for a graphical user interface within Microsoft Excel. The user is able to select a variety of parameters, including vehicle and lug nut mass and drive profiles.

Project Overview
For our project, we intend to identify an off-the-shelf load sensor for the specified loading range. Then we will integrate it into the crane tension-compression measurements and design a calibrator for load-cell calibration.

Project Overview
Our team will develop an analytical model to predict thrust forces of a belt drive power steering system.

Project Overview
Our team will design and prototype a fixed hood for IC engine, PHEV, BEV vehicle architectures. Our goal is to take advantage of the many potential benefits (i.e., structure, pedestrian protection, over slam clearance, aerodynamics, styling, cost, etc.) while minimizing detractors (i.e., maintenance and ease of use).

Project Overview
In order to reduce downtime and extend tool life, our project is to design and implement a system that can automatically index our customer’s cutting tool. Using a visual feedback system, the machine operator can now interface with the device and allow the system to index it. Once the cycle is complete, the visual feedback will inform the user and the operator can safely run the machine.

Project Overview
Our team built a pneumatic device that can be plumbed to the inlet of a machine and determine the total quantity of compressed air that the machine uses during a predetermined period of time. The goal is to have the end user apply this totalizer and determine compressed air usage of a system. By quantifying air usage of an apparatus employing current components and the usage of the same apparatus employing higher quality components, potential dollar savings can be clearly demonstrated. 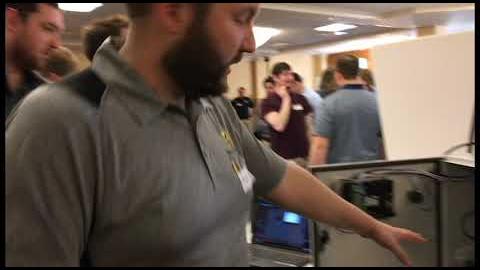 Project Overview
Our team is designing and prototyping a mechanical elevator to be installed in a bird watching tower for the Keweenaw Bay Indian Community.

Project Overview
Our team will redesign the current exhaust system on the John Deere Gator XUV835. The current system on the John Deere Gator XUV835 was designed for a previous Gator model in 2010; since this design, customer expectations and needs have changed. The new design improves on overall weight of the system, complexity, exhaust noise level, sound quality, and maintain or improve upon the rear hitch accessibility. 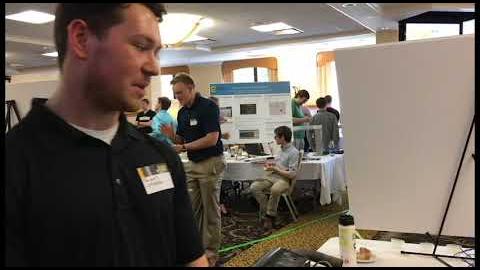 Project Overview
Our team will design and prototype a red laser inspection device and accompanying process for the quality of wheel nut internal threads for MacLean-Fogg Component Solutions—Royal Oak. The problem is that current automated inspection processes lack the capability to locate and sort out several common defects seen due to machining. MacLean-Fogg would like to end third-party defect hand sorting and integrate automated laser inspection onto their line(s).

Project Overview
Tasked with designing and prototyping a personnel location system usable during active threat situations, our team created a remotely operated device that would analyze the environment around it and relay it to the operator. Combustible gas, carbon monoxide, oxygen, smoke, and temperature sensors are assembled on the device along with a cell phone, which is used to give the user “eyes” from the camera when driving the device.

Project Overview
MacLean-Fogg Component Solutions is a leading manufacturer of fastener components, engineered components, engineered plastics, and linkage and suspension components for automotive, heavy truck, and other diverse industries. The MacLean-Fogg-Metform facility focuses on horizontal hot forging, machining, and light assembly of components primarily for transportation industries; one of which is the wheel nut. These assemblies are comprised of a washer and a nut, which are staked together in an assembly cell. Currently, the washers are taken to an offline Eddy Current Tester (ECT) before staking, which inspects the parts for cracking that may lead to failure. Washers flow into an indexing table, are rotated and tested by the ECT, and based on the result, are passed or failed. The purpose of this project was to eliminate handling between inspection and assembly by integrating inspection into the assembly process. A smaller version of the existing indexing table was designed, so that it can fit in-line with the assembly cell, along with the ECT.