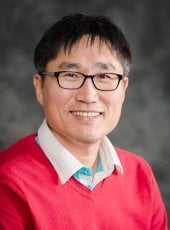 Dr. Chang Kyoung (CK) Choi is an associate professor of Mechanical Engineering-Engineering Mechanics at Michigan Technological University. Prior to this appointment in 2009, he was a post-doctoral researcher at Oak Ridge National Laboratory (ORNL) from Jan. 2008 to Dec. 2008. He received his BS and MS in Mechanical Engineering from Chung-ang University in 1999 and 2001, respectively. He received a PhD in Mechanical Engineering from the University of Tennessee-Knoxville in 2007. Right after his doctoral graduation, he continued and expanded his research areas by working in three different fields of Mechanical Engr., Biomedical, Engr., and Biology as a post-doc in UT-Knoxville. His research interests are microscale heat transfer, micro-fluidics, micro-encapsulation, micro-/nano-fabrications, opto-electrical cellular sensing, multi-scale interface phenomena, and chemotaxis. He is particularly interested in developing a versatile and highly capable multimodality imaging system coupled with the culture platform in order to make in vitro data collection even more comprehensive. He is currently a chair of visualization technical committee (K-22) in the heat transfer division of American Society of Mechanical Engineering (ASME) and a topic organizer of Photogallery-heat transfer visualization in the ASME-IMECE and the ASME Summer Heat Transfer Conference.