Dr. Bhakta Rath '58 – Giving Back to His Country and His Alma Mater 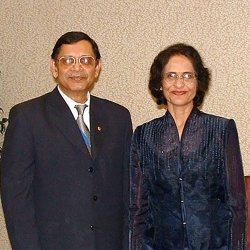 When Bhakta Rath arrived in Houghton on January 2, 1956, from Cuttack, India, he had never experienced weather colder than 60 degrees, and his warmest clothes were a double-breasted suit and a light overcoat. “I learned they would be hopelessly useless,” Rath remembers with a chuckle.

His wardrobe wasn’t the only thing that needed an overhaul. When Rath met with his advisor, he found that his bachelor’s degree in math, physics, and chemistry wasn’t much preparation for a Michigan Tech master’s in metallurgical engineering. With no undergraduate metallurgy courses to his credit and precious little engineering—he didn’t even know how to use a slide rule—Rath faced a huge challenge. To complete his master’s, he would essentially have to earn a second bachelor’s degree. That wouldn’t have been so bad, except it would take seven years, and he had promised his mother in India that he’d be home in two. His advisor offered a solution: he could take all the courses in that time without requiring him to take the prerequisites.

“I decided I would take the challenge,” Rath said. “I was a young man—healthy, strong, and stupid.”

He had a bit of help. Metallurgy instructor Harold Meese, who would become legendary among generations of students as Dean Meese, approached Rath shortly after he enrolled. “In his hands, he held the 1948 edition of The Metals Handbook, and he assured me that this book would become my new bible. I cannot tell you how right he was,” says Rath. Fueled by relentless determination, Rath completed nearly 70 courses, conducted research, and wrote a thesis, all within two years. “I didn’t sleep much,” he remembers.

Then his interests pulled him in another direction. That 1958 MS in Metallurgical Engineering taught him everything he’d ever need to know about, for example, making steel, but it also piqued his interest in understanding the fundamentals of matter. So, with his mother’s blessing, he enrolled in a doctoral program at the Illinois Institute of Technology and went on to teach at Washington State University.

“Then I got interested in conducting research,” he says, which led him to accept R&D positions at US Steel and McDonnell Douglas. There he faced an ultimatum. “Unbeknownst to me, I had been tasked to solve a classified engineering problem,” Rath says. “The vice president came running and told me I needed to be a US citizen to get a security clearance and work on this project.” Rath balked; he was happy with his status as a permanent resident. “But I was in the middle of this very interesting challenge, and I wanted to see it through,” he remembers. So he applied for and received US citizenship, stayed on the job, and solved the problem.

A few years later, Rath attracted the attention of the Naval Research Lab (NRL), which recruited him to head a research team in 1976. “I was intrigued with the environment of the lab and fell in love with the work we were doing,” he says. He spent 41 years at the NRL, the last 31 as head of research in the Materials Science and Component Technology Research Directorate.

By the time he retired in 2017, Rath had led a team of more than 750 scientists and engineers (including Nobel laureates), managed a $260-million-plus budget, and played a role in countless engineering endeavors, including Skylab, explosives detection, and many other projects benefiting the US Navy, the Department of Defense, and the nation. He had also served as president of ASM, been named a fellow of the National Academy of Engineering and the American Association for the Advancement of Science, and, among his many honors, received the Padma Bhushan, one of India’s highest civilian awards. The NRL has named a room in his honor, and he has received three honorary doctorates, including one from Michigan Tech.

When he looks back on his professional life, Rath’s primary emotion is gratitude. “I like to give back to those from whom I have benefited,” he says. That includes his adopted country as well as his alma mater. Thus, when he and his late wife, Sushama, decided to endow three research awards, they chose Michigan Tech as a beneficiary, along with the Illinois Institute of Technology and the Colorado School of Mines.

Founded in 2010, the Bhakta Rath Research Award provides over $2,000 to a graduating Michigan Tech PhD student and faculty advisor “who have done something valuable for American industry and society.” Specifically, the award encourages faculty and doctoral students to conduct research that will meet the nation’s needs and the challenges of emerging technologies.

“I’ve spent the last 64 years in this country, and I owe it something in return,” says Rath. “I’m like an old farmer. I have to put something back into the soil.” 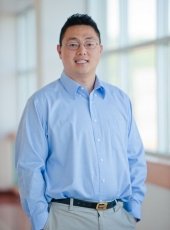 "Receiving the Rath Award certainly reinforces the importance of the research PhD candidate Ameya Narkar and I have been conducting. In addition, it reinforces the collaborative nature of our research, the relationship we have established, and how I approach my role as a teacher and mentor.

I try to give my students the freedom to explore and even make mistakes. I usually let them decide how they should plan their experiments. I also set high expectations, and I always challenge them to do more. If the student is willing to improve and grow, he or she will become an independent researcher who can think on his or her own.

This award has also helped to establish Ameya as a legitimate researcher and provides significant encouragement for him to continue to undertake research projects that will benefit mankind."

Dr. Lee is an associate professor in the Department of Biomedical Engineering.