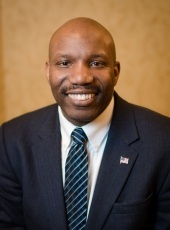 Derhun Sanders graduated in 1997 with a bachelor's of science degree in biological sciences. He is the Government Liaison and Congressional Lead for the U.S. Army Ground Vehicle Systems Center (GVSC). Sanders was the 1996 recipient of Michigan Tech's Percy Julian Award given to an undergraduate student leader who is active in the promotion of diversity, social equality or racial/ethnic and cultural understanding. Sanders has served on the Tech Alumni Association board of directors and the board of the Black Alumni Association. In 2007, Sanders was the Keynote Speaker at the 35th Anniversary Celebration of Michigan Tech's Summer Youth Program.