Michigan Tech Winter Carnival began back in 1922, when the Student Organization presented a one-night Ice Carnival. The show consisted of circus-style acts, with students dressed up in animal costumes. There were also bands, other student performances, and speed and figure-skating contests. The show was staged at the old Amphidrome, now the site of Dee Stadium, on the downtown Houghton waterfront and the birthplace of professional hockey.

This circus theme continued for the next two years, and while a far cry from the internationally known six-day extravaganza it would become, it was so enthusiastically received it was decided to make Ice Carnival an annual event.

Do you want to know more about Blue Key, Winter Carnival, and ways that you can be part of Michigan Tech’s most beloved tradition? Reach out to us at:
bluekey@mtu.edu

Our campus, community, and visitors—people like you—are what make Winter Carnival possible year after year. Your patronage keeps the tradition alive. Thank you! 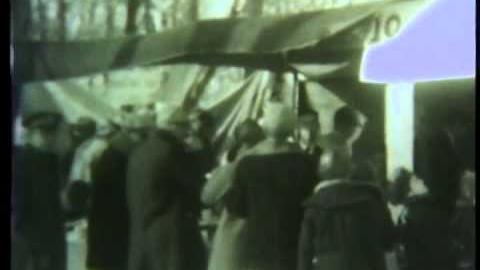 In an effort to gain publicity for the school and raise money for the Student Organization, the 1924 Carnival troupe took to the road and played at various locations around the Copper Country, including Marquette and Calumet. While the tour was not successful financially, it did bring Tech’s name before a great many people in the Upper Peninsula.

Carnival grew as the years went by, with the addition of a Carnival Queen and a parade in 1928. One of the highlights of the 1927 carnival was a sled ride behind an airplane at speeds up to 60 mph.

After 1929, there was a four-year lapse. In 1934, Blue Key Fraternity decided to bring Carnival back, assuming sponsorship. The Winter Carnival of ‘34 looked more like the Carnival of today, with a two-game hockey series with Minnesota, a parade, skiing, skating, and snowshoe races, and a dance to round out the two-day program. The focal point was the parade, with fraternities, professional societies, and other student organizations going all-out to make the biggest and best float. One of the comical sidelights was a hockey game between Michigan Tech faculty and local business owners. The higher-learning team was outwitted on the ice; the game went to the area merchants.

The snow statues displayed at carnival were constructed not only by University students and organizations, but also by local school children. Houghton Rotary Club offered a prize for the best statue built by area kids.

The tradition grew as designs and construction were innovated and information on building methods was passed on from year to year. Statues became bigger and more elaborate, designed to reflect the nature, goals, and accomplishments of the campus groups building them. In 1941 the civil engineers won first place with their statue of a bridge, the Tech Flying Club built a plane, and electrical engineers built a generator.

Once a ski tow was built on Ripley Hill—now known as Mont Ripley Ski Area and the oldest ski area in Michigan—ski meets became an important part of Carnival activities. In 1940, just after the tow was completed, the Michigan State Amateur Ski Championship meet was held there during carnival, and now meets are scheduled to coincide with Carnival every year.

Carnival activities slowly ground to a halt during World War II; the last attempt at putting one on was in 1943. It was plagued with problems. A roaring blizzard two days before judging practically ruined the snow statues, but a concentrated last-minute effort got the statues ready on time. Students were being drafted by the score, transportation facilities were limited, and intercollegiate hockey games were canceled. Tech did play a hockey game at that year, facing off against the Copper Country All-Stars.

The next Winter Carnival was in 1946. It was this year that skits became a part of the competition. Performances were put on in the former Kerredge Theatre in Hancock, which burned down in 1959. The skit competition, which now takes place at Michigan Tech’s Rozsa Center for the Performing Arts, remains one of the most widely enjoyed parts of Carnival.

Changes in Winter Carnival Events Over the Years

Organizers have always looked for ways to keep Carnival entertaining for audiences and fun for participants. The Ice Revue was a popular feature of earlier Carnivals. The professionally staged ice show featuring Copper Country skaters was held at Dee Stadium. In 1952 it was replaced by an informal skating party and dance. In 1953 a Boom Copper Day replaced the skating party-dance, with an old-time gambling hall set up in the Dee featuring gaming (with stage money, of course!), a chorus line of coeds, a barroom skit presented by the Tech Little Theatre group, and a soft drink bar. In 1954, the event was renamed Fun Night, and consisted of carnival booths set up in Dee Stadium and staffed by various organizations.

Fun Night was replaced in 1962 with a Concert by the Four Preps sponsored by the Student Council. Also initiated, or rather re-initiated in 1962, was the Flare Pageant. The spectacular event, which had been featured at past carnivals, lit the night as skiers made their way down Mont Ripley, forming intricate patterns with colored torches.

Check out the Winter Carnival timeline for more historical highlights:

A Big Top is pitched in front of the old Shop Building, and the Ice Carnival show is performed in a sawdust Circus ring.

Carnival lay dormant as the nation reels from the stock market crash of 1929.

A two-game intercollegiate hockey series with the University of Minnesota is added.

Lack of snow postpones Winter Carnival until February, a permanent change. With the establishment of Mont Ripley Ski Hill, a downhill ski racing meet is added.

Winter Carnival is canceled due to World War II.

Winter Carnival is enthusiastically resumed, and a Stage Revue is added.

Two buses bring 52 young women to Michigan Tech for the Sno-Ball—a tradition that would continue for some years.

The Flare Pageant down the ski hill is added; it's now known as the Torchlight Parade.

A Tall Tales Tournament starts, but is short-lived.

Snowballs were sent to Southwest Texas State University for a campus-wide snowball fight.

The most successful Canadian rock group of the 1960s and 70s, the Guess Who, a Billboard chart topper, performs two Winter Carnival concerts.

A Tug-of-War competition on ice was added. Human bowling and human sled dog races were soon to follow.