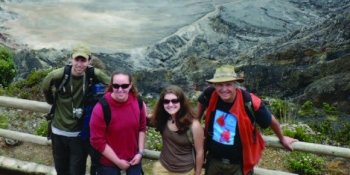 During his 41 years at Michigan Tech, Bill Rose did everything he could to get his students to places where they could be immersed in science. For many geology graduates, those trips were the highlight of their Michigan Tech education.

“I always took students with me on trips,” says the emeritus geology professor. “That was my priority. After all, the best geoscientists have seen the most rocks.”

Travel is life changing. It can lead advanced research, new discoveries, maybe advanced degrees. “We went all over the world, looking at volcanoes, doing research, and going to meetings,”he says. “I usually took more students with me than I had money for.”

Not all students could afford to travel, however. So when Bill retired in 2011, he decided to do something about that. “My dream was to create a quarter-million- dollar fund for student travel,” he says.

He launched the Geoscience Student Travel Endowment Fund with a personal donation of $100,000 to the Department of Geological Engineering
and Science, a good start but not enough. “I wanted to get it matched, so I wrote a letter to all my former students,” reminding them of how much travel had meant to their own education.

“They loved their trips, and they gave,” says Bill. What’s more, they haven’t stopped. “We still get contributions from alumni.”

"Before I came to Michigan Tech, I was able to participate in the student trip of a lifetime, visiting volcanoes and meeting volcanologists, all orchestrated by Bill Rose. So when I applied to graduate schools, Tech was my first choice. Right away, Bill organized a trip to Central America, which led to my dissertation and my first peer-reviewed publication. It was the first of many incredible trips, and I learned more every time. Bill taught us how to do international field work, emphasizing the importance of collaborating with local groups. I became a better student and human being because of those experiences.
After joining the faculty of the University of Puerto Rico, I followed Bill’s example, organizing trips to volcanic regions and always including students. They love it just as much as I did. So, when Bill asked me to contribute to the endowment, I said yes. There is no better way for me to give back to Michigan Tech.
"Lizzette A. Rodríguez Iglesias, Associate Professor and Director, Department of Geology, University of Puerto Rico—Mayagüez Campus