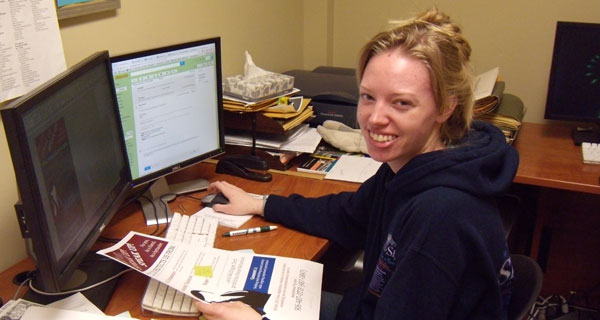 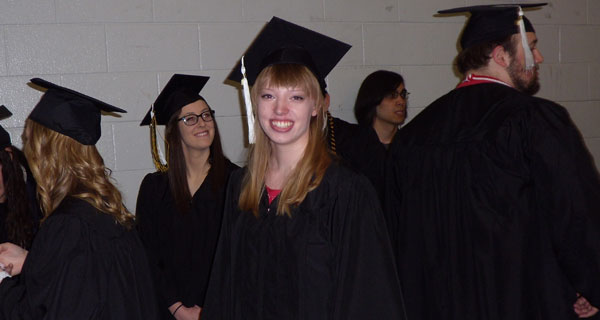 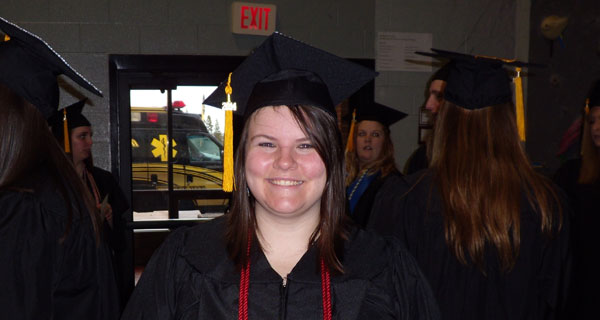 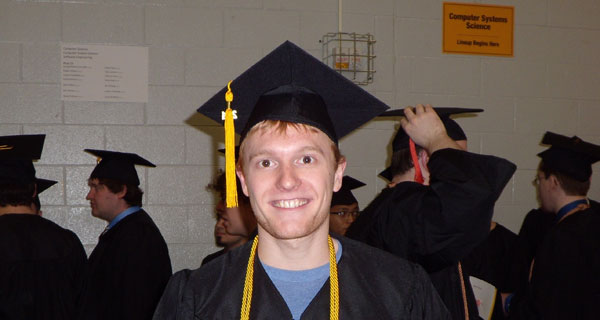 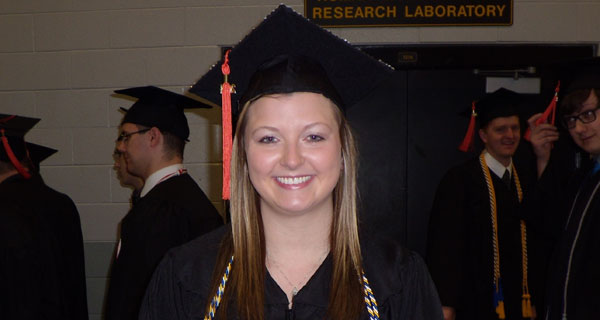 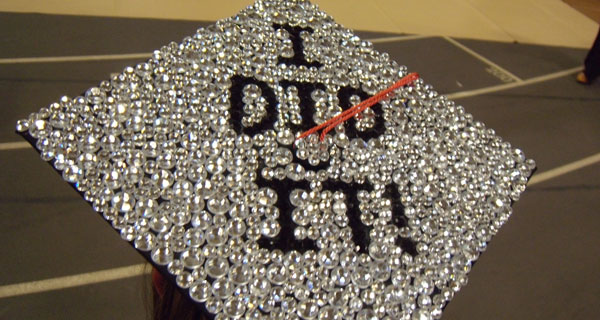 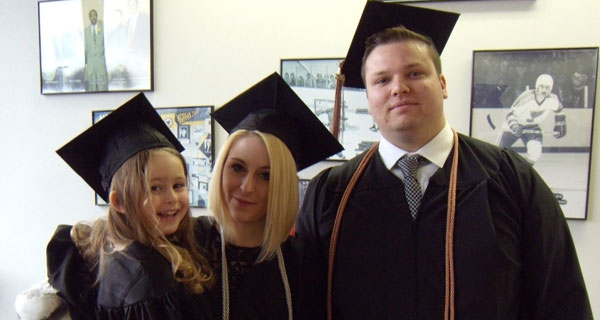 The biggest hit? Charlotte Skultety and her parents. [More.] 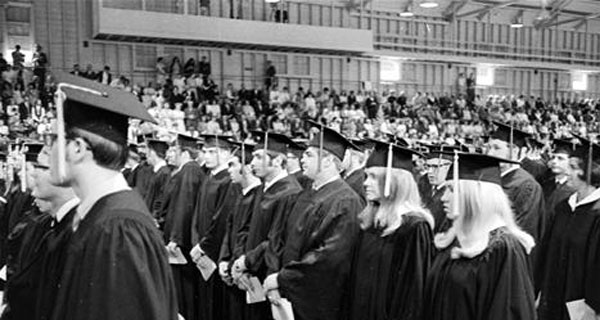 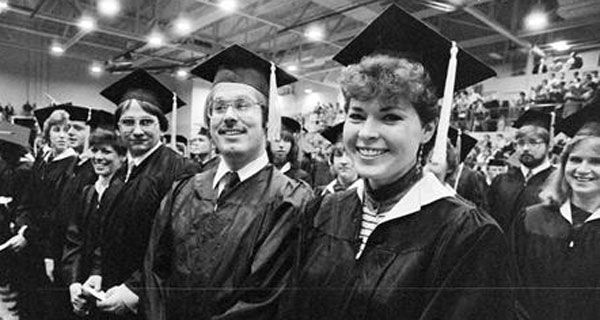 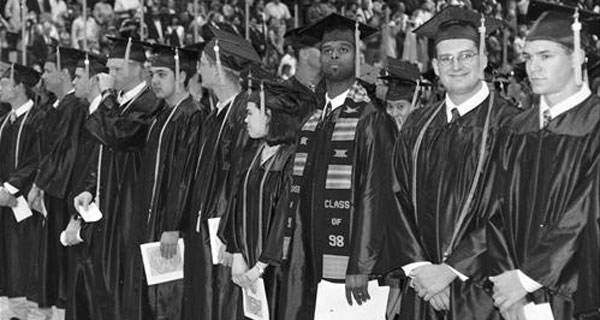 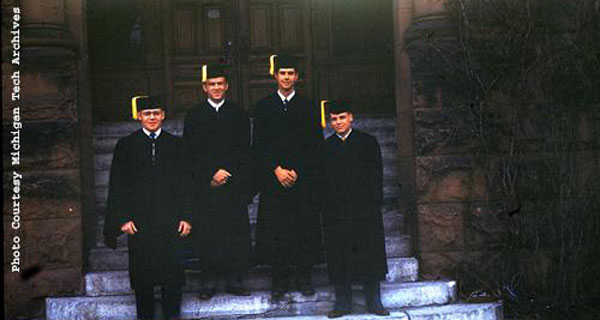 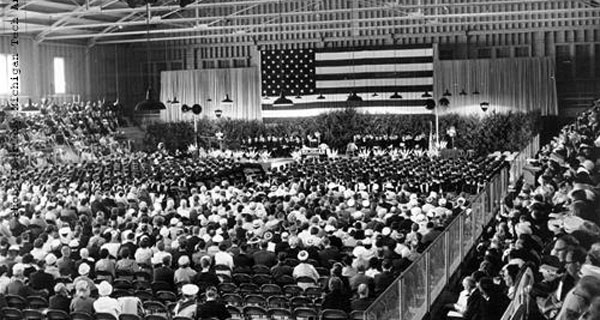 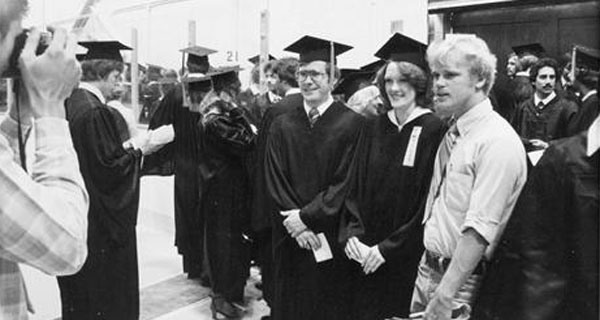 The students are the best part of working at Tech. As these Huskies got their diplomas (or at least the container with a note that said, “It’s coming. Pay your parking tickets,” or something like that), I had special connections to some of them.

Our office is lucky to have student employees who work hard, make us laugh, and keep us young. In fact, two of the Commencement stories below were written by students.

Lilly Manns was another great addition to our crew. She was a designer for us and also worked with the Velovations Enterprise team that designs and builds bicycles.

Her fondest memory? ”Participating in the first snow polar plunge tradition my first year,” she says. “After the first snow, we ran down to the Portage, jumped in, and then proceeded to run to all the saunas on campus! It was a really funny and happy bonding experience, and I’m still friends with most of those guys today.”

She says she’ll miss broomball, walking around campus, and the Tech camaraderie. She’ll be using her STC degree with Target in Minneapolis as a business analyst, near her hometown of Maplewood.

Another batch of students, who somehow got through Tech in four years, had to endure a special hardship. Their first class, literally, was an eight o’clock. Taught by me.

None of us could believe it had been four years and all the changes we’d been through. They admitted to not remembering much about the class other than, “Why did I sign up for an eight o’clock?”

Rob Sullivan, a CS and math major from Iron Mountain, will be working with Epic, who develop software for healthcare companies. He’ll be in Madison.

His fondest memory is  ”Winning the all-nighter statue competition freshman year.” He’ll miss his friends and all the cool people here, and he won’t miss shoveling snow and taking exams.

He played a lot of sports as a student, including broomball and Frisbocky, where he broke his hand. He had a lot of family coming up from Iron Mountain.

Alli Struthers, a bio sci major from Hancock, is planning on attending grad school and get into water ecology, maybe at Tech.

She enjoyed her sorority, Phi Delta Chi, and working on the Student Entertainment Board. ”I also liked some of the labs, like limnology, where we got to go out on the Agassiz,” she said. “And the tropical biology course that we had in the Bahamas.”

She made many friends in her classes and will miss Tech’s sense of community. “You say hi to everyone.” 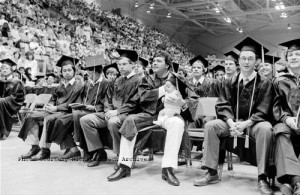 1984: What was his/her degree in?
More older photos are in the slideshow above.

Finally, Ashleigh Sleeper will remember the first time she went snowmobiling in the Keweenaw. “It was absolutely beautiful riding around in the snow-covered trees.”

She’ll miss her friends, who are  fanning out around the country, and she won’t miss the snow. She was involved in Epsilon Pi Tau Honor Society and the Michigan Tech Women of Promise. She was also a tour guide for Admissions.

Her plans include using her CNSA degree in IT for Dow Corning in her hometown of Midland.

Well, they looked grown up, a long way from the sleepy-eyed first year students who endured that eight o’clock. We’d seen many changes, lost some loved ones, and gained some new ones.

It’s always rewarding watching them walk across the stage, especially when we know them. They are are off to a great start, and we hope we helped a bit along the way.

Snowfall Totals
In the ultimate Freudian slip, I forgot the totals last time. That’s beyond denial.

August and Elizabeth Skultety weren’t the only ones in their family wearing caps and gowns at  Spring Commencement Saturday.  Their 3-year-old daughter, Charlotte, was right there with them in a miniature cap and gown in honor of her parents’ graduation from Michigan Tech. “All of college has been a family experience for us,” said Elizabeth, who . . . [ Full Story ]

Michigan Tech is known for generations of traditions, from the Zamboni song at hockey games to Winter Carnival and K-Day. And while some families can proudly say that they and their children graduated from Michigan Tech, few can match the Kilpela family of Atlantic Mine. The Kilpelas have seen six family members graduate from Michigan . . . [ Full Story ]

Damp wind and scattered flurries were cold leftovers from an overnight slush event: a perfect late-April Keweenaw send-off after 29 years of teaching at Michigan Tech. Mark Roberts, professor of economics, lectured on alternative sources of electricity on his last day in front of a class. “Keeping up to date with the constant change,” was his biggest . . . [ Full Story ]

In our quest to get a history of our mascot, we are still looking for anecdotes and photos from those who have warn the costumes. In our research, we have discovered two “wolves” who appeared to have worked the sidelines and ice in the late 1980s and early 1990s. We’ve included photos here and

We are on the home stretch for ordering an engraved paver that will be placed near the new husky dog statue.

Two sizes of pavers are available:

The Michigan Tech track and field teams wrapped up the three-day 2014 GLIAC Outdoor Track and Field Championships on Friday (May 2) at the SPIRE Institute. The men’s team finished ninth out of 14 teams with 32.5 points, while the women were 15th with three points. ”I’m pretty excited about how the teams did,” Tech coach . . . [ Full Story ]

Michigan Tech men’s basketball player Austin Armga was named to the Basketball Coaches Association of Michigan College Academic-Athletic Team. Armga was named an All-American and Academic All-American in 2013-14 while leading the Huskies to a 24-8 record and an appearance in the NCAA Midwest Regional title game. The guard from Waupun, Wis., scored 736 points . . . [ Full Story ]

Can you find yourself in here?

Hi Dennis,
Concerning the (Music On and Off Campus blog), mystery solved. The entertainer described was Jim Croce, who entertained at Tech along with his wife Ingrid in, perhaps 1971 as ‘The Croces’. I still remember the all nighter in Freda…………

Luke: I never heard of it. Evidently, I need to get out more!

It was fun to see Loyal O’Leary’s ticket for The Guess Who concert in 1973. I was part of the team that put the event together. The opening act was indeed to be Bruce Springsteen, and he was so unknown we had conflicting information about how to spell his name. On the tickets we spelled . . . [ Full Story ]

Hi Dennis,
We enjoy the stories from your email column.

Anybody out there remember back in 1968 an underground bar and entertainment place called “The Cellar?” It was located under the JC Penny store or there abouts.

We visited it several times. A young man, Ted Hillfinger, our age was singing some great songs. . . . [ Full Story ]

Dennis,
Just wanted to say thanks for the article on Physics Faculty Emeritus Don Daavettila. I was fortunate to be a student in his Nuclear Engineering class my senior year in 1988-89. We spent a week at the University of Michigan using their nuclear reactor to complete some lab tests for the course. I . . . [ Full Story ]

Dennis,
During the summer after my first junior year at Tech, I received the bum’s rush letter from Tech more than suggesting I not return in the fall. They rightly sited my 0.0 grade point average that spring. A confluence of events, not the least of which was the announcement that my girl friend . . . [ Full Story ]

Dennis,
The blonde at the far right (you have to click on the picture to see him) is Andy Duca and right in front of him is Jim Schultz. They both lived in DHH fall of 83 and both joined Delt Sigs.

I attended the Summer Youth Program in the summer of 1973 and I do not remember work being done on the new EE building, but my classes were in Fisher Hall (and the SYP lived in East Coed hall that year) so I may just not have noticed any work being done. I again attended . . . [ Full Story ]

Dennis:
I enjoyed the picture of the old Houghton Train Station. It was quite a shock to me when I stepped off the train there (it was the “Copper Country Limited” from Chicago) on the 15th of September in 1949 and there was snow in the air! I had traveled from Ossining, New York . . . [ Full Story ]

Dennis,
Re Cal Wacker’s query about priests, rabbis, etc, I know that the Catholic archbishop of Portland, OR is MTU grad Alexander Sample. Not too common to have a metallurgical engineer for an archbishop, I’m thinking.

Apply for the Cash RewardsTM Visa Signature® credit card that rewards customers with up to 3% cash back on certain purchases, all while supporting Michigan Tech Alumni Association initiatives for students and alumni.

In addition to earning cash back rewards for yourself, use of this card benefits Michigan Tech at no extra cost to you!

No on-campus jobs this time.