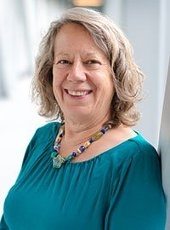 Dr. Linda M. Ott received her PhD in Computer Science from Purdue University in 1978. She joined Michigan Technological University’s faculty shortly thereafter. She chaired the Department of Computer Science from 1996 to 2010. In 2019 she again took over the duties of Chair, as the Department transitioned into the newly formed College of Computing.  From March 2015 through May 2018, she served as the Associate Dean for Special Initiatives in the College of Sciences and Arts.

Her early research interests were in software engineering, including software processes, software measurement, and software engineering education. She has been a co-Principal Investigator on nearly $1.5 million in grants from industry and the National Science Foundation. Ott is a 2010 recipient of the ACM SIGSOFT Retrospective Paper Award for the paper "The Program Dependence Graph in a Software Development Environment," co-authored with Dr. Karl Ottenstein and published in SDE 1, Proceedings of the First ACM SIGSOFT/SIGPLAN Symposium on Practical Software Development Environments, April 23-25, 1984. Ott taught Advanced Software Engineering at Siberian State Aerospace University in Krasnoyarsk, Russia as a Fulbright Scholar in 2012. She also taught Ethical and Social Aspects of Computing at Beijing Normal University - Zhuhai in Zhuhai, China during the summer of 2011.

Ott received the Michigan Technological University Inaugural Diversity Award in 2014. She was a founding organizer of the Michigan Celebration of Women in Computing and of the NCWIT Aspirations in Computing Michigan Affiliate Award for high school women. She was the project lead for Michigan Tech’s NCWIT Pacesetters team and for Michigan Tech’s NCWIT Extension Services for Undergraduate Programs team.  The team's efforts resulted in the Department being awarded an NCWIT Extension Service Transformation Award Honorable Mention in 2020 for excellence in recruiting and retaining women in computing-related fields.